Your Morning Dump... Where Danny is Janos? 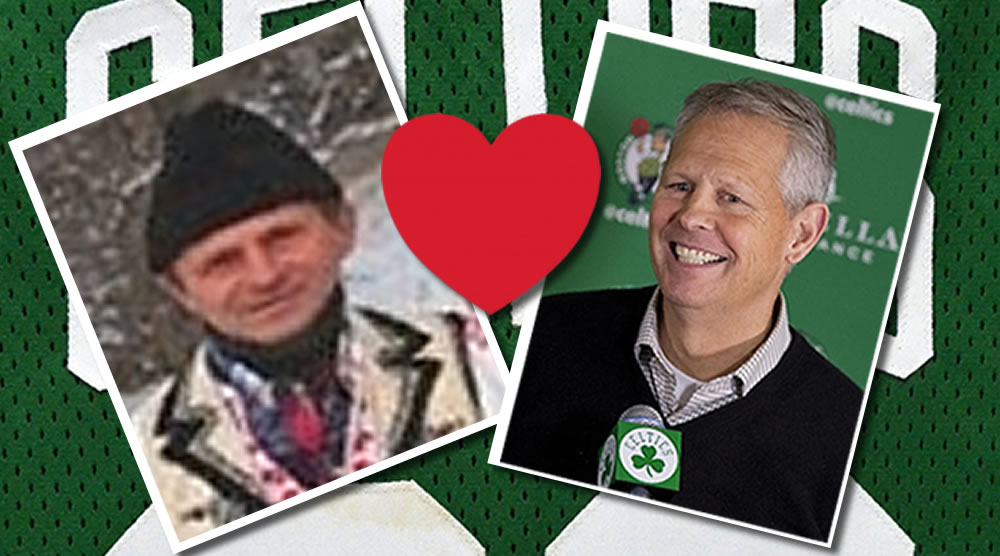 Your Morning Dump... Where Danny is Janos?

And, for those of you who haven’t the time/freedom to listen to Ainge, the Ben Rohrbach synopsis:

Danny Ainge to @Toucherandrich on possibility he's @isjanosnba:"I like that, actually. That’s a huge compliment. That’s my secret whiskey-drinking account. I can pretend to be a whiskey drinker and eat a lot of soup and have an unemployed son. He’s who I always wanted to be."

Y’know. Eventually, Danny’s gonna lose his touch and retire, and he’s gonna be a tough act to follow. I’m doing my best to savor these moments when the team that I, more or less by chance, ended up rooting for, happens to also be run by a guy who isn’t a moron–and when you realize that two of the other teams I root for are the Vikings and the White Sox, you can understand why following the Celtics is so much more fun.

Another fun aspect of the chaos in Sixerstown is realizing just how little respect the Colangelos have in the NBA community.

We all know that Silver’s predecessor really liked Jerry–and tried to play ‘matchmaker’ between him and the Knicks, and there’s a pretty compelling pile of evidence that Adam was the point man involved in getting Colangelo pere involved in the Sixers mess, and that Colangelo pere, of course, brought along Colangelo fils to replace Hinkie (who got jobbed, of course, but was also a terrible GM).

So the jesting about the Colangelo burner accounts that’s come from people in the NBA has been interesting to see. If Jerry Colangelo was regarded as the ‘savior’ of professional basketball back in the early 2000s, his legacy has pretty much dwindled by now into a guy who got his semi-competent progeny a plum job with a marquee franchise.

When asked about the league’s feelings on the same teams playing in the Finals for the fourth consecutive season, Silver pointed out that the Warriors and Cavs have the two highest payrolls in the league at $137 million each. He went so far as to raise the specter of a hard salary cap like the NFL’s that could potentially even out the league’s competitive balance.

“It’s something that we’ll continue to look at. There are pros and cons to doing (a hard cap),” Silver said. “Historically, one of the issues in our league was we didn’t necessarily want to break up teams.”

The league is not going to adopt a hard cap. As much as individual teams in certain markets hate ‘super teams’, as long as they’re good for the league’s bottom line they will still be possible. The Bird rule is aptly named–the league’s not going to create a system where a team can’t re-sign its best player(s) because of the cap.

But you can take the league’s extremely early talking point as evidence that (1) there is very strong resistance to getting rid of the punitive luxury tax, and (2) the next round of contract negotiations is likely to be rather contentious.

The league is hoping to pick up a slice of the potential sports gambling boon, but the nature of the Supreme Court’s decision and the gridlock in Washington is such that it will be very difficult for the league to get a piece of the action. While it’s possible all of the sports leagues, by banding together, will be able to get federal legislation passed that will guarantee them a piece of the pie, there will be strong resistance against national legislation on the part of various state governments and casinos–the former will want as much control as possible over the cut they retain from the revenue and the latter find local governments much easier to manipulate. Instead of glad-handing and wining and dining the densely populated thicket of fixers, influencers, lawmakers and assorted other disreputable folks that tend to cluster around DC, the NBA (and the NFL, MLB, NHL, etc.) will need to spread their resources out to fifty different statehouses, convincing each of them to give the league (which is only present in 21 of the 50 states) a cut of money that they are under no obligation to deliver.

I don’t necessarily think these are golden days for the NBA, not with Cavs/Warriors IV now underway (the first time that’s happened in any major US league), but they are definitely fat times for the players, and I don’t think they’re going to last.

George Hill made the first of two free throws with 4.7 seconds left after being fouled by Klay Thompson, but when J.R. Smith secured the rebound of the second, he dribbled back toward halfcourt instead of shooting, apparently thinking the Cavs had a lead.

I would like to introduce you to Earl Scoggins:

Earl watched the Finals last night. It was the first basketball game he’s watched since catching the Syracuse Nationals and the Fort Wayne Pistons in ’55.

Earl is the only person in the lower 48 states who was actually surprised that JR Smith did something exceptionally stupid last night.

LeBron was really upset with JR Smith, and really frustrated with losing a game by 10 points after scoring 51 (dang near half Cleveland’s offensive output). That’s a real about-face for the “King”.

NBC Sports: Ainge on Kyrie’s Game 7 absence: ‘It’s being overblown’ (co-sign on this! Fortunately, I don’t think anyone on the team cares) | Blakely: Tough to ‘Trust The Process’ now

Boston.com: ‘I just felt like it was bad for our franchise to be able to trade away our superstar point guard’  (LeBron talking about the Irving trade, in case the headline made you think of IT–he made a phone call, you know, to try to prevent it)