Pivotal June gets off to rough start for Phillies 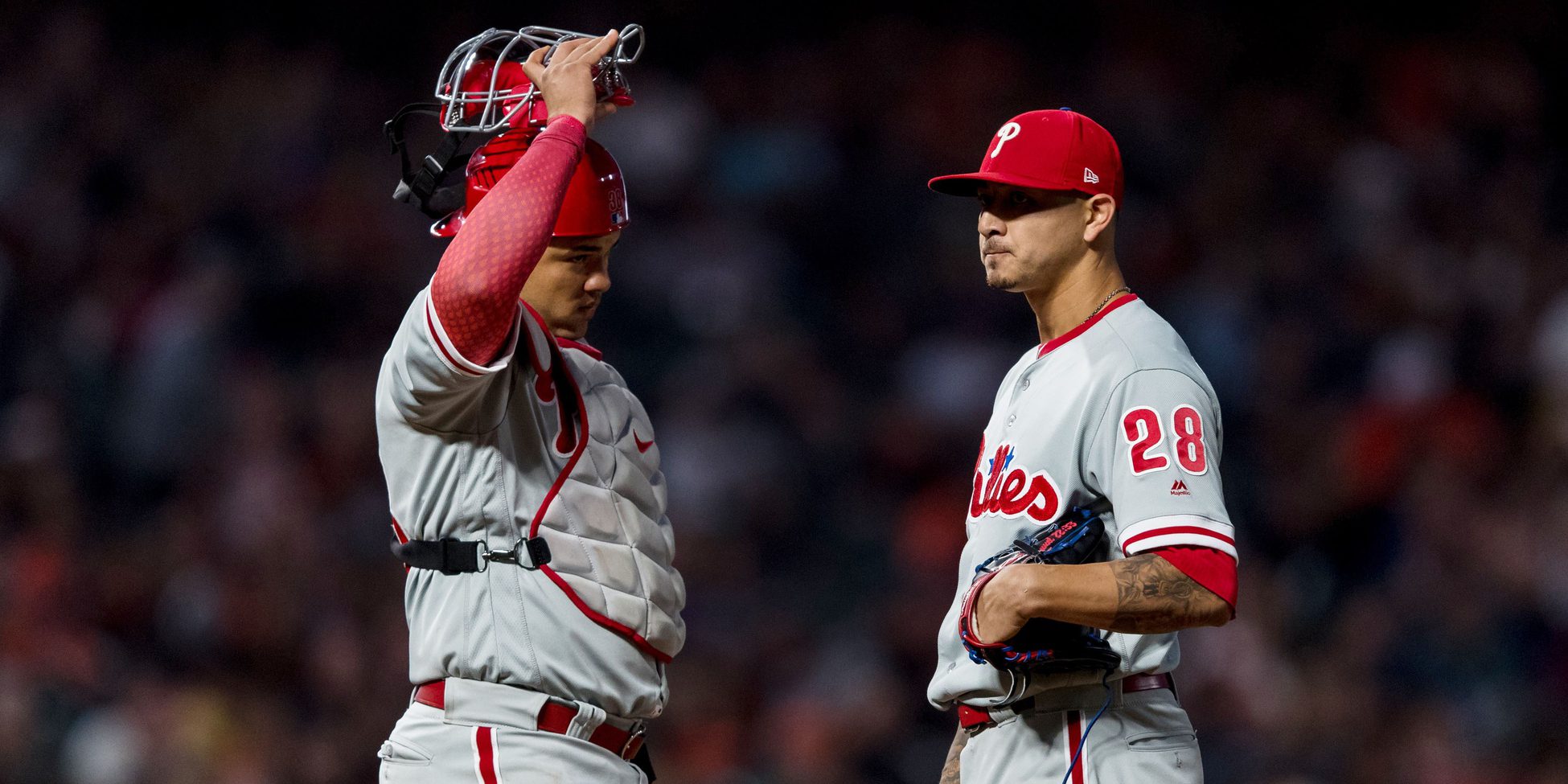 Pivotal June gets off to rough start for Phillies

It is difficult to find much of a bright side from the weekend three-game sweep at the hands of the San Francisco Giants. The Phillies scored just one run in the series, and that came off the bat of pitcher Jake Arrieta, the sixth of his career. But let’s take a look at the current state of the Phillies as they take a day off and prepare for a road series in Wrigley Field before returning home.

Starting pitching has been pretty solid

In the first seven games of this current road trip, the starting pitching has, for the most part, been pretty good. There was the Aaron Nola gem in Dodger Stadium to give the Phillies a series-split against the Dodgers, and Jake Arrieta picked up the other win in LA before five outstanding innings in San Francisco and the wheels fell off in the sixth inning of Sunday’s game. The Nola-Arrieta combo has been the most reliable tandem for the team this season and that should continue.

What was encouraging on the road trip was the pitching of Vince Velasquez, even though the Phillies took a loss in each of his starts on the west coast. Velasquez pitched into the sixth inning and allowed two runs on three hits with six strikeouts in the series opener against the Dodgers, but the bullpen imploded and the Phillies took one on the chin like Rhys Hoskins. Velasquez got into the seventh inning in his next start in San Francisco, striking out nine and allowing just one run on five hits before coming out. He certainly pitched well enough to pick up at least one win, but the bullpen failed him in one game and the offense failed him in the other. Velasquez continues to show signs of growth on the mound though, and having him as a reliable arm in between starts by Nola and Arrieta would be a boost.

Zach Eflin and Nick Pivetta struggled on the trip, which was disappointing but perhaps not too shocking to see. Eflin has not gotten a game to the sixth inning since May 7, when he reached the seventh inning. Pivetta also labored in his start against the Giants, throwing 91 pitches in just four innings and allowing three runs on five hits and three walks. But these pitchers are just 24 and 25, respectively, and they will continue to develop. How they mature and grow through their baseball growing pains will determine how deep the starting rotation can eventually be.

The bats going silent is alarming

The top three batters in the lineup on Sunday went a combined 0-for-12. That’s just not good for business.

Odubel Herrera is hitting .305 but he has been going through a little bit of a funk, and there is nobody in the lineup picking up the slack to make up for it. The WAR numbers for the team are not flattering either, with Herrera leading the team with a 2.0 WAR and Cesar Hernandez the only other player with a WAR above 0.6 (1.8 according to Baseball Reference).

There is plenty of blame to go around for the offensive woes of the club right now, and it is fair to start calling out some individual players for their lack of production now that we have arrived in June. One player who is deserving of some critical attention is first baseman Carlos Santana, who is hitting a career-low .218 through 57 games. For a $20 million player, that simply is not OK. But perhaps Santana will come to be the offensive spark this Phillies team desperately needs now that the summer months are here? One can only hope at this point.

Phillies still in NL East hunt, but can they stay there?

After a totally abysmal weekend series in San Francisco, the Phillies wake up on their off day in Chicago sitting three games out of first-place in the NL East. All things considered, that is far from terrible, right?

While the Phillies were floundering by the bay, the Atlanta Braves were finishing off a huge weekend series against the Nationals, winning three of four including Sunday’s walk-off victory to pad their lead in the division (that’s four walk-off wins for the Braves since May 20, by the way). The hope was the Braves and Nationals would split so the Phillies at worst could not lose much ground if things went awry out west.

The NL East Division is looking more and more as though it will be a heated race that goes down to the wire, but if the Phillies are going to remain in that hunt then the offense must pick things up. Perhaps more damaging this weekend was where the Phillies now sit in the NL Wild Card standings. The west coast swing dropped the Phillies into fourth-place in the NL Wild Card picture behind the Cubs, Nationals, and the St. Louis Cardinals. And with the Cubs next up for the Phillies, it seems another huge series is on this team’s hand right now.

It is still early in the summer, and there is plenty of baseball to be played over the next four months. While it is not time to hit any panic buttons, it is fair to assess what the Phillies are right now. What they are is a baseball team with no offensive threats right now, and that will not get them very far even with stellar pitching. The hope is this team tunes into that old Charlie Manuel mantra that it is now hittin’ season and the bats start turning things around quickly.

The month of June is a major test

The @Phillies remaining opponents in the month of June, have a combined record of 200-143 this season.

If the Phillies are still within striking distance of the NL East and/or wild card spot at the end of this month, that would be a major victory for the Phillies, because this is going to be a very challenging month for a team with bullpen concerns (aside from Seranthony Dominguez) and no life on offense.

Things should get a little easier in July before the all-star break, but let’s see how Gabe Kapler maneuvers the Phillies through their toughest month yet while addressing as many questions as they have faced all season.