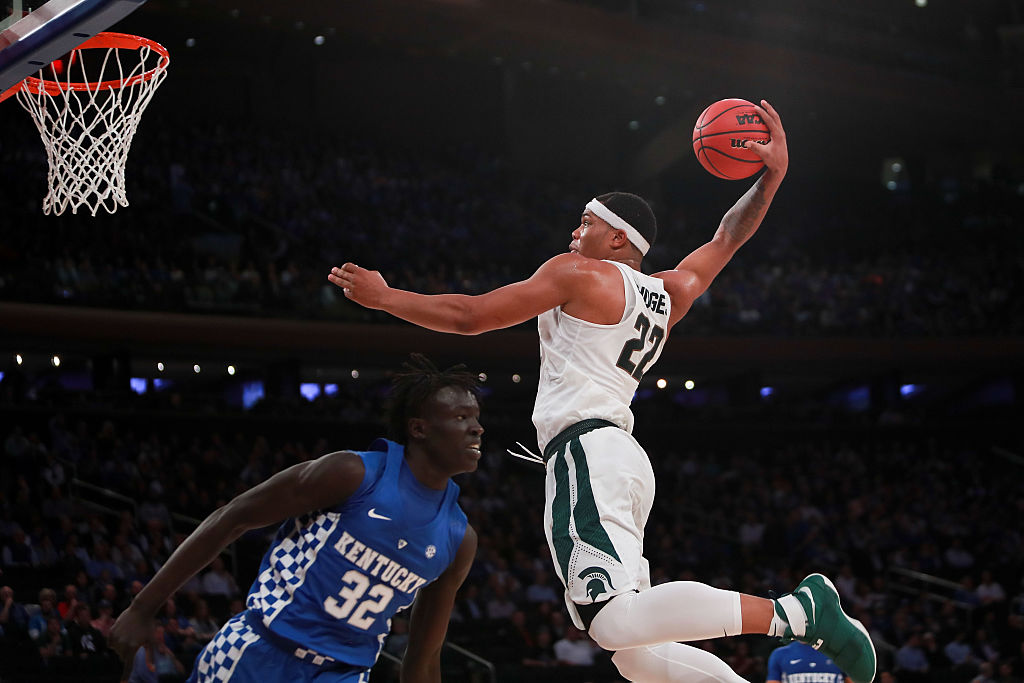 Position-less basketball is in fashion these days. A decade ago the question Miles would struggle answering would be which position does he fit into the lineup? Being a “tweener” used to be a weakness. Miles will try to prove much like another recent Spartan draftee (Draymond Green) that his athleticism and versatility will compensate for his stature. Bridges finds ways to contribute all over the floor. He’s doesn’t mind carrying the offensive load, whether the game plan requires him to penetrate or stay closer to the perimeter. The jump shot has progressed and his free-throw percentage improvement from 68 percent to 85 percent is promising. NBA teams will need him to knock down NBA 3’s with ease. That gravity will allow him to utilize his other tools more effectively. Not being a true point-forward, Bridges still found ways to make plays with the ball and distribute a little while operating primarily as the small forward alongside a supersized frontcourt of Jaren Jackson Jr. and Nick Ward for Michigan State.

Defensively, Miles oozes potential. His quickness, strength, and agility allows him to switch effectively between post and perimeter defense. Nobody can stay in front of the best guards in the league every time, so Bridges will simply need to show that he can contest wings and prevent easy, straight-line penetration to the rim. In the post, adding some more muscle will help him bang even better. His 6-7 stature and 6-9.5 wingspan will require him to contest without fouling. Look at P.J. Tucker for an example of a player with similar proportions who’s clamping up wings and bigs. Spartans are gritty, and Miles can become a very good rebounder.

In a motion offense, Bridges can be a jack-of-all-trades energy glue guy. I have some concerns that he will never be more than a third or fourth option on a good NBA team without a drastic improvement to his ball-handling. Where he can differentiate himself is defensively. Wing defenders are extremely valuable in the current landscape, and his blue collar approach can help him develop along a similar path as Draymond Green laid out. He isn’t as strong or long, which will prevent him from capably defending true big men. That is why he needs to watch tape of P.J. Tucker in the 2018 Western Conference Finals. Ideally, he can land on a team where he plays wing and small ball 4. The 76ers are looking for a player like that. Will they prefer Mikal or Miles if they can have their choice between the Bridges? The Cleveland Cavaliers definitely need wings that can defend. Same with the Knicks. Bridges would fit a bunch of teams in the bottom half of the lottery.