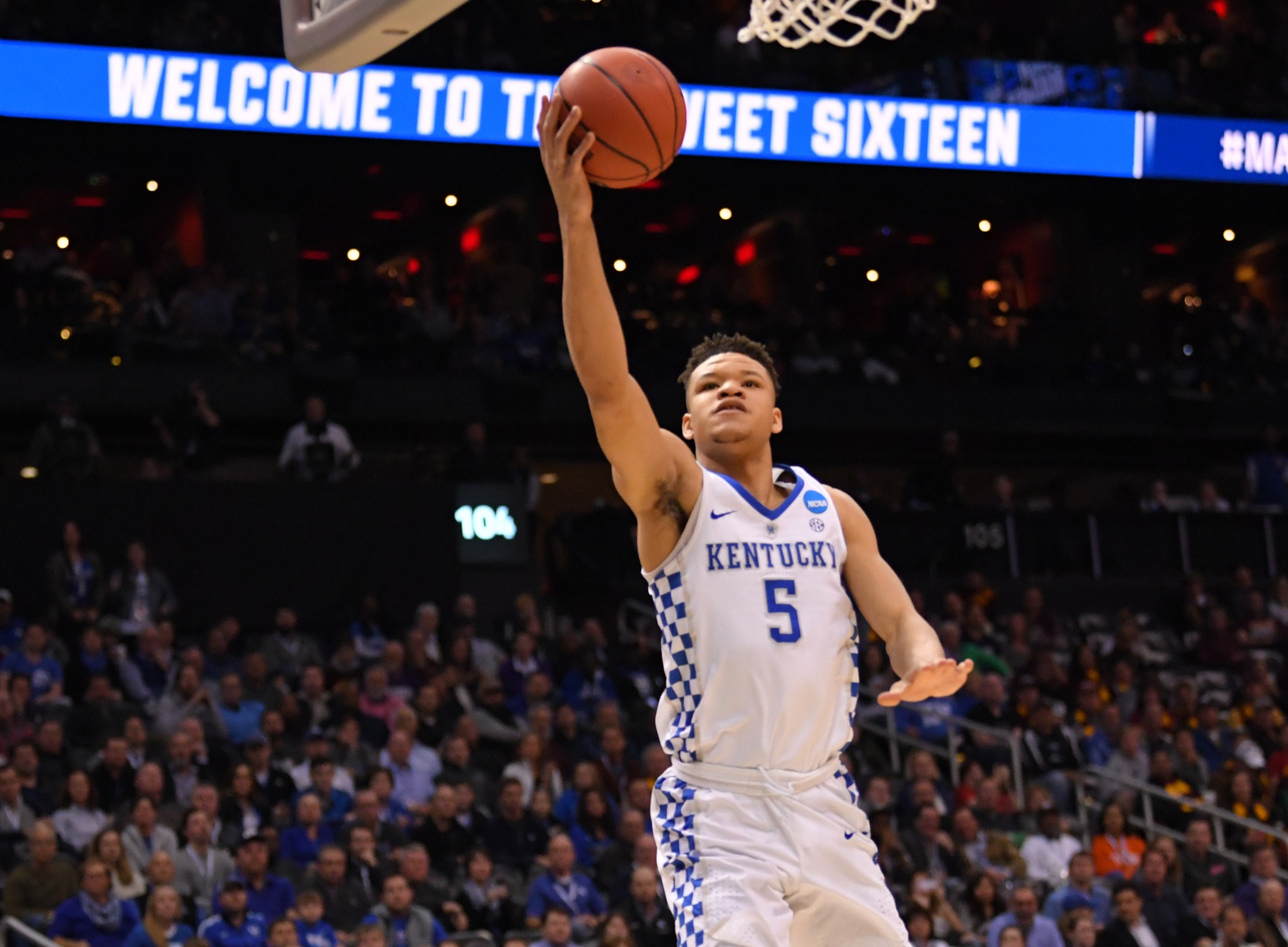 Kevin Knox’s physique stood out to me this season at Kentucky within the context of John Calipari’s stable of NBA prospects. Yet to see his 19th birthday, the 6-9 wing with near-7-foot wingspan projects as an ideal floor spacer. His efficiency wasn’t great at under 45 percent from the field and under 35 percent from three and his playmaking was non-existent. Those warts did not prevent me from drooling over his smoothness, fluid stroke, and ability to find his spots on the perimeter. Plus, there’s only so much dribble driving that anybody can accomplish on a team that saw its streak of most consecutive games with a made three-pointer ended this season. To put it nicely, the Wildcats did not have much perimeter shooting. Nevertheless, improvement with Knox’s handles and penetration in the restricted area would result in him showing real shades of Carmelo Anthony. Unfortunately, he plays more like old-Melo rather than young-Melo right now. Calipari also rarely allows his players to stand out individually, which was to Knox’s detriment, as he was stuck playing off the ball a lot. His offensive game is much more of a projection rather than a reality right now, and I don’t expect him to take the league by storm like former Duke Blue Devil Jayson Tatum.

Defensively, Knox has the strength and length to switch out on the perimeter and contain forwards in the paint. He isn’t the most explosive or quickest athlete, so he’ll require plenty of development with regard to his defensive principles. NBA teams will look forward to molding him into their system as his hoops IQ is high. Rob Covington has very similar size and length to Knox (without the broad shoulders) and provides Kevin an example of someone to emulate. Don’t expect Knox to ever become a league leader in deflections, but becoming an above-average defensive difference-maker is reasonable.

Without showing star potential, Knox provides a safe bet in the 10-20 range of this draft class for NBA teams hoping to mitigate risk. His worst case scenario is probably a role-playing floor-spacer with good size and length. Ideally, he develops into an effective defender and gains confidence in his jumper. Two-way wings with size and strength are good fits for any offensive and defensive system emphasizing spacing and positional flexibility. I would be surprised if Knox sneaks into the top 10, and I really like his fit on the Clippers. If they pass on him at 13, then Denver should strongly consider him, especially if they anticipate Will Barton’s contract becoming an issue and/or Wilson Chandler doesn’t re-discover the fountain of youth. Knox should be able to contribute right away in in a role that doesn’t require him to carry a heavy load or be a primary initiator of the offense.