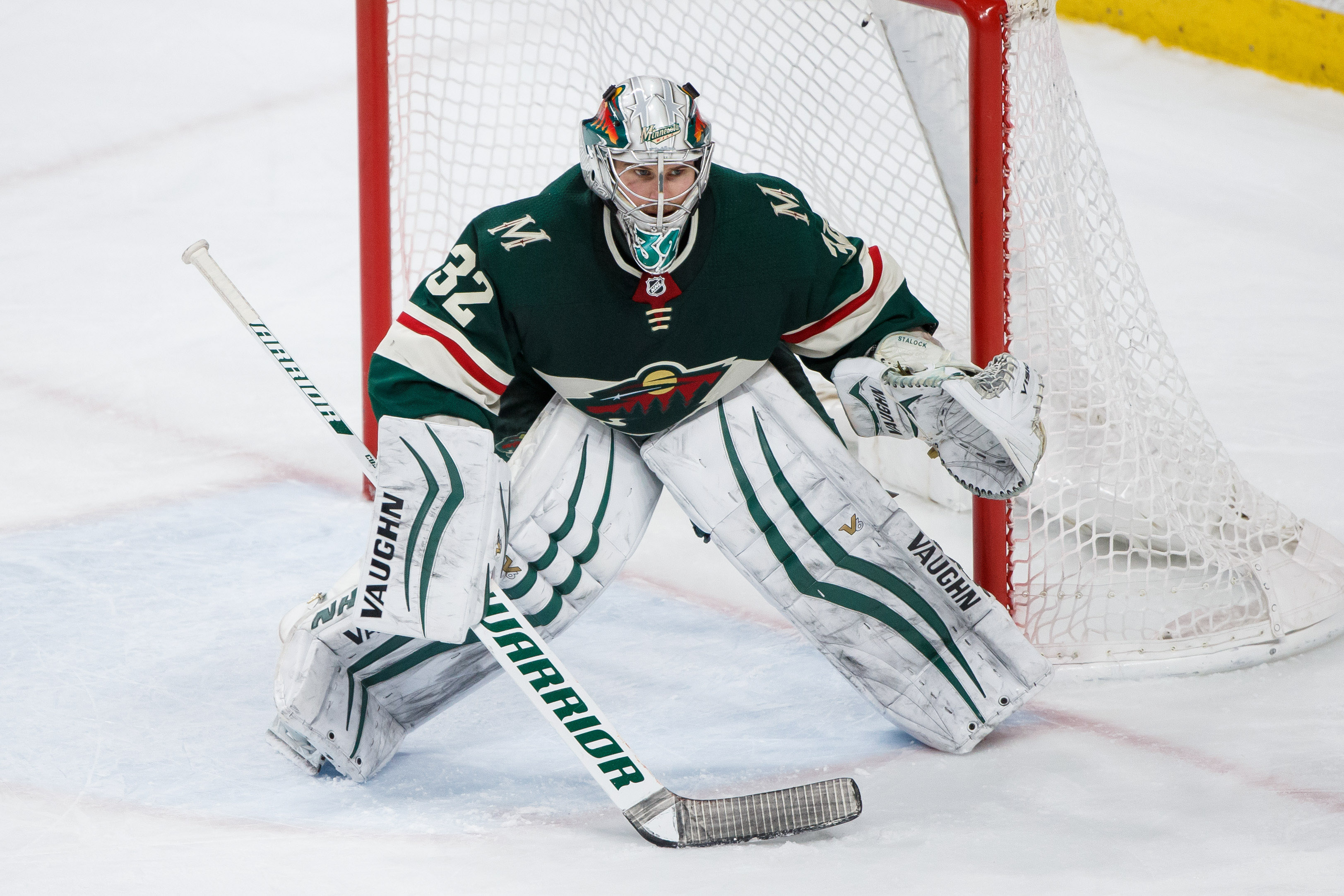 A recent poll on HockeyForums.net asked a pretty simple question to Wild fans.  What Wild player do you find to be the most significant on the team?  The general consensus was goaltender Devan Dubnyk.  Most recognized that the Minnesota Wild’s chances are hinged on the play of Dubnyk and even if he has an ok performance the team’s chances to win are jeopardized.  Luckily for the Wild, most nights Dubnyk is pretty solid.

This season, the Wild were not quite as dependent upon Dubnyk because of the play of Alex Stalock who provided adequate play in the crease.  Stalock seemed to have a confidence that Darcy Kuemper could never seem to maintain.  For many Wild fans, they remember watching the athletic goaltender in his days with Minnesota-Duluth Bulldogs or as a prep star at South St. Paul High School.  His easy going personality makes him easy to like and his athletic style makes him fun to watch.  In this day and age of big-bodied butterfly goaltenders who play angles so precisely they’ve made the position seem more scientific than an art, Stalock is more of an artist.

Yet there is reason to be concerned.  The Wild’s American Hockey League affiliate in Iowa failed to make the playoffs for a 5th season in row (6th if you count their last season in Houston).  Part of the reason for that has been goaltending which has been inconsistent.  Take this most recent season where Niklas Svedberg started the year strong but then the wheels fell off in March (not just for him, but for the whole team) and they fell out of post-season contention.  Steve Michalek was ok, but he had his ups and downs as well.  Prospect Dereck Baribeau started the season as Quebec’s starter only to be supplanted a 1/3rd into the season and only was played sparingly after that.  The only goaltender that had a great season but isn’t in the organization was Kaapo Kahkonen in the Finland’s Sm-Liiga and so the Wild signed him to a 2-year deal.  So needless to say its time to refill the goaltending cupboard.

The Wild’s top priorities as I see them on an organizational and prospect level should be at the following positions.

1. A mobile, but physical defenseman that will eventually play in its top 4 ~ The Wild blueliners are mobile and decent puck movers but the playoffs demonstrated their inability to prevent shots and win battles for pucks along the wall.  Minnesota has not had a true physical defender since Willie Mitchell.  The Wild need a player that makes them more miserable to play against and be used in key defensive situations like the penalty kill.  Iowa farmhand, Nick Seeler performed admirably, but he’s not skilled enough to be on the team’s Top 4 on a regular basis.

2.  A skilled, speedy scoring forward – Shoot-first players have not been a common sight in an organization that traditionally demanded two-way play.  That has meant the Wild have at times passed on adding skating and skill as they chose to draft character players instead.  That needs to change, Pittsburgh and Vegas are great examples of how a great skating team can overcome teams that choose to play a heavy game and the Wild who are not known for physical play would be wise to embrace that approach.  That means they’ll have to draft speedy, skilled guys to make it happen.  A Jonathan Marchessault-type would be very welcome here.

3. Drafting a long-term back up or replacement of Devan Dubnyk ~ Dubnyk isn’t going to last forever, and he’s still under contract until 2020-21.  It would be wise to have a goaltender developing to replace him or at least push hard for the back up role.

I am not clamoring to have him leave but the Wild must start preparing a potential replacement for him.  Good thing for the Wild is Fenton and the Predators have been outstanding at drafting goalies as Pekka Rinne and Juuse Saros prove.  Although the old drafting axiom is you never take a goaltender with your 1st round pick.

So who is available?  Check out my 2018 NHL Central Scouting Movement tracker for some ideas.  This article is part 3 of 4 where we look at what goaltenders are out there that fit the needs of the organization.

Talent Analysis:  Mandolese is your prototypical NHL goaltending prospect who is big and athletic.  The Montreal-native has good rebound control and uses proper angles and his large frame to make most saves.  He tracks pucks well through traffic and is calm and efficient in his movement from post to post.  Has demonstrated an remarkable ability to recover on plays in around the net, moving back into proper position quickly.  He is the kind of goaltender that has opposing teams shooting for the corners (and missing) because they know he’s tough to beat.  Some feel his game lacks structure and that he has a tendency to sit a bit deep in his crease but those are all fairly simple issues to work out.  He handles the puck pretty well and likes to dish the puck to his defenseman.  Seems to be a great candidate to become a starting goalie someday.

Bottom Line:  Size, check.  Athleticism, check.  Rebound control, check.  Poised and smart, check.  This is an ideal goaltender you would want to groom into a future starter.

Talent Analysis:  What really separates Skarek from most other goaltenders his age is his resume.  He may be 18 years old but he’s already spent 2 full season in the pro’s in Czech Republic’s top league.  He too combines prototypical NHL size but with shades of Dominik Hasek to his game.  Like Hasek, he will contort himself however he needs to stop the puck and his compete level in the crease is outstanding.  Skarek is aggressive and likes to move out to challenge shooters and has a good glove but some scouts feel he holds it too low.  Scouts like that he doesn’t drop to his pads quickly and he still managed to cover low-lying shots very effectively.  He has good rebound control and is a decent puck handler.  The Jihlava, Czech Republic-native had kind of a rough World Junior Championships but he had a decent playoffs this spring in the Czech Superleague.  He’s a big goaltender who makes himself big with his assertive style in the crease.

Bottom Line:  Another goaltender with starting potential, who plays big in his crease and seems to have a lot of confidence in his game.  He’s already signed on to play for the Lahti Pelicans of Finland’s Sm-Liiga next season.

Talent Analysis:  Annunen is another big bodied goaltender who uses his big frame effectively to give shooters little to shoot at.  He moves reasonably well for his size and his rebound control is excellent.  The Kempele, Finland-native is very consistent in how he squares up to shooters and is efficient and economical in his movement in the crease.  Scouts do note he needs to recover quicker on scrambles around the net and at times his glove hand is a bit suspect.  Annunen keeps things simple when playing the puck but he sees shots well through traffic and demonstrates a good understanding of how to read the play and anticipate what will happen next.  A solid goaltender prospect.

Bottom Line:  A no-frills goaltender who has to improve certain parts of his game, but the physical tools are there to be a quality goaltending prospect.

Talent Analysis:  While not as big as the previously mentioned goaltending prospects, Rodrigue is the #1 ranked goalie by both NHL Central Scouting and International Scouting Services.  He is a remarkably quick and fundamentally sound goaltender.  His recovery time is tremendous and does a great job of reading the play and anticipating where he needs to be.  The Chicoutimi, Quebec-native has terrific rebound control and does a good job of limiting windows for shooters to aim for although because of his average size he does have a natural disadvantage at denying the top part of the net.  His glove hand is terrific, but when playing pucks he keeps it simple.  Post-to-post he is the quickest goaltender available in this draft.  He is also very slight, so he’ll have to work to fill out is modest frame.

Bottom Line:  A goaltending prospect with NHL starter potential, but may be limited by the fact he’s not prototypical NHL goalie size.  His quickness, intelligence and poise is arguably the best in this draft class.

Talent Analysis:  Like Rodrigue he’s slightly undersized by today’s NHL goaltending standards but he makes up for it with good quickness and solid positioning.  Dostal likes to challenge shooters and cuts down the angle very effectively but at times he can be almost too aggressive and take himself out of position.  An intangible he seems to possess he seems to play even better when its a big game as he demonstrated at the U18 World’s and in the playoffs for HC Kometa this spring.  He has great recovery and rebound control and directs pucks to the corners consistently where they’re far less likely to cause trouble.  He is not an exceptional puck handler, and he will need to add strength to his frame.  Dostal is calm and tracks pucks well through traffic.

Bottom Line:  He may not be the most gifted goaltending prospect in terms of size or quickness but he get the job done by being smart and anticipating the play well.  His size does make him a bit more risky of a pick.

What goaltending prospect excites you the most?  Let us know on Twitter @CreaseAndAssist or in the comment section below!