Cubs stun Phillies with walk-off grand slam; What should Kapler have done with Dominguez? 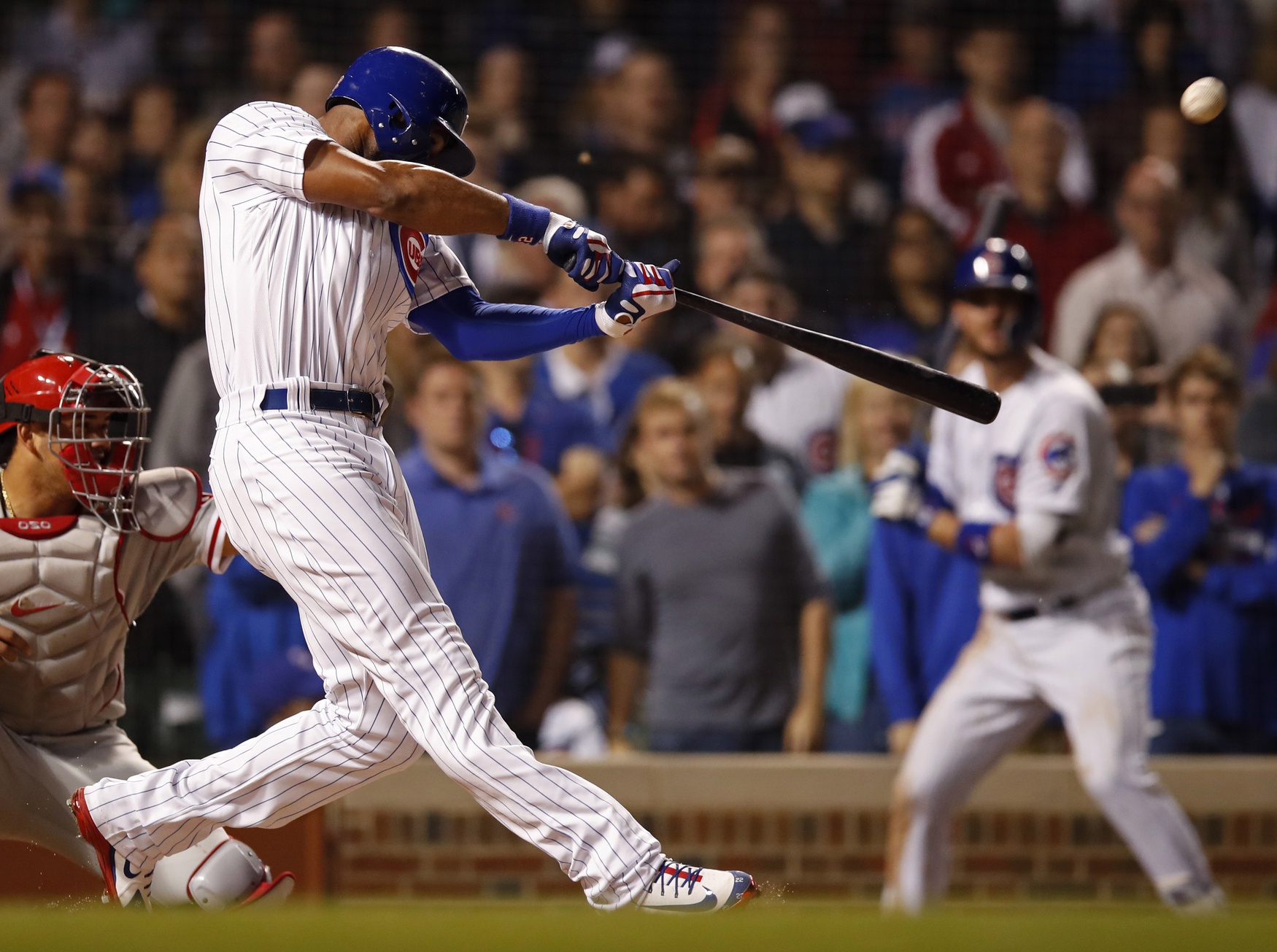 Cubs stun Phillies with walk-off grand slam; What should Kapler have done with Dominguez?

Well, that was a tough one.

The Phillies were one pitch away from claiming a confidence-boosting series victory on the road against the Cubs last night. It would have been a great win to have considering Aaron Nola didn’t have one of his better outings, the Phillies rallied from a 3-0 deficit and later broke a tie ballgame in the ninth inning with the first career home run by Dylan Cozens on the same day the Braves suffered a series loss in San Diego. Oh, what could have been.

The Phillies lost to the Cubs Wednesday night when Jason Heyward launched a ball into the bleachers in Wrigley Field for a walk-off grand slam on a 2-2 pitch with two outs against Adam Morgan. That’s how close the Phillies were to a second straight win against the Cubs, a team the Phillies are currently trailing in the NL Wild Card standings while also focusing on a tight NL East race.

After a loss like that, there is no better medicine than soaking in the anger raging from postgame analyst Ricky Bottalico on the post-game show on NBC Sports Philadelphia. He was livid with Morgan and catcher Jorge Alfaro.

He had A LOT to say about Adam Morgan’s inability to close this one. pic.twitter.com/BprGlLdtUP

I think Bottalico is spot on with his criticism of Morgan. And I’ll even give the criticism of Alfaro some credit here, although I’m a little more willing to give Alfaro a break considering he is still young and he actually helped prevent a run from scoring earlier. But why was Morgan thrown into this situation in the ninth inning in the first place?

Gabe Kapler has been under fire for how he managed the game last night in the late innings, and it is fair to go back and wonder how things could have been managed differently.

What should have been done with Dominguez?

Firery reliever Seranthony Dominguez entered the game in the eighth inning, replacing Tommy Hunter after Hunter recorded a 1-2-3 inning in the seventh. Staying true to form, Dominguez dazzled with his own 1-2-3 inning against Kris Bryant, Anthony Rizzo, and Wilson Contreras with three flyball outs on a total of 14 pitches. Keep in mind that Kapler also used Dominguez the previous night to record the final three outs of a 5-1 game, and Dominguez threw 12 pitches.

Everything looked fine at that point for the bullpen. Then, in the ninth inning, the Phillies put together a long inning with Dylan Cozens hitting his first career home run to give the Phillies a two-run lead off Cubs reliever Brandon Morrow.

After the home run, Alfaro was hit by a pitch two batters later, bringing up the pitcher’s spot. What do you do? Send a pinch hitter to the plate, right?

One of the problems was the Phillies were running low on bench players already. Nick Williams had to be replaced midway through the game by Cozens due to a possible wrist injury. J.P. Crawford had already entered the game after a pinch-hit appearance, replacing Maikel Franco at third. In a close game, any manager will be reluctant to use a backup catcher in case they need it later (and Andrew Knapp hasn’t exactly been knocking the leather off the ball either). So Kapler made the decision to send Dominguez up to the plate for his first career at-bat at any level.

For a brief moment, that seemed to work, as Dominguez worked a full count and drew a walk off Morrow, who was promptly pulled in favor of Cory Mazzoni (who picked up the remaining two outs to strand two more base runners for the Phillies). Dominguez then headed back out to the mound for the bottom of the ninth.

And Dominguez promptly walks the first batter he faces in the 9th on four pitches. First walk he's issued this season. https://t.co/YexCAemeYH

Dominguez may have suffered a fate some pitchers can relate by going back out for another inning of work after an extended inning. I’m not sure how much pitching the night before mattered, but a four-pitch walk to start the ninth inning when Dominguez has been so automatic this season should have been a red flag. Pulling Dominguez when Kapler did was the right call, but the even better call may have been to just start the ninth inning with a fresh arm. Even though Dominguez has been so good, the Phillies may have been better served going with some conventional late-inning management there.

But why Morgan? Well…

Only the 2nd homer Jason Heyward has hit off a lefty in the last 2 seasons and its a walk-off grand slam.

That's just a brutal loss for the Phillies. Nearly won on a night when Aaron Nola was less than his best. Still a night Dylan Cozens will remember.

Phillies fans have so little patience for Adam Morgan.

Not saying he's the greatest lefty reliever to put on a pair of cleats, but he did have a 2.35 ERA in 23 appearances this season. He did hold lefties to .193 last season. Hadn't allowed an XBH to a lefty in 2018 'til tonight

Perhaps it was just a stroke of bad luck for Morgan and the Phillies. Or maybe the game could have played out differently with a different reliever or two. Of all nights to let a game like this slip through the fingers, this was a brutal loss.

It is still early June and is plenty of baseball to play, but with the division race shaping up the way it is, letting a win slip away like this could be critical down the line. The Phillies begin today sitting 2.5 games out of first place (the Nationals and Braves are tied for first), when a win would have pulled them to within 1.5 games. The loss also dropped the Phillies 2.5 games behind in the NL Wild Card, trailing the Cubs and the Nationals/Braves and are now tied with the Cardinals, Now, the Phillies are pressured into ending this series with a win to return home with a little bit of confidence.

If you are still mad about last night’s game, I hear you. You should be. It was not a pleasant end to a night that could have turned out so much better. But the Phillies have a short turnaround to get over it. The series in Wrigley Field wraps up this afternoon and the Phillies still have a chance to end this road trip on a winning note and come home with a series split against the Dodgers and a series victory over the Cubs (we’ll pretend the San Francisco series never happened). Nick Pivetta on the mound for the Phillies facing Tyler Chatwood for the Cubs. He could really use a solid outing to get himself back on track after a rough May.

So find some way to cool off a little bit and get ready for some afternoon baseball.

If you are still fuming over last night's #Phillies game or the fact the #Sixers still haven't fired Bryan Colangelo, listening to this classic tune from the Donkey Kong Country soundtrack should calm you down this morning. https://t.co/MGxdmOQVWx