Why The Hell Is Jose Reyes Still On The Mets? 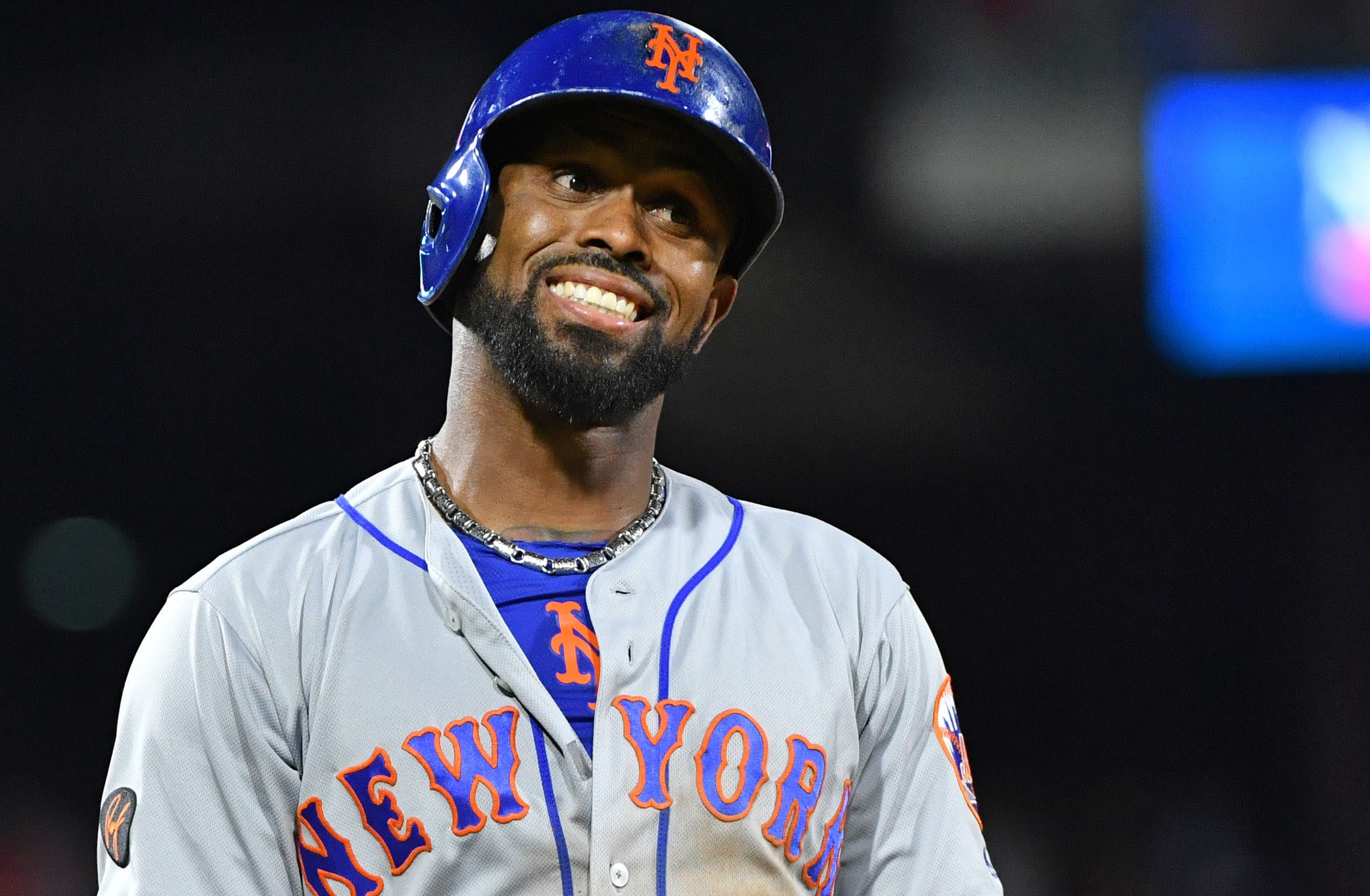 Why The Hell Is Jose Reyes Still On The Mets?

I had planned to write this after the inevitable demotion of Luis Guillorme to make room for whichever Met was coming off the disabled list. With the return of Todd Frazier and Anthony Swarzak, I thought that would be time. But when it was Gerson Bautista and Buddy Baumann that paid the price, I shelved this for a couple of days. But I found my reason to revive it. We’ll get to that. But first, I want to put my biases and history on full display …

I was a huge fan of Jose Reyes when he came up, and throughout his first go ’round with the Mets. Still think that at his best, he’s the most unique ballplayer I’ve ever seen. I still fume when I think about Larry Andersen saying that somebody should put one in his ear as he was rounding the bases after a home run with his finger in the air. Still. To this day. I still think the made up controversy about him bunting on the last day of the season to help him win a batting title was much ado about absolutely nothing, and I’ll fight anybody on that point.

When he left, I understood. Miami offered him a boatload of money which would have blown the Mets away even if they were interested, which it seemed they never were. Okay. Missed him as he went to Toronto, where I really thought he and R.A. Dickey were going to head to the World Series together. Then he was traded to Colorado and it became apparent that his skills were diminishing, and it was apparent that Sandy Alderson was right not to sink a ton of money into him during the winter of 2012. I was sad, because a piece of the Mets last great window was slowly fading into oblivion. Now I wish it had.

Then came Halloween of 2014, when Reyes was arrested for domestic violence. The incident never went to trial, as his wife refused to cooperate as a witness. Because of that incident, the Rockies demoted him to the minors for a “rehab assignment”. then released him outright while on the hook for another $48 million. The Mets then became the only option for Reyes considering his history with the team combined with the domestic violence history. The Mets, no doubt attracted to the chance to sell nostalgia while only paying minimum price, signed Reyes.

People were happy about Reyes coming back. But for me, I couldn’t get past the fact that the only reason that Reyes was wearing a Mets uniform again was because he committed a violent act against his wife. I still can’t get past it. So to me, he was just another player. Not being in jail, he was entitled to a chance to make a living. But as far as I was concerned, he wasn’t entitled to the same love from me that he got from 2003-2014. That Jose Reyes was gone forever. This Jose Reyes was just another player on the roster for me, to be judged with a much harsher eye, along with a cringe or two when the Citi Field sound system would play the “Jose, Jose Jose Jose” song, which felt over the top for me. Is this bias fair? That’s for you to decide. But it’s my bias and I’m comfortable with it.

In an alternate world where the DV charge never happens, he probably remains a Colorado Rockie in 2016 and 2017, or perhaps he’s traded to another interested organization willing to pay the freight on part of that hefty salary. And maybe he does sign back here in New York for 2018 for one last go ’round with a much more sympathetic backdrop. He probably still stinks, and the inevitable day still waits by the door searching for the perfect opportunity to knock. In this universe, maybe I’m not writing this. Maybe my nostalgia for the Jose Reyes I loved kicks in, and I wait until the final day to opine on it. I would hope that I would have still recognized the charade of having a “name” here with diminished skills just to sell tickets. Hell, I thought the same way about bringing Bartolo back in 2017, that the Mets should move forward and not back, so maybe I would have. But with as much as Reyes meant to the Mets from ’03-’11, my stance is probably at least a little bit softer. But we can only work off the path we’re on, and this is my path. So everything I’m about to say, I say from my path … my pulpit … and my recesses.

So now with all that said, I can tell you with a clear conscience that there’s no way in hell that Jose Reyes should be on this team. You know the numbers. You know the playing time. You saw that Guillorme was brought up to pinch hit instead of Reyes on Tuesday, which should have spelled the end of Reyes’ Mets career right after the game. But you knew it wouldn’t after the roster gymnastics that the Mets went through just to keep Reyes. Consider:

Are any of these players special? Probably not … they’re 25th men. And you’re probably saying that keeping Reyes as the 25th man on the roster over these three isn’t the biggest deal in the world. But Evans hit .303 in limited action last season … in half the PA’s that Reyes has this season. Is that small incremental drop in production worth the perceived bump that the Mets think they’re getting at the gate from Reyes? Wouldn’t it have been worth it to find out while taking advantage of the added flexibility you get from Evans? It shows you what the Mets value … name brand over production. And if they’re willing to do this with any spot on their roster, there’s no telling what they would do for the really important ones.

But okay, all that aside, we get to the point of why I’m choosing today to write all of this. Here’s Mike Puma’s tweet from yesterday:

Mets officials have discussed releasing Jose Reyes, but are conflicted given Reyes' roots in the organization. Mets want Reyes receiving a proper sendoff.

A proper sendoff? What? A retirement tour? Number 7 hanging on the wall? Announcing he’ll be the manager of the Yankees in 1980??? You’re giving him $2 Million to be Amed Rosario’s mentor! Did you see Rosario’s at bat in the seventh inning with the bases loaded yesterday? The one where Dylan Bundy walked Jose Bautista to load the bases and give the Mets their best chance to score, and Rosario takes two home run cuts at pitches down the middle, misses one and fouls off the other, then waves at a dipsy-doo slurve-up to end the inning? Did you see that horrible at-bat that was straight from the Jose Reyes school of situational hitting? You gave Jose Reyes two million dollars to teach Rosario how to do that!!! Two million dollars to teach others how to screw up? Sign me up for that sendoff.

These Mets officials are hysterical, sneaking information to the press about what they’re going to do, when every other organization in the history of organized baseball would have let Reyes go long ago. Maybe I don’t have this all figured out, but I’m pretty sure I do. You see, here’s what’s going to happen: First we’ll see a tweet from Mike Puma that’ll go something like:

“Yoenis Cespedes is due to come off the disabled list. Mets sources say that Jose Reyes’ roster spot could be the one that Cespedes takes.”

“Mets people tell me that Reyes will be designated for assignment to make room for Cespedes.”

At this point, the Mets will be searching for a date to make the transaction, all the while searching for that “proper sendoff.” Let’s see, Mets have the Yankees here, all the tickets sold for that. Then they go on the road, that’s no good … then the Dodgers come to Citi Field but everybody is already coming for Amed Rosario shirts, Home Run Apple figurines, and cap day on Sunday. But look, the Pirates are in Monday, Tuesday, and Wednesday of that week.

“Cespedes due to come off the DL on Tuesday the 26th. I’m told that Reyes will be designated for assignment after the game on the 25th. I’m hearing that Reyes will start the game, then will be replaced by Frazier on the field so Reyes can walk off to a standing ovation.”

Voila!!! Walk up sales for a non-descript Monday game against the Pirates which is now unofficially “Jose Reyes Day”. Jose gets his “proper sendoff”, and the Mets get an extra $20,000 to entice an under-slot sidearmer in the 2019 Draft. Everybody wins, everybody is manipulated in the name of winning.

Maybe I’m throwing out a wild conspiracy theory, but you’re not rejecting it out of hand, are you? Perhaps I’m wrong. Perhaps I don’t have the names right. But if this is what happens, I want every beat writer to link to this article and give me credit for having figured this scam out. This isn’t even about Jose Reyes anymore as it’s about our owners caring more about getting you in the ballpark than they do about putting together a competitive ball club. Sure, they’ll put together a club that fits their idea of a sustainable model (which is another huge clue as to how the Mets feel about putting together a World Series winner), one that may compete for a wild card spot but if they don’t, eh. They’ll draw about 2.5 million fans just like they almost did during a terrible year and that’s good enough for the owners. As long as they bring in enough to cover for a terrible contract here and there, that’s fine. Then when an opportunity to make some extra dough to give Jose Reyes a “proper sendoff”, they’ll take it.

If I’m right about all this, you should all … every single one of you … ask yourselves this: Do I want more? Do I want to go back year after year and just support a team no matter who is wearing the uniforms because I’m a fan and that’s what fans do? Or do I want more from my three hours than just milk bar cookies and maybe a David Wright sighting in the dugout? Because if that’s all you want, that’s fine. But the rest of us want more. The rest of us deserve better. We all deserve better. We deserve the assumption that we’re too smart to fall for nostalgia and “low-risk high-reward” every single season. Right now, I don’t think we’re getting it. And to me, the Puma tweet is the latest smoking gun.