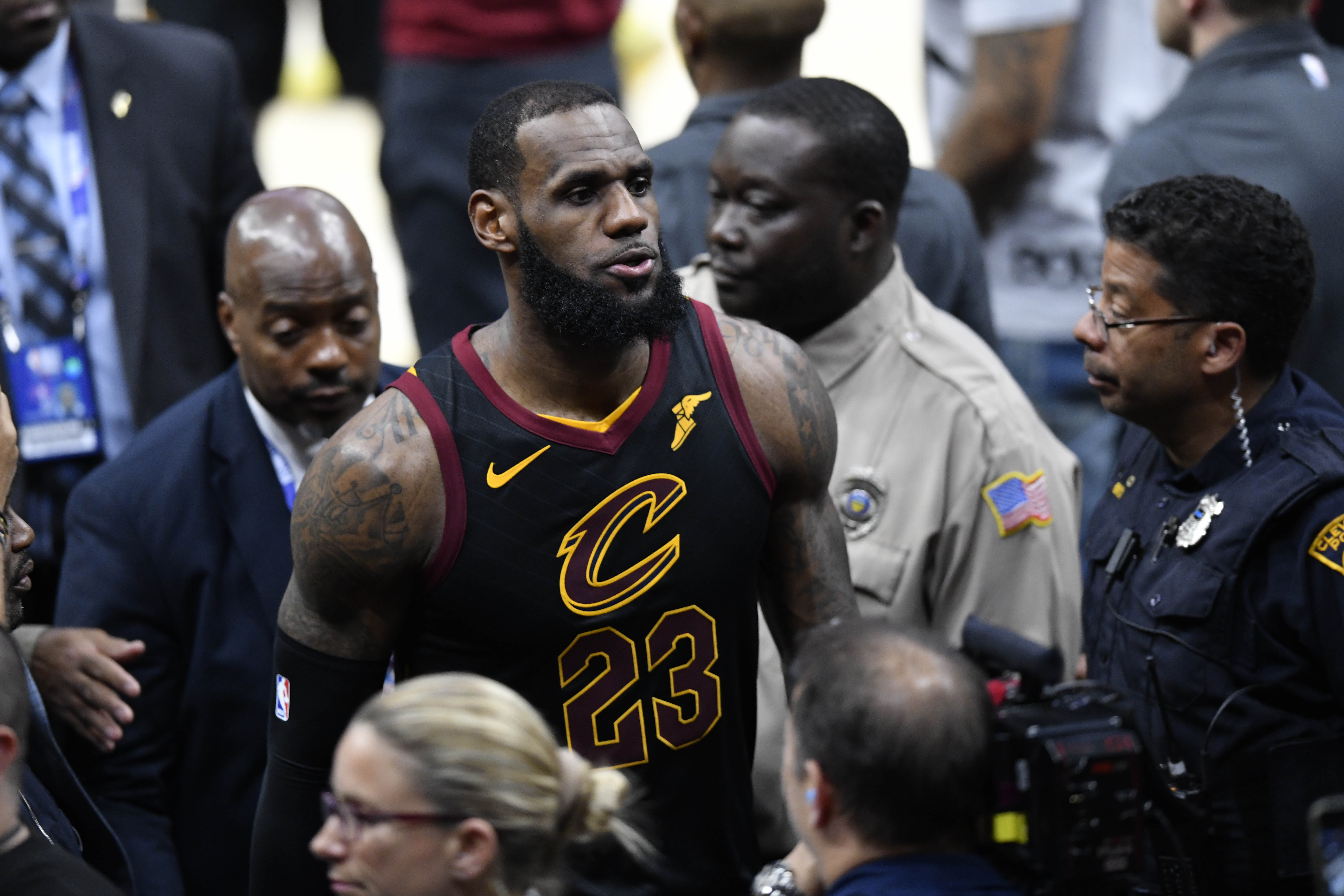 LeBron James likely played his final minutes as a member of the Cavs in Game 4 of the NBA Finals on Friday night, with the possibility of him opting out of his current deal and pursuing free agency looking like the most likely move for him going forward.

James played 41 minutes in the elimination game at Quicken Loans Arena, scoring only 23 points on 7-of-13 shooting. It wasn’t his best performance by any stretch, as he appeared to be tired, and didn’t look like his normal self. Getting hit in the eye (watch here) — again, mind you — early in the game sure didn’t help matters.

The three-time MVP Award winner didn’t bother to stick around on the court after the 108-85 loss, either, as he was seen walking off the court without shaking hands to congratulate the Warriors players on their title win.

LeBron James walked off the court. Did not shake hands postgame. Jeff Van Gundy points out he congratulated guys as he exited game.

James failing to shake hands with the Warriors produced some strong takes on the Twitterverse, as fans took to social media to rip LBJ.

LeBron James exits the court alone, does not meet @warriors with his teammates. I don’t agree with the broadcaster: “And I don’t think a sportsman should be dictated by if you shake hands or not. To me it’s by how you conduct your business and compete on the floor.” Sore loser.

Lebron James has been doing so much in regards to speaking up about so many important issues. Poor sportsmanship tonight leaving the court without congratulating the Warriors players. The NBA needs to follow the NHL’s lead, no matter what the players shake hands after the series.

Wow did LeBron James not shake hands with the winning team. What a poor sport.

@KingJames you are such a sore loser! Can't even shake hands and congrats #GSW. How does it feel to get destroyed on your own court?? P.S. it never happen to Jordan!!!! Fake GOAT!!

#Warriors #cavs just sad to see the team of the @cavs go hug and shake hands with the @warriors EXCEPT @KingJames who ran to the locker room. Congrats to the true best team #GoldenStateWarriors shaking my head at how unprofessional James was tonight pic.twitter.com/OCkSgnB1Qj

I disagree with about 98% of the criticism that LeBron James receives but at least stay on the court and shake hands at the end of the game. Leave the court with your team

Warriors head coach Steve Kerr sure didn’t seem to think any less of James after his poor performance in the game, having some extremely high praise for LBJ when asked to compare him to Michael Jordan and weigh in on the GOAT debate.

And sure, the moment in question was a bit overblown, but James could’ve at least stuck around for a few brief moments before making his way to the locker room, especially since he received a great ovation (watch here) from Cavs fans upon exiting the game with roughly four minutes remaining.