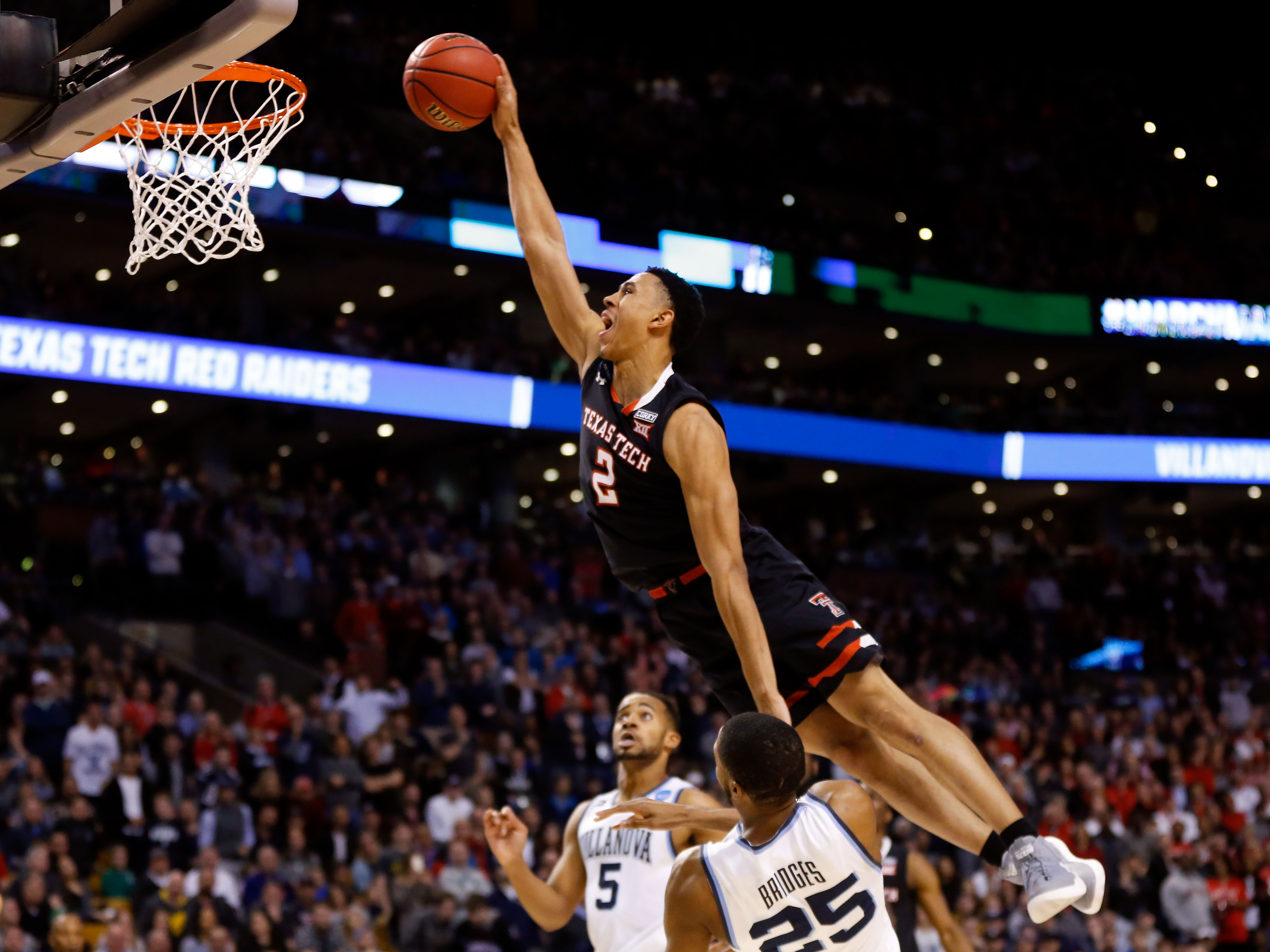 The Washington Wizards were back to hosting pre-draft workouts at Capital One Arena after a two-week hiatus of intra and international scouting on the West Coast and in Europe. For the first time, the Wizards had multiple potential first-round prospects in the building during the same session. Zhaire Smith, Troy Brown Jr., and Elie Okobo are all projected first-round draft picks for the upcoming NBA draft. St. Bonaventure’s Jaylen Adams, Seton Hall’s Angel Delgado, and Wyoming’s Alan Herndon filled out the six-man pre-draft workout, but will likely go undrafted.

Rarely on the same team in these workout sessions, Smith and Brown have guarded each other numerous times in now their third pre-draft workout with one another. Both are impressive players that could be worthy of the No. 15 overall pick on June 21st in New York.

After more playing time than he initially expected as a freshman for the Red Raiders, Smith will enter the NBA draft as a one-and-done player known for his athleticism. Smith averaged 11.3 points and 5.0 rebounds in 28.4 minutes per game over 37 games in his only season of college basketball. He shot 45 percent from beyond the arc, but only had 40 attempts from deep. Washington was Smith’s fourth pre-draft workout spot with Philadelphia and Phoenix on deck.

On the workout itself:

On what he wants to show teams that they might not already know:

“My ability to shoot and handle the ball, pick and roll situations. … I think I’m doing a pretty good job showcasing that.”

On matching up with Brown for the third time:

“Just knowing him, knowing his tendencies. I know he a hard worker. We are all pretty cool so we push each other, we encourage each other. It’s just fun going against him, we’re really competitive, too.”

On how he can fit in with the Wizards and how he differentiates himself:

“I play hard and my defense. … Doing something that they [other wings] can’t do that others don’t see that don’t show up on the stat sheet. Playing hard, being vocal, and defending really because anybody can score.”

On showcasing his athleticism:

“I just always go with my natural habitat and that’s leaping, driving. Just whatever the defense gives me. If they on me and I feel like I can go by them, I’ll probably try to go by them 10 times until they stop it. But if they try to take it away, then I can show that I can shoot.”

Another one-and-done player, Brown can play three positions in point guard, shooting guard, and small forward with the quarterbacking of the offense portion stemming from his high school days. In his lone season in college, Brown averaged 11.3 points, 6.2 rebounds, and 3.2 assists in 31.2 minutes per game. He struggled from beyond the arc with a 29.1 percent efficiency (32-for-110), but believes he has done enough since the end of the season to prove his improved shot. The Wizards were Brown’s eighth pre-draft workout and he has four more to go over the stretch run including Milwaukee and Portland.

On how the session went:

“The workout went very good, it was really competitive. We had a lot of guys out there that were high IQ players and played really hard so I felt like it was a good workout. I felt like I did good individually just showcasing my talents: playing basketball and showing my IQ and my playmaking.”

On matching up with Smith for the third time:

“It’s fun. We enjoy playing against each other. We’re both competitors and seeing each other so much, it brings the best out of us. Just playing hard, making sure we’re always on our toes. We know one another is gonna come at each other and compete. It’s a fun opportunity honestly.”

On how he differentiates himself:

“My playmaking ability is my first thing. Being my size and being able to be a playmaker and make plays for my teammates, being able to score the basketball well. Just being that versatile, all-around player really helps me a lot because I can kind of squeeze in anywhere as a player. Defensively, offensively, passing so there is a lot of different stuff that I feel like I bring to the table.”

On improving his shot:

“It’s been a lot of repetition. My mechanics, I didn’t feel like were terrible. It was more my shot selection this year. Some of the shots I was taking weren’t very good. It’s just been repetition, making sure I’m in the gym putting up shots and I feel like I’ve done a really good job showcasing that and I feel like a lot of teams are impressed with my shooting right now.”

On his confidence to talk to Ernie Grunfeld shirtless at the end of a workout:

“I would just say that comes from me putting in the work and me knowing who I am as a person. If you know who you are and you know you prepared for these situations, you’ve given everything you’ve had, then there’s no reason for you not to be confident. I feel like it’s the people who don’t give their all and try to take shortcuts around the process that don’t feel comfortable.”

On if he would rather play on or off ball.

“I feel comfortable with the ball in my hands. Just being a big guard, I feel like I make the ball move a lot, making plays for others, being a big guard I can see over a lot of people and create spacing. Off the ball works, too, either way.”

On feedback from teams during pre-draft process:

“I feel like I’ve been proving a lot of stuff wrong throughout these workouts.”

On what position he views himself:

“Honestly, it doesn’t really matter. I’m a basketball player. I’m just looking for my opportunity to get in whether it’s the three, the two, or the one. I’m just trying to make sure I can be a player in the NBA, be a versatile player, do whatever a team needs in order to get the W.”

On the other wings in this year’s draft:

On why he is a player on the rise:

“Going into the workouts, I don’t think people expected a lot out of me just because of the season I had. I just feel like when I came in here a lot of people had lower expectations from me as a player. I know who I am as a player and what I can do on the court, so when I’m out there comfortable and I’m scoring, passing, playing defense and stuff like that, teams are kind of like amazed by it. But for me, it’s just been something I’ve been doing ever since high school.”