Houston Astros: Dallas Keuchel must get back to his bread and butter 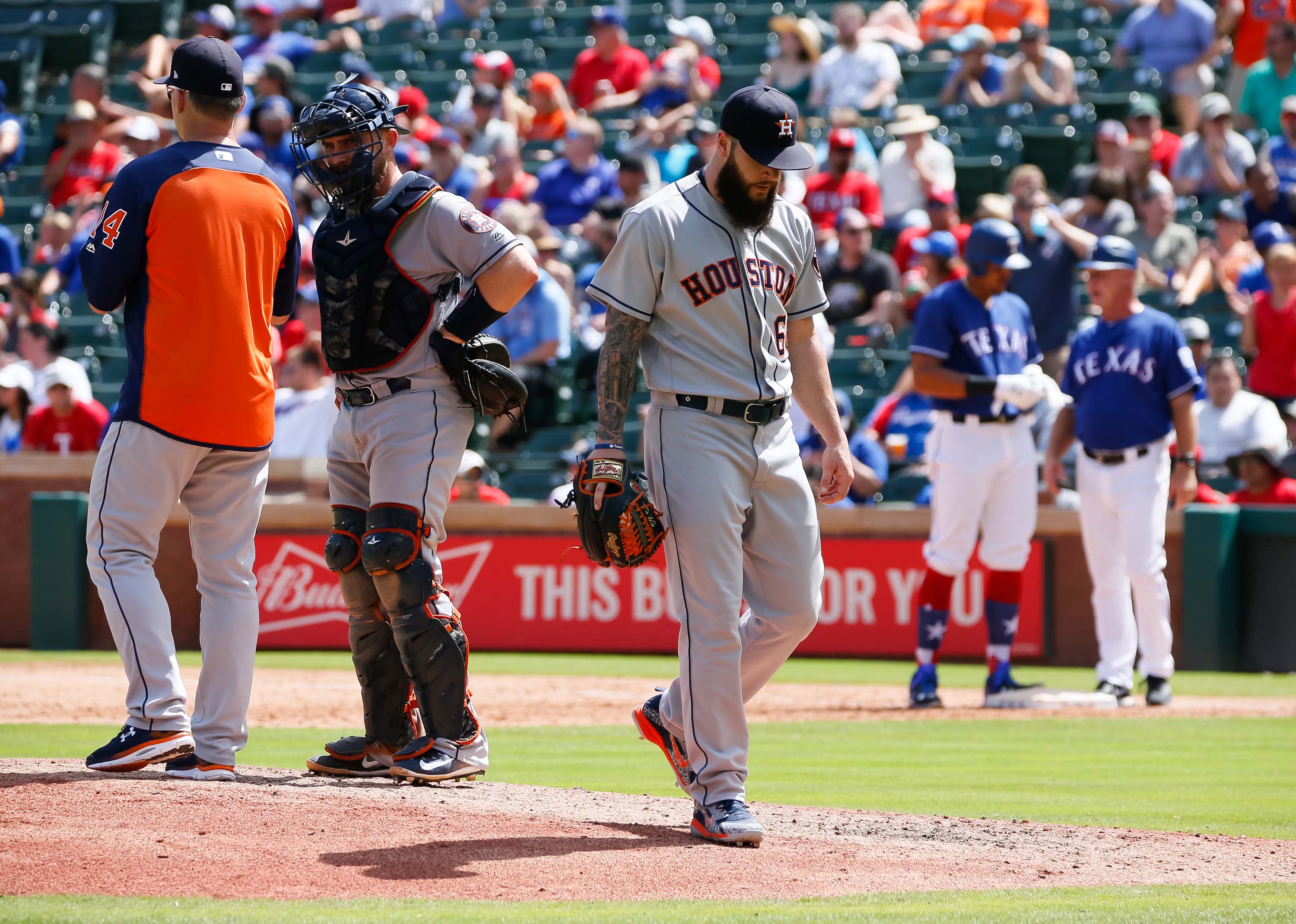 Houston Astros: Dallas Keuchel must get back to his bread and butter

Prior to the 2018 MLB season, it appeared as though the Houston Astros had assembled baseball’s best rotation. Now that we’re more than two months in, that thought is still true, and by a rather wide margin.

Their 2.90 rotation ERA and 28.3% strikeout rate are both at the top of the league, while the closest staff to Houston’s cumulative 9.9 fWAR is the Washington Nationals at 8.4. So, yea, the Astros are basically running a dominant arm out to the mound on a nightly basis.

One outlier amongst this group so far has been the 2015 American League Cy Young winner (and impending free agent) Dallas Keuchel. The southpaw’s 6.0% walk rate is the lowest when comparing it to what Justin Verlander, Charlie Morton, Lance McCullers Jr., and Gerrit Cole have done, but that’s about it. His 18.1% strikeout rate, 4.45 ERA, and 0.9 fWAR are all the worst.

Then again, Keuchel’s 3.89 SIERA suggests he’s run into a bit of tough luck, which could be true. However, there is a stark difference in one area of his game that’s typically been a key to success for him: his ability to generate ground balls.

It’s not as if his current 54.4% ground-ball rate is bad — after all, it’s one of the top-five rates among qualified starters this season. The problem is what he’s done is a sharp decrease from 2017 — Keuchel was the proud owner of a career-high 66.8% ground-ball rate in 145.2 innings. If he qualified for the ERA title, that would’ve led the league by more than four percentage points.

We already mentioned Kuechel’s current ground-ball rate, but it’s also been accompanied by a 25.0% soft-hit rate and 30.0% hard-hit rate. A main cause seems to be his inability to keep the ball low, as illustrated by the below tweet (the left picture represents 2017, while the right picture represents 2018).

I think this should answer it. On the left is the strikezone plot of Keuchel's dominance against the Yankees last October. On the right is yesterday's game vs Rangers.

He's not hovering the bottom of the zone like he used to = fewer chases. pic.twitter.com/KU0yNAaohS

According to Pitch Info plate discipline stats on FanGraphs, the southpaw’s chase rate is currently sitting at 30.6% after settling in at 34.5% last year, which was a career high.

Although he’s kept his walk rate on par with his career norms, the effectiveness of his pitches overall have taken a dive from a value perspective (outside of the cutter). For someone that’s not a huge swing-and-miss hurler and relies heavily on controlling both the strike zone and his opponent’s quality of contact, the crispness of his arsenal is crucial. When those secondary pitches aren’t working well, it’s hard for his four-seam fastball to be effective. His current chase rate for that pitch is 23.4% after a career-high 38.8% rate in 2017.

Keuchel has some lofty in-rotation competition to deal with, especially since he’s different from the rest of his fellow hurlers. Saying he’s performed the worst of this group is saying more about how elevated everyone else’s performance has been, not how bad he’s been.

However, if the Scott Boras client is hoping to net a significant multi-year contract prior upon entering his age-31 season, he’ll need to amp his performance up quite a bit before it’s too late.