Your Morning Dump... Where the Celtics tried to pry Kawhi Leonard away from the Spurs 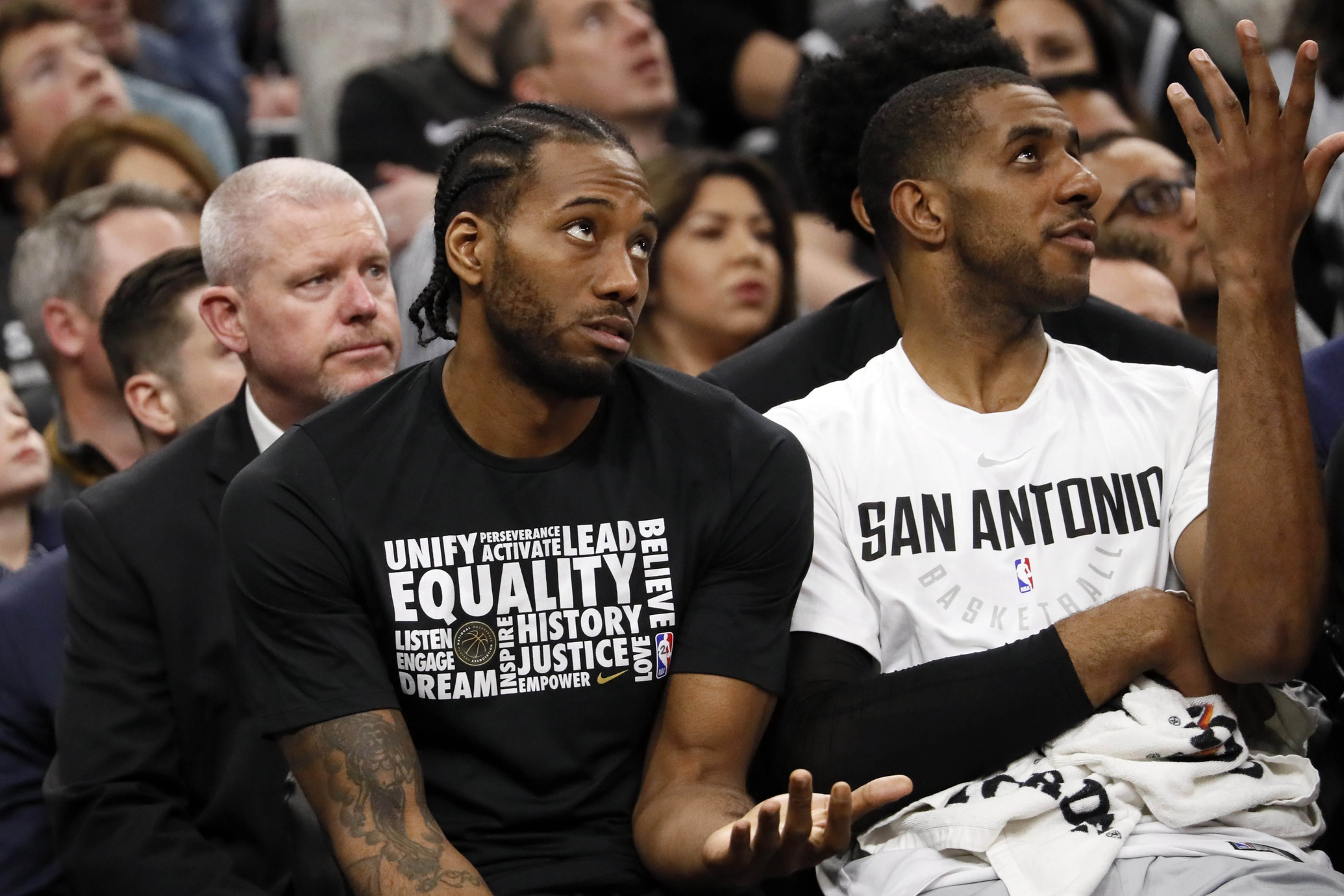 Your Morning Dump... Where the Celtics tried to pry Kawhi Leonard away from the Spurs

The Boston Celtics made a trade offer to San Antonio before the February deadline, but the Spurs turned it down — and never made a counterproposal, league sources said. San Antonio wasn’t willing to discuss deals for Leonard in February. So far this spring, the Spurs remain resistant to trades.

Only four months since the trade deadline, the Celtics find themselves in a different organizational space. GM Danny Ainge can stay on course with forwards Jayson Tatum and Jaylen Brown on rookie contracts, sparing Boston the financial pressure of re-signing two maximum-contract players with injury histories — Kyrie Irving and Leonard — in 2019.

Boston could still consider Leonard on a distressed, discounted deal — the way it secured Irving last summer — but that has become a far less likely scenario than keeping its young core.

ESPN: Can the relationship between Kawhi Leonard and the Spurs be repaired?

There is an interesting layer to this.

San Antonio never makes a counter-proposal. Is it because they’re really that stubborn about trading Leonard? Is it because they want to show Leonard how committed they are to keeping him? (Is it both?) I view this as a similar situation to Russell Westbrook taking the super-max in OKC – the Thunder will always be in the conversation in the Western Conference so long as they retain Westbrook, and the Spurs are in the same boat with Leonard. Sometimes, you need to make sacrifices to get the player to commit. The Thunder gave up assets for what might be one year of Paul George and even more assets for Carmelo Anthony’s albatross contract. The Spurs are only overpaying one player (Pau Gasol), but could be taking a risk in shooting down trade offers without attempting to negotiate in the process.

Knowing the Celtics, the initial offer was probably pretty low. Still, you’d think the Spurs would feel some obligation to figure out the trade market for Leonard in the event they can’t strike a deal. That kind of due diligence is the least of what you’d expect of an organization like the Spurs.

Between February and now, Jayson Tatum and Jaylen Brown played some outstanding basketball in the playoffs. The temptation to package either of them is certainly lower since the trade deadline and probably renders them untouchable in trade talks unless the deal is too good to pass up. Still, it seems like an error on the Spurs’ end to not have a backup plan to extending Leonard.

Celtics All-Star point guard Kyrie Irving said Tuesday that a contract extension this summer doesn’t make sense for him and that while he’s already bracing for the daily questions about his future, his sole focus is on getting healthy for next season and helping Boston take another step toward title contention.

Irving is eligible for an extension this summer but, even coming off another knee surgery that sidelined him for Boston’s improbable run to the cusp of the Finals, was adamant that he’ll wait for the summer of 2019 to examine his future.

Irving is eligible for a four-year, $107 million extension, but that would be $80 million less than what he could earn if he waits until the summer of 2019 and re-signs with Boston after opting out of the final year of his current pact.

For everybody sounding the alarms because they think Kyrie Irving wants out of Boston, this excerpt is for you. Irving’s answers to questions about his future were twisted and contorted in ways I’ve never seen before, making it understandably difficult for some to understand what is going on. Irving doesn’t want to leave $80 million on the table, and he’d probably be willing to walk away to get it, but that doesn’t mean he would rather be somewhere else.

Just spoke to Kyrie Irving (obviously). Asked if he would *like* to be a Celtic long-term. Would not say yes definitively. Asked if he likes being one. Said he loves it. Also laughed at a couple jokes of mine. He seems to like me

Kyrie on his future: “my hope is we can limit it to maybe one question a day about what I’m doing next year.”

Irving’s non-committal answers to questions about his long-term future are nothing to fret about. Irving has been a Celtic for nearly a year now, and his answers to questions have always been word salads. You know this and I know this. We can go back to the flat Earth questions, his appearance on First Take, or Milwaukee’s old school court for awkward reminders or what comes out of Irving’s mouth.

I love the guy. I really do. We’ve been through this before: Kyrie gives weird answers and it’s really not the worst thing in the world.

All I care about is that Irving, while injured, was grinning ear-to-ear and applauding on the sideline while the guys who picked up the slack came within one game of an NBA Finals appearance. Three months of his support should not get drowned out by his cryptic way of speaking, and yet here we are.

Kyrie “I’m truly grateful to be able to speak with management and the coaching staff….we have an open Dialogue about the direction we’re going in.”

Finally… a prescient conversation about Danny Ainge from the 80s

From an old forum post (here) shared on the Boston Celtics subreddit (here):

I hate to stir up a topic that has been peacefully dormant for some time now, but I saw some statistics on Danny Ainge which might interest people.

He continues to lead all NBA starting guards with a .541 field-goal percentage (through Feb. 3). This figure is particularly meaningful in light of his shot range, which consists almost entirely of 18-20 footers.

Ainge’s per-game averages look like this: 11.5 points, 5.6 assists, 1.5 steals and 3.3 rebounds. I do not have turnover statistics in front of me, but as of a month or so ago, Ainge’s assist-turnover ratio (a commonly used statistic for point guards) was among the league’s best. He takes very good care of the ball.

I am not calling Ainge an all-star, just a very solid player a lot of teams would love to have. He has a tendency to heat up early in the game, quite often while Bird, McHale and Parish are still trying to get the ol’ engines started. I can’t count the number of times Ainge has 10 points in the first quarter, all from outside, and Celts lead by two or three while Bird is 1 for 5 or something. It happens a lot.

I think Danny is very good guard. You’ve highlighted his good stats, most of them offensive, but I particularly like him for his defensive play.  He is adept at team defense and doubling down on the Jabbars and the Malones.

Surprisingly, he’ll come up with a few defensive rebounds now and then.

Don’t get me wrong … he’s is certainly not a Maurice Cheeks or a Dennis Johnson (my personal favorites in the East).  But like many of the Celtics, he is that much better a player for belonging to the Celtics than he would be on a lesser team.

Last sentence bolded for emphasis. Like, a lot of emphasis.

This conversation almost perfectly describes what Danny Ainge looks for in players as he builds the current iteration of the Celtics – guys who can spark the offense, take care of the ball, and play some solid defense. I’m not sure if Ainge building a franchise in his own image is incredibly intelligent, unnervingly egotistical, or a healthy mix of both, but I love the direction of it. It also sheds some light on the Brad Stevens hire, who is able to do with this squad what the 80s Celtics were able to do with Ainge.

Time is a flat circle. And, depending on what Instagram pages you follow, so is the Earth.