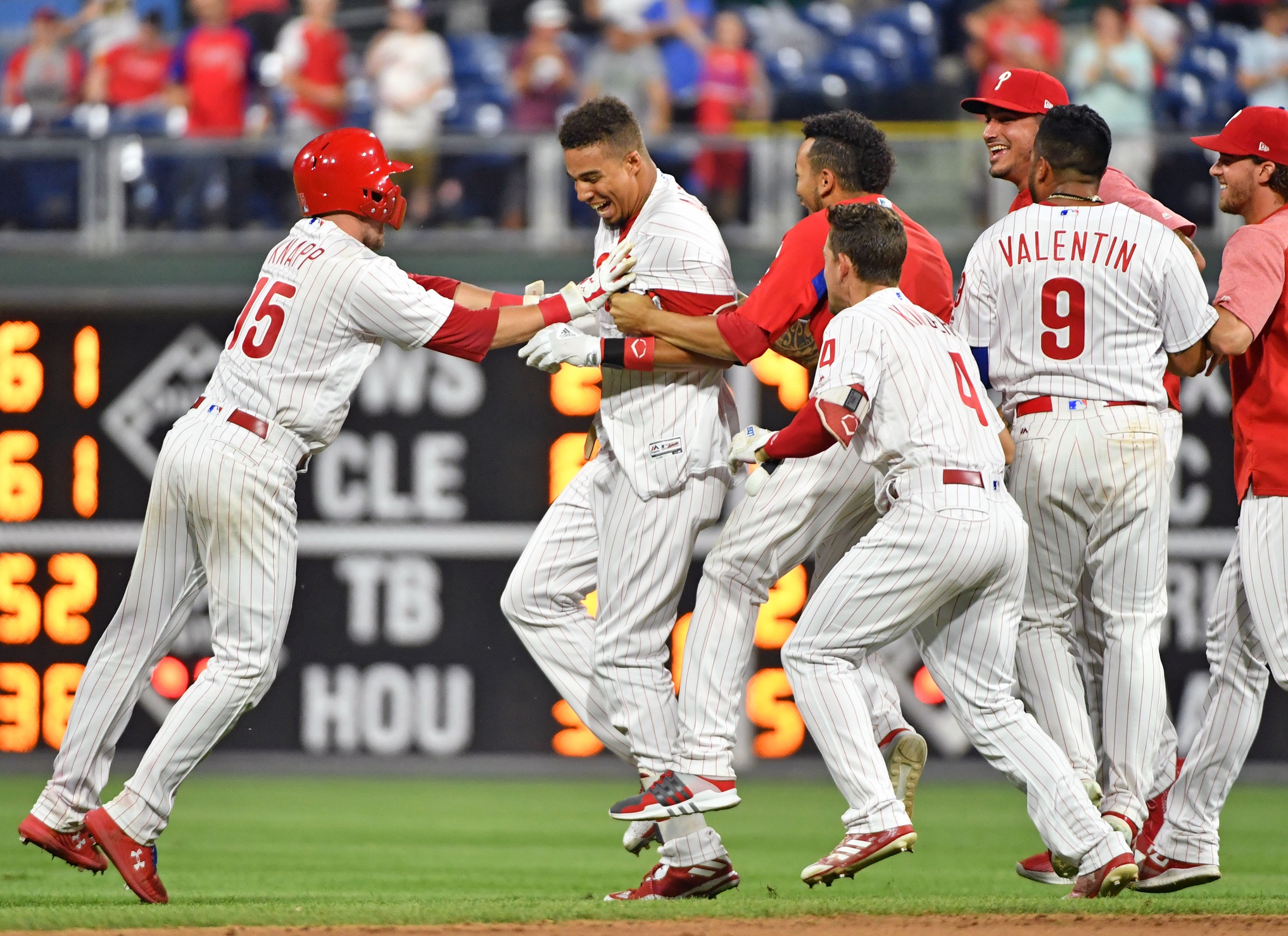 The happiest player in a Phillies uniform on Monday night had to be catcher Andrew Knapp. After letting a wild pitch get by him on a strikeout in the top of the ninth inning and allowing the game to continue after a third strikeout in the inning, the Phillies needed a little help from a defensive gaffe by the Cardinals to be able to celebrate a 6-5 walk-off victory.

On the day that saw the Phillies send Hector Neris down to the Lehigh Valley IronPigs, it was Victor Arano who took the mound in the ninth inning looking to protect a 4-2 lead. Like many Phillies relievers this season, the ninth inning was quite the adventure for Arano, but with two runners in scoring position it did appear Arano was going to work out of the jam and get the Phillies into the clubhouse with a solid 4-2 victory on the strength of a terrific outing from starting pitcher Nick Pivetta (7.1 IP, 4 H, 2 R, 1 BB, 13 K). But a wild pitch got by Knapp on what looked like a strikeout of Yairo Munoz, and the game continued.

According to Phillies beat reporters, Knapp took blame for letting the slider get by him, which he should have. It’s been a rough season for Knapp with struggles with the bat and behind home plate. Mistakes like this can cost a team games, and Knapp hasn’t been able to make up for any of his struggles with his bat or his defense. On this night, it nearly cost the Phillies.

Jake Thompson came into the game to replace Arano, but he was unable to hold on to the lead either with the tying run come across the plate. The game went to the 10th inning, and the Cardinals continued to take advantage of the extra opportunity.

Tommy Pham led the 10th inning off with a solo shot off Thompson, but that was all the damage that would be done in the extra frame for St. Louis. Rhys Hoskins got the bottom half of the inning started with a single, and he advanced to second on a groundout by Odubel Herrera (which was the result of an overturned call at first base following a video review; why Herrera slid into first remains baffling). Carlos Santana was then intentionally walked, setting up the stage for Aaron Altherr, who came into the game to replace Nick Williams after Williams got a bloody nose from a baseball in the outfield.

Altherr did what he needed to do with what looked like it would be a base hit at the most, but a poor attempt and decision to dive for the ball by Marcel Ozuna left the St. Louis outfielder regretting his decision in the blink of an eye.

In the end, this was a fun way to win a ballgame and the win continues to keep the Phillies in the thick of the playoff conversation. The Phillies are now tied for second place in the NL East with the Washington Nationals, who split an abbreviated two-game set against the New York Yankees on the same day. Both teams are 3.5 games behind the Atlanta Braves. Also of note, both the Phillies and Nationals are tied for the second NL Wild Card spot, with the Cubs and Brewers tied for first place in the NL Central, leaving the top spot in the NL Wild Card standings to go to whichever team doesn’t win the division. Of course, another reminder that there is a ton of baseball still to be played, but as I noted earlier today, the Phillies have already let more than a handful of games slip away this season and those games can come back to haunt a team in September.

The Phillies nearly added another blown opportunity to that list of agonizing losses Monday night. They didn’t, which is great, but the euphoria of the win should not gloss over the growing concerns about the stability of the Phillies bullpen or how the offense went silent from the second inning through the ninth after a fast start to the game.

Celebrate the win, but continue to address the concerns about this team. Either way, Monday night felt like a toss-up game this week, and being able to get a win to start off a pivotal week with six games against the Cardinals and Nationals is great to see.