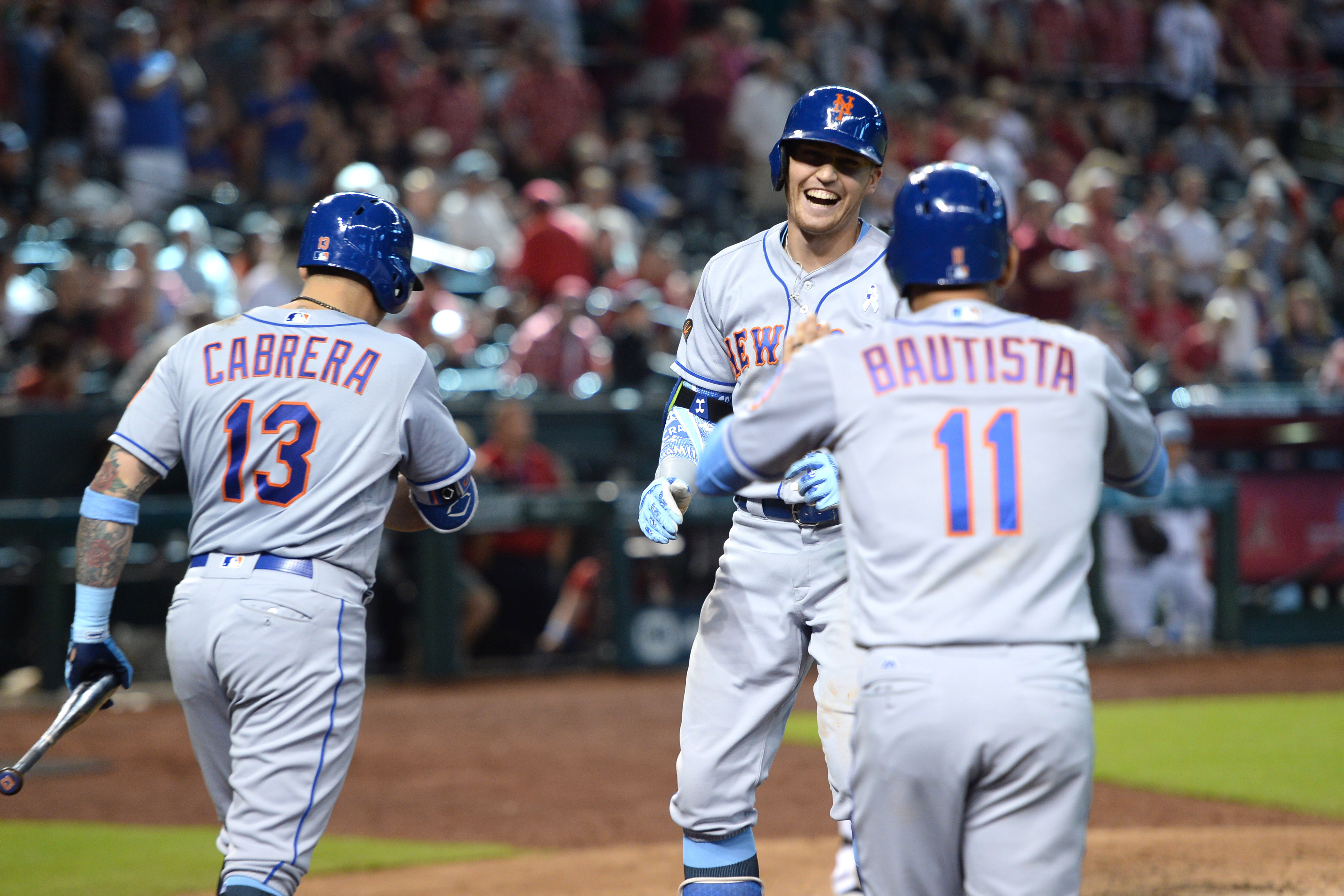 In fact, it was quite the opposite. The errors came before the clutch, this time. Jose Reyes’ two out, nobody on bunt started off as potential irony, as in wouldn’t it be ironic if, after all the needless firestorm over a bunt in 2011, that a bunt single would be Reyes’ final at-bat with the Mets. Of course, after visiting Mets fans sing songed his name on Saturday, that will hardly be the case. And after Alex Avila picked up what was going to be a foul ball, Reyes earned some extra lives as if this was Super Mario 3. Avila reached in the pipe and got them for him.

Brandon Nimmo came up next with the clutch, and he jacked a breathtaking home run over the right field wall to give the Mets an improbable 4-3 lead off Brad Boxberger, who was either too tired or too dismissive to throw much else except fastballs to the Mets. Nimmo turned on one and gave the Mets the lead. Asdrubal Cabrera followed up with a solo HR to make it 5-3 and seemingly salt away the victory. There was no way the Mets could screw this up, right?

Mickey Callaway on Dominic Smith's ninth-inning error: "I don’t think Dom Smith will try to transfer the ball between his legs anymore." https://t.co/uaHLS3DBMK

The letter of the law probably says that Alex Avila should have been out, as Dominic Smith caught the throw from second base, had control (albeit briefly), and lost the ball on the transfer. I mean, if that’s the rule for the first leg of a double play at second base, it should apply here, no matter that the transfer between Smith’s legs was done needlessly. But if calling Avila safe teaches Smith a lesson about needless flair, then I’m happy the ruling went against him.

And before you think that I’m insinuating that all flair is needless: Rickey Henderson never dropped one of his “snap catches”.

Also, we know about Rickey’s snap catches. They are a part of baseball history. Dominic Smith could have done his leg transfer a million times, and nobody would have noticed. Nobody. Hence, that move is needless. (And for Smith to immediately call for a replay after that play might have been worse than actually making that boneheaded play.)

In Mets lore, plays like that come back to bite them, say, 99.44% of the time. Which is to say almost always. Timo Perez slows down because he thought the ball was out? Mets lose a World Series game in extra innings. Ryan Church misses third base while scoring the go-ahead run in extra innings? The Mets lose that game in the very next frame. Smith’s gaffe had three run rally written all over it. But the baseball gods took pity on a franchise getting it from all sides. At nine games under .500 with three teams ahead of them? Sure, letting the Mets get away with this isn’t going to make much difference. At least that’s what the baseball gods are thinking.

Perhaps Sunday’s win is the game that sparks a big run. At least that’s what we’d like to think. Then Brandon Nimmo can take a seat at the table with Mookie Wilson. More likely, this is a game we look back on five years from now and wonder “Why did SNY choose this as a Mets Classic? They finished 58 games under .500 … this is depressing?” Hey, who is that guy managing the Mets, I forgot about him.”