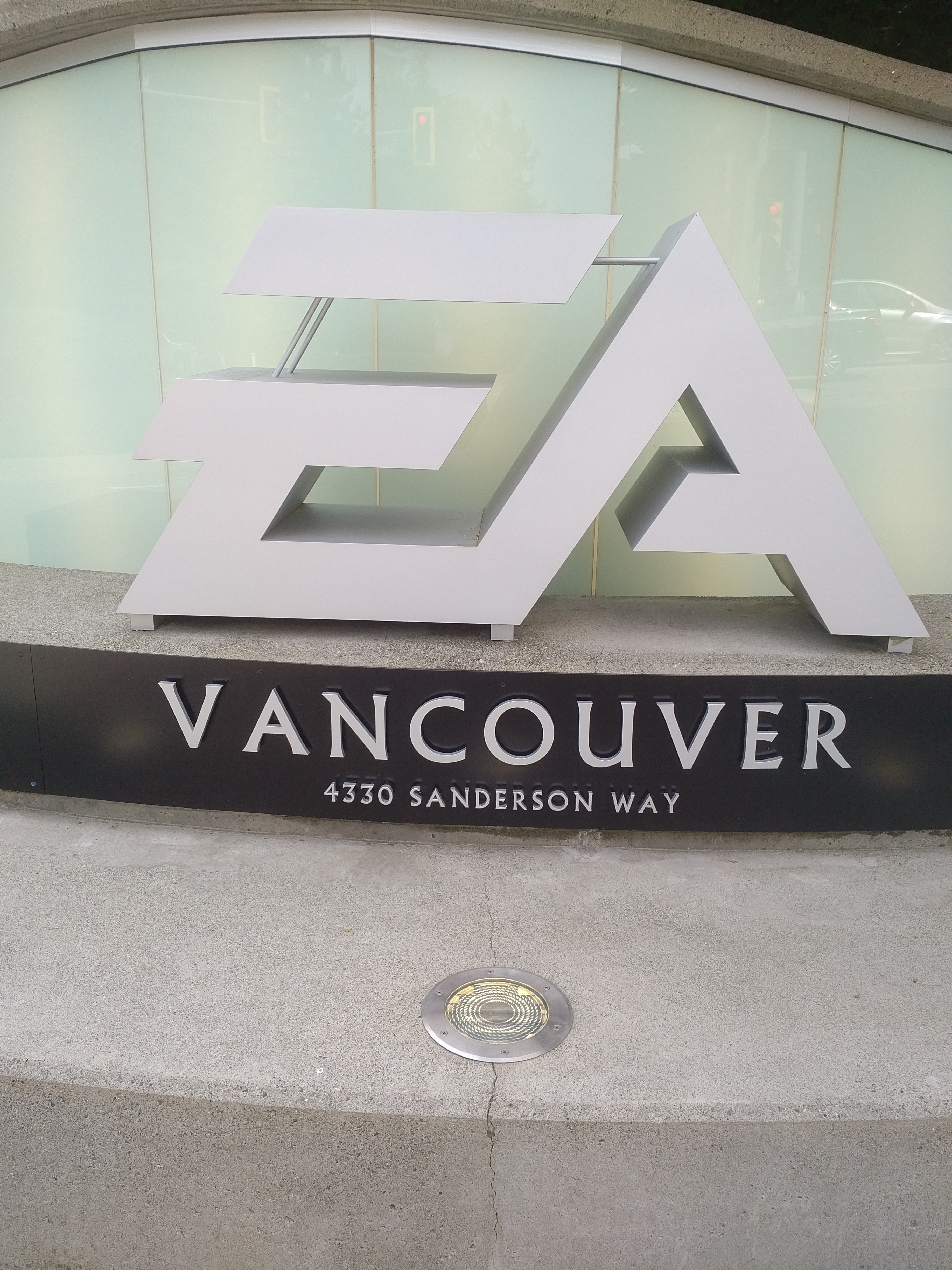 Burnaby, BC. The home of EA Canada. A magical place. I had the pleasure of heading down there for the first time recently – after about an hour on the Skytrain and one challenging bus ride and then an uphill walk to reach a place that’s incredibly mystical to video games of all ages. Trust me, walking uphill in a suit on a hot summer day is not fun.

Why was I at EA? Am I going to be in NHL 19? Am I taking my talents to Vancouver? No and no but I did have the chance to sit down for a fun interview with the lead producer of the NHL series Sean Ramjagsingh!

If you’re familiar with the EA NHL series there’s a good chance via twitter or other social media content that you’ve seen the 6’11 former basketball player affectionally known as Rammer.

Over the past few years, I’ve had the chance to get to know Sean via social media and when I pitched the idea of coming down to EA to sit with him for the Oilers Rig he was more than willing. Since I’m only 5’7 I’m really glad Sean sat down for this as my arms would have probably fallen off trying to hold a mic to his face.

The journey for the Vancouver native into the video game world didn’t begin in hockey as he first entered with Radical Entertainment scouting the plays of NBA teams for their hoops games before moving over to EA Sports to work on NCAA basketball at first in 2000 after Radical lost their license to the NBA and NHL.

His time at EA would take him to the hockey world in the late 2000s where the first game he’d work on would be NHL 09. The NHL series had changed drastically from the days of 2D hockey with a blue crease and no music by the time Sean moved over to the game. For a diehard hockey fan like Sean the first time moving over to the NHL series was incredible with the offer coming at a Canucks game and in Sean’s own words “there may or not have been a few beers flowing that day”.

In Sean’s time working in hockey at EA’s there have been so many changes but three of them were some of the bigger ones that stood out to him.

“There are three things that I think about with the biggest changes, number one is the skill stick. The skill stick changed the way you played the game, it gave you a whole new level of control as you moved away mainly from the buttons.

The second one in NHL 09 which was a big year for us was the introduction of the EA Sports Hockey League. Our vision of that was a virtual men’s league you could grab five of your buddies and play around the world. The social competitive aspect of that mode has really engaged a lot of players, you see people coming back year after year and engage in that mode.

The third one for me is much more recent when we talk about the sport as we know it and the authenticity and where we take some liberties with authenticity but still capture the essence of it in a more casual and mass appeal way is NHL Threes in NHL 18, an arcade-inspired mode (NHL Threes includes powerups, mascots, multi-goal pucks) You haven’t really seen this in our game in a long, long time, it was a really unexpected mode for a lot of people.

We captured the imagination of people who play our games and with all games with right now as we push for more authenticity it’s a great way to bring people back to the franchise. You don’t need to be an expert, you play with the buttons, score goals, there are big hits, mascots are in the game and it goes back to its roots of sitting down on the couch with friends and having fun!”

With a mode like NHL Threes reviving arcade hockey pretty much out of the blue it was cool to learn that it was an addition that came from all on the hockey side of things to bring in to get not just the hardcore gamers on the series.

“It was absolutely a group effort. I think the way we operate at the NHL team we have a strong partnership in the company from the development perspective with our communications team and our marketing team and collectively with a cross-functioning leadership group, we have fantastic conversations about what we want to do week in and week out. It was about how do we deliver a more casual experience for everyone?

Whether you’re a dad who played NHL 94 who wants to play with your kids but haven’t played since things got more complex how do we make a game for everyone? If I’m a hardcore guy who plays EA Sports Hockey League and franchise mode if my buddy comes over and he used to play back in the day how do I get him back into the game?”

Of course, another huge change has been the element of legends such as Wayne Gretzky and Haley Wickenheiser in the series, in years past in video games you could just put any legend you wanted to in a game and away you went, but not so in the era of licenses and lawsuits. Some have been on board, some have had zero interest but others have come on board have with a bit of coxing from the younger generations!

“There are some legends who may not be too into the game but they say my kids and grandkids say I need to get into this game how can I do this?”

The latest incarnation of the game also presented a first for Sean with the series. A real deal NHL expansion team. Of course, fictional expansion/relocated franchises have been a thing in the series for a very long time but for the first time since the 2000-01 season aka NHL 2000 a real-life new franchise came into play with the Vegas Golden Knights.

Vegas proved a few challenges for Sean and Co as a few things had to be totally changed to get the Golden Knights rolling in the game.

“With my developer hat on it was really really hard for us, we knew that expansion was coming but it’s been 17 years since we’ve expanded. We haven’t had to touch any of our codes around our league structure so with the anticipation of Vegas coming in, we actually had to overhaul all of our backend codes and not only set up for Vegas coming in but to future proof it for the 32nd, 33rd, and 34th teams.

Unfourtantly, I was shielded pretty well from seeing what was being cooked up for NHL 19 but yesterday a teaser trailer dropped on the EA Sports Twitter that could mean quite a few things…..

This could answer questions from everything to maybe pond hockey, to a story mode or even to the Frostbite engine, WHAT DOES IT MEAN?!?!

Well gang, like the rest of you, My eyes will be seeing the full reveal of the game at the NHL Awards on June 20th but this year, actually in Las Vegas!

The longevity of the NHL series has been incredible at EA and on Wednesday night we’ll find out what Sean’s team has cooked up from Sanderson Way.

This whole video game business is not such a bad way to make a living for a Simon Fraser basketball alumni.