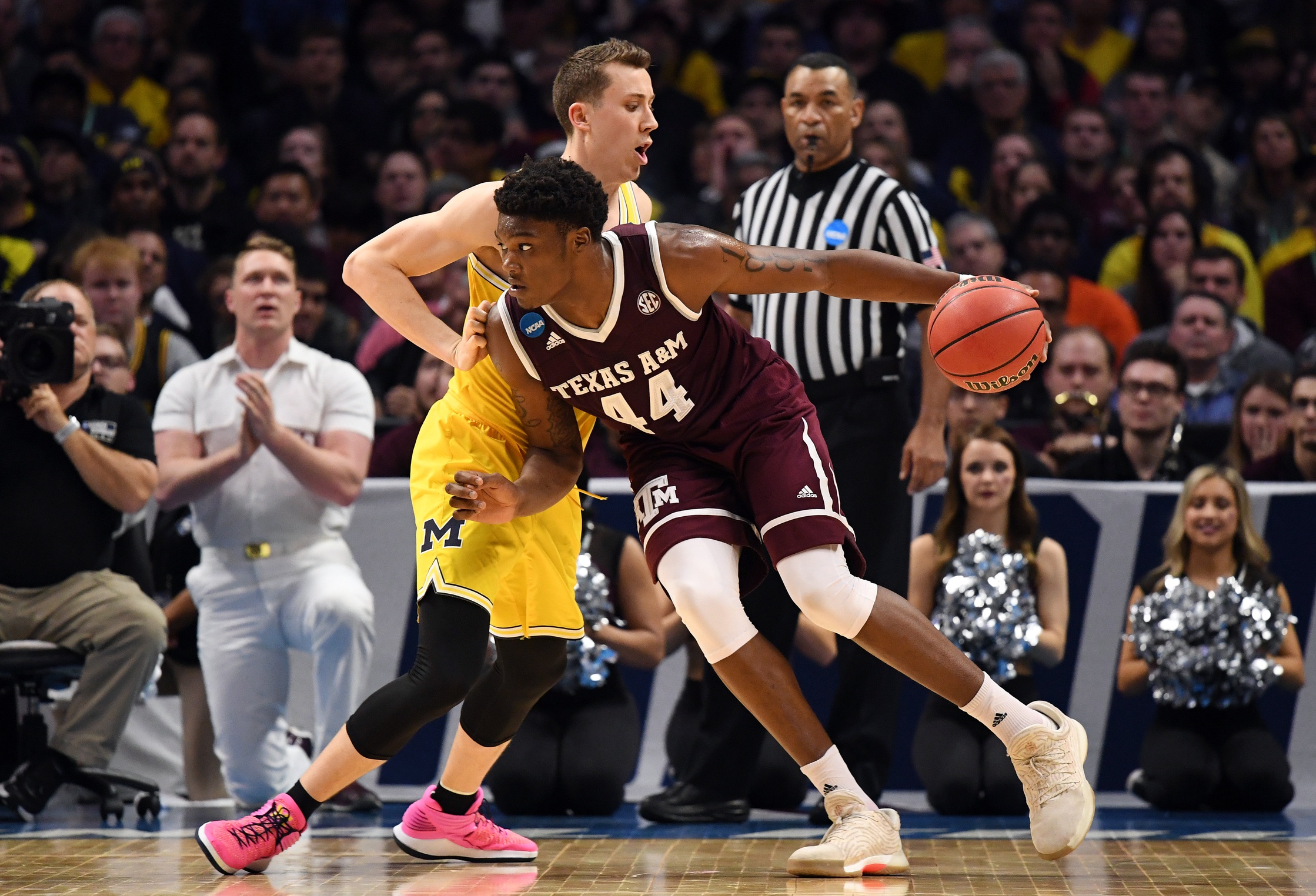 Williams will likely be on the steals of the draft, especially if he drops to the late lottery or beyond. What he brings at the center position: shot-blocking, explosive athleticism, offensive rim-running, and hoops IQ, is the starter package for Clint Capela. Capela began his career backing up future Hall-of-Famer Dwight Howard, and broke out almost immediately after Howard left.

Nevertheless, it was a gradual climb to get here, one which required plenty of patience from Houston’s front office and coaching staff. The same patience should be afforded to Williams, for as smart as he is defensively, he spent the vast majority of his minutes at Texas A&M operating at power forward alongside center Tyler Davis. This allowed Williams to spend more time covering perimeter players, which showcased his defensive versatility.

Furthermore, he exhibited an impressive ability to recover to the paint and make plays as a help defender. Every once in a while he would lose track of the ball on defense, but for the most part he sees the court and knows where the other nine men are located (and thus, where he should position himself). I think there’s a legitimate chance that Williams becomes a more impactful player than lesser defensive center prospects such as Deandre Ayton and Marvin Bagley. And he might prove to be more explosive and mobile defensively than a big guy like Mo Bamba. Context matters, and Williams is a tough player to evaluate given how little he played center for the Aggies. With that being said, I’d feel comfortable taking a shot on Williams in the second half of the lottery knowing that he could certainly outperform that draft slot if all goes well. Where Williams lands will have a lot to do with how much time it takes for him to break out on the big state. If he lands on a team with multiple quality centers he’ll have to fight tooth and nail for minutes as a rookie. If a team that’s lacking rim protection picks him, Rob could emerge as a surprise challenger for Rookie of the Year.

Charlotte (11th), Los Angeles (12th, 13th), Denver (14th) and Washington (15th) could all use a center like Williams. The aforementioned Howard’s days are numbered as a difference-maker, and he’ll be a free agent next summer. Cody Zeller is a good big man whose best days could still be ahead of him. Nevertheless, he’s not so great that Williams should be avoided based on fit concerns. The Clippers could be losing DeAndre Jordan in free agency this summer. Personally I think Williams has a very good chance to surpass Jordan as a defensive presence, and as a result, as an overall player. Denver relied on Mason Plumlee to play spot minutes at center when the Nuggets needed a stop and Nikola Jokic couldn’t get it done. They could absolutely use a center with Williams’ skill set even if it means reducing Jokic’s minutes or playing two-big lineups in small doses. Denver needs to address defense. And I have a feeling Washington is the farthest Williams will fall. John Wall has basically been begging for a big man with athletic advantages, and Rob fits that description to perfection.

Hall of Very Good 4m ago