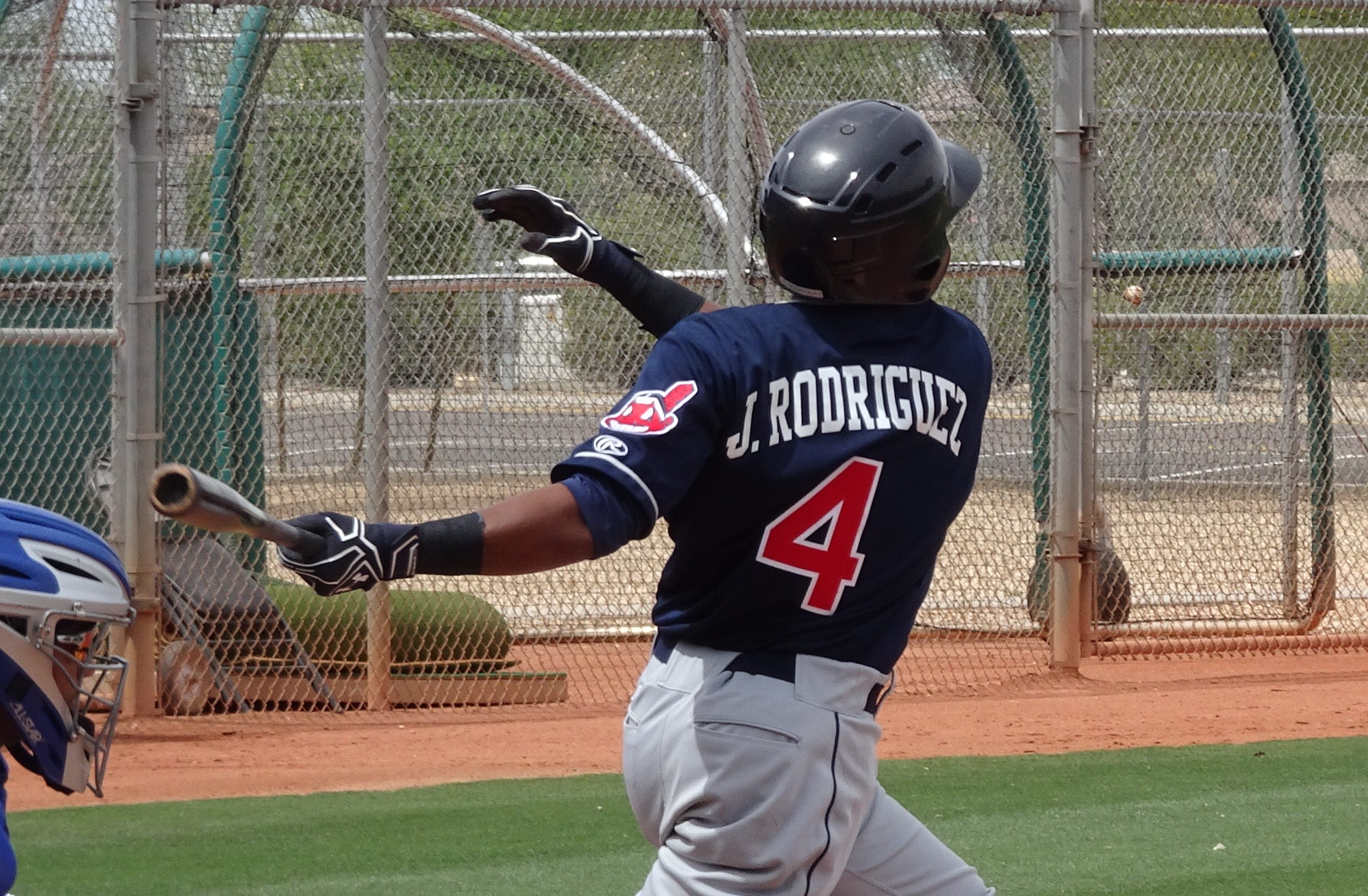 The Indians are incredibly deep up the middle in the minors, with high ceiling players and high floor players with plenty of players who are expected to have at least some future in the Major Leagues. However, like many positions, this makes it difficult to mark players down for a single spot. Particularly in Akron, where three second basemen have forced the Indians to play one at second, one at third and one in left. We will base these selections on players who appear to be destined to stick at second more than who is playing there right now.

From last years list, Samad Taylor was traded to the Blue Jays for Joe Smith while both Claudio Bautista and Kevin Bradley are now free agents. Sam Haggerty has been moved to the third base list and Jean Montero to center field.

By Joseph Coblitz
Maestre is ranked here because the Indians really only have 11 qualifying players at second with the only one missing the list being Jothson Flores, a DSL bench player. Based exclusively on part time work in two seasons for the DSL Indians/Brewers, Maestre is a poor defender at three positions (SS, 2B & 3B), but is best at second, where he has played most often. He doesn’t hit for much power and isn’t particularly adept at running the bases, but he does walk more often than most players at this level.

By Joseph Coblitz
I have to update my report on Jhan after seeing him in 2018 extended spring training as he has made significant strides defensively. One of the first games I saw him play in 2017, Rodriguez turned a hat trick by making three different types of error in one game, missing a catch on an attempted double play, overthrowing the first baseman and misfielding a ground ball. He was used as a utility man this year at second and short and it is no longer frightening when a ground ball heads his way. Offensively, he is still dreadful and I doubt he will make it past A ball.

By Joseph Coblitz
Hankin’s greatest attribute is versatility as he’s played at least 25 games in his MiLB career at six different positions, missing just first base, pitcher and catcher (he did pitch 1.1 innings in one game in 2017). However, he’s already 27 and hit MiLB free agency for the first time at the end of last season before the Indians brought him back. He is hitting nearly or over 100 points better in each of his slash stats compared to last year, but there’s a reason he’s 27 and hasn’t seen time in the majors yet. He’s essentially Michael Martinez light and if he gets a shot with a major league team, it won’t be one with as many good utility men as the Indians as he sits firmly behind Erik Gonzalez and Yandy Diaz in the current depth chart.

By Joseph Coblitz
One of the large free agent class of 2017, Tena sits below Rocchio and Bracho on the depth chart in addition to many players who were already with the team prior to 2018. Because of this, he was limited in playing time in extended spring training and is currently playing off the bench in the Dominican Republic. This is to say that he’s largely an unknown, but one who just turned 17 and has plenty of time to prove himself.

By Joseph Coblitz
If you’re confused by the amount of J. Rodriguez’s in the Indians system, it’s not your fault. John is a right fielder in Arizona, Jhan and Jorma are utility infielders and Jason is a catcher in Mahoning Valley. Of these, Jorma has been with the team the longest and is playing at the most advanced level. He’s had a long trek after starting with the DSL team in 2013, playing two seasons there mostly in the middle infielder, then played two years in Arizona before becoming an organizational utility man, jumping to whatever team needed him the most in 2017. Through it all, he’s generally been a defense first and only player until this year. In a short period in Akron, he went 8 for 24 with three doubles and with his normal level, Lake County, he hit .345/.365/.437. While he has been in the organization a long time, he’s only a year older than the average A ball player, so this isn’t necessarily due to playing below level. Now, he’s legitimately been promoted to Lynchburg and is back to his utility role after playing only 2B in Lake County.

The biggest problem with Rodriguez is his long tenure as he will become a minor league free agent after 2019 if not added to the 40 man roster and his low ceiling makes that unlikely. He should be considered similar to players like Ronny Rodriguez, Todd Hankins and others who have essentially peaked as AAA utility men.

By Joseph Coblitz
While Aaron Bracho was the big name among 2017 free agent infield signings, Rocchio was the stand out in 2018 extended spring training as Bracho was out with a right arm injury. Rocchio is an athletic multi-positional infielder who isn’t afraid to get dirty, greatly extending his range at second. Based on limited at bats in extended and so far in DSL, he seems a decent bat who doesn’t overextend himself. He is more of the old school style of middle infielder as a contact hitter with good speed and quick hands.

Krieger heads off the field during a 2017 AFL game at Camelback Ranch in Glendale, AZ. – Joseph Coblitz, BurningRiverBaseball

By Joseph Coblitz
After missing his first pro-season due to injury, Kriger burst onto the scene in 2016, demolishing pitchers in both Lake County and Lynchburg. In 2017, however, he seemed to hit a wall. He started off the year well with a solid appearance with team Israel in the World Baseball Classic, but had a terrible season in Akron and was even worse in the Arizona Fall League. Now that Mathias is back from his separated shoulder that stalled his 2017 season, Krieger has been moved to left field with some time spent in center as well. Despite repeating Akron for a second season, he is hitting even worse than last year so far, possibly due to the positional move. He still has a ton of potential as an all around solid offensive threat at second, but he’s lost a lot of ground within the organization.

By Joseph Coblitz
Mathias and Krieger have long been linked, but Mathias appears to be pulling ahead. Both were born in 1994, drafted in 2015 (one round apart) and missed their first pro season with injury. They also are both repeating seasons in Akron, but where Krieger was moved off second and is struggling, Mathias has improved every facet of his game over his injury shortened 2017. He’s the superior defender (hence Krieger and Sam Haggerty being moved off position) and an extremely efficient baserunner when he feels like stealing. He has a decent strike out rate and has improved his walk rate significantly this year, so you shouldn’t be too off-put by his batting average.

If the Indians move on from Jason Kipnis before his contract ends and keep Jose Ramirez at third, Mathias could potentially be the next in line. In reality, it’s more likely that Ramirez would move to second and Yandy Diaz or Yu-Cheng Chang would take over third.

By Joseph Coblitz
Like Krieger and Mathias, Friis and Persinger were immediately linked as late round college picks who started their careers switching between infield positions in Mahoning Valley last year. While Persinger has since jumped to high A, Friis remains in Lake County as a starter playing second and third. Based off more than 550 minor league innings, he certainly seems most comfortable at second. Offensively, he’s improved dramatically over last season, hitting .304/.381/.411 in A ball. A fair all around hitter with some speed, but no power, Friis’ greatest attribute could be his contact rate. On a team full of big swingers, Friis’ strike out rate of 11% is a breath of fresh air.

Persinger fields a ball at third base during a 2018 extended spring training game. – Joseph Coblitz, BurningRiverBaseball

By Joseph Coblitz
While his first season left something to be desired as Persinger split time at second and third with Friis and short stop Ernie Clement. Now, playing nearly full-time at his primary position of 2B he is excelling at a very advanced level considering this is just his second season. Persinger essentially skipped Lake County entirely and is hitting .297/.383/.405 in Lynchburg. There’s no question that the Indians love him as they drafted him twice (first in the 31st round in 2015) and his swift movement up the system could be further confirmation. In addition to being a solid bat, Persinger is a good defender at second and third although he doesn’t have the range to play short long term.