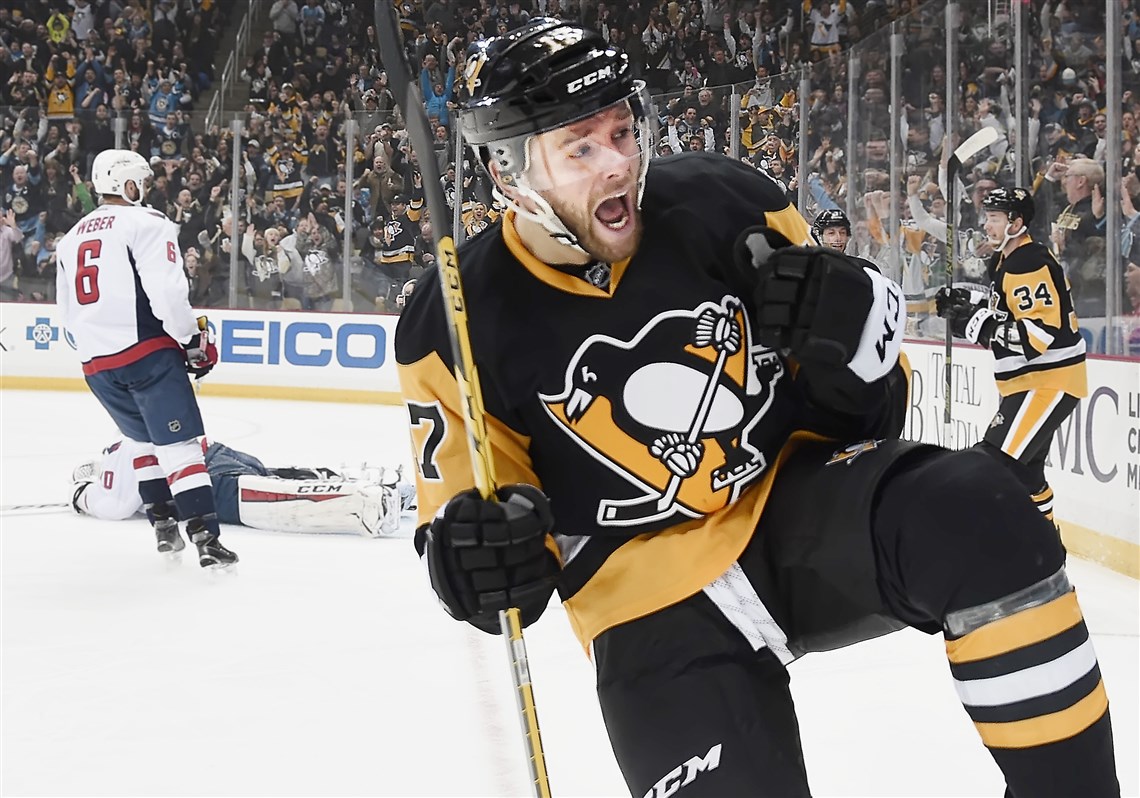 Today the Penguins announced that they agreed to terms with Bryan Rust on a 4-year deal worth $14 million over the life of the deal and $3.5 AAV. This puts him at $500,000 more than Conor Sheary and $500,000 less than Carl Hagelin. But what does this deal mean for the cap and team construction? Well, let’s break it down…

First of all, it’s a pretty good valuation of the Pens versatile forward. Remember, Rust can play both wings, has taken a handful of draws when necessary and not been a complete disaster, and is capable of skating on all four lines. Now, Hagelin’s deal was acquired not constructed by the Penguins so it makes more sense to use Sheary’s and Hornqvist’s deals as comparisons.

Sheary comes in at $3 Million AAV and last year put up 30 points in 79 games which was low for him. That’s good for 0.34 points per game or around $100,000 per point. Hornqvist, who just signed an extension mid-season for $5.3 AAV, had 49 points in 70 games last year, which is 0.7 points per game. Meanwhile, Bryan Rust played one game less than Hornqvist, 69 (nice), putting up 38 points seeing less favorable deployment. This meant he came in at 0.6 points per game.

Looking at their production numbers it’s impossible to say 17 wasn’t worth the money. Not to mention his penchant for scoring those big goals (Hello, ECF 2016) in the playoffs, he’s known as a “clutch” performer and Mr. Elimination. And this contract locks him up for four years which takes him to the end of the Malkin, Kessel, Letang, and Maatta deals. Meaning it puts the team in a place to succeed while they still have all of their big horses locked up.

The issue, of course, comes in the form of the Penguins now having expensive wingers up and down the line-up. No matter which way you slice it, someone on the fourth line as the team is currently constructed will be making more than 3 Million a year (Props to G-Off for pointing this out). You have Hagelin at 4, Hornqvist at 5.3, Sheary at 3, Rust at 3.5, and Kessel at 6.8. That’s five wingers. There are only four top-six winger spots and with Guentzel not leaving Crosby any time soon and Sprong signed to a one-way deal… two of those guys could easily end up on the bottom line.

But there are reasons not to fret too much about that. One is that both Hagelin and Sheary’s deals end fairly soon. So, even if this year proves tight, they open up money in short order which they will need for Jake Guentzel (who we will all now call JG). Two is that we all know GMJR is not done constructing this team. He wants threats to put the puck in on all four lines. The Skinner acquisition is not out of the question yet and they’re already clearly dumping some players they don’t necessarily see with the offensive upside of others (Sorry Kuhnhackl and probably Rowney).

Not to mention some analytical minds make the signing look even better.
There’s this from Matt Cane who projects contract numbers:

This from Manny Elk, who compares players:

Bryan Rust is real good. My player ratings place him as the 50th-best RW, sandwiched between Josh Anderson and Ondrej Kase.

And to add context, this tweet from Cap Friendly shows who else makes around that in the NHL:

Most comparable contracts to #Penguins Bryan Rust
$3.5M at 4 years:

Prior to signing Rust, I said the team would have to choose between him and Sheary. With this investment of term and salary, it’s clear they’re choosing Rust. All that’s left really is to see when/if they move Sheary for an asset to a team desperate for speedy wingers. Now look, I know Sheary’s value is low right now after having a very meh year but at this point, the cap space is what’s most useful.