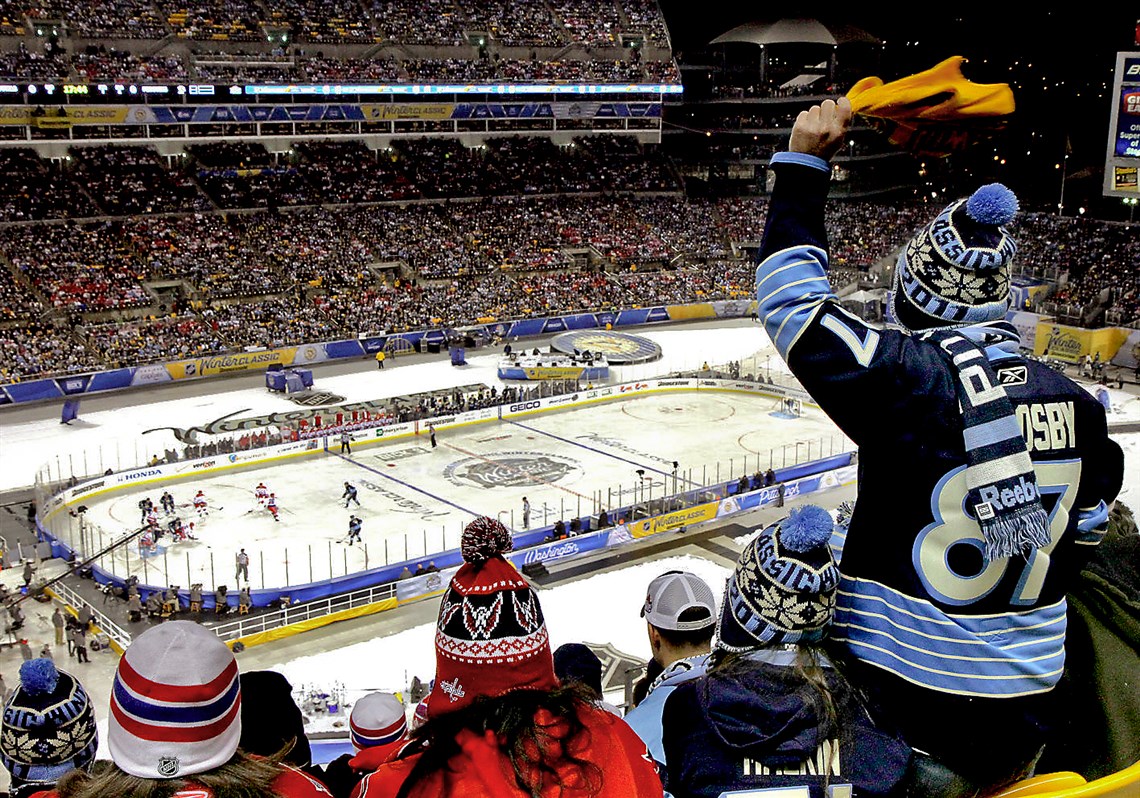 “It’s a rollocking scene in Buffalo, New York as the NHL has taken it outside! This is Ralph Wilson Stadium. Where the Pittsburgh Penguins and Buffalo Sabres are set to play on a rink constructed atop the Buffalo Bills football field and more than 73,000 are here to witness it…in a game they’re calling ‘The Winter Classic.’” – Bob Costas, NBC – January 1, 2008

Don’t we all remember that? You woke up on January 1, 2008 hungover from last night’s festivities and remembered, “that’s right, the Penguins have that Buffalo outdoor game today.”

Although they didn’t infringe too much on college football, the 2008 Winter Classic garnered a 2.6 rating and 5 share, the highest rating for a regular season NHL game since 1996. They may not have eclipsed college football, but they shoved their way into the lexicon.

So there it was, the NHL took a risk, put their poster boy front and center and suddenly, they were in the national conversation.

Ten years later, has the NHL taken over New Years Day with the Winter Classic? Far from it.

Let’s break down just the Winter Classic of the last ten years:

Ten years in and only ten teams have seen these nine games. In a classic NHL move, after taking a big leap with the Winter Classic, they instantly retreated to playing it safe.

Take a look at the teams that have been in the event. They’re all safe, popular television markets. The league will pay the lip service about wanting to grow the game and expand the game, but outside of the Stanley Cup Final, they’ve retreated to safe, established markets for their signature event. Sure, that will bring in ad revenue on NBC and NBCSN, but grow the game? How many people are ready to watch Boston in their third and Chicago in their fourth Winter Classic come New Years Day 2019? I’m not.

Watering Down the Spectacle

The first Winter Classic was a sight to behold. It was new, it was fresh and had plenty of luck. The environment “cooperated” it snowed, it was windy and it looked like a postcard. The Penguins scored early, the Sabres tied it and this relatively new thing known as the shootout was won by the poster child Sidney Crosby.

It was the jackpot they needed.

Why has this happened?

Aside from what we stated above, the same nine teams being involved for ten years, but the Stadium Series watered down the importance and uniqueness of the outdoor game.

Following the 2013 lockout-shortened season, the NHL felt (admittedly, somewhat correctly) the best way to get casual eyes back would be to have more than just the Winter Classic. They introduced the Stadium Series.

Four outdoor games would be played following New Years Day, but once again, three of the seven teams involved were safe TV markets and teams that had already played in a Winter Classic.

So obviously, four games, one on the west coast where having a hockey game outside seems implausible and three in historic venues would get people interested, right?

Only two of the games would produce over a million viewers. Yankee Stadium Part One drew a hair over two million and Penguins-Blackhawks would get a 2.1 national rating, setting the record for a regular season game outside of the Winter Classic on NBC.

Now obviously hindsight is 20/20, but one has to believe that putting teams that haven’t played in the event yet would help a ratings boost (think Nashville, Tampa Bay, Dallas) but the NHL as usual, played it safe.

Next season, the outdoor spectacle will be one that we have to believe will garner next to no ratings boost.

Once again, the NBC Blackhawks highlight the outdoor schedule. From a strictly safe standpoint of view, the markets of Boston and Chicago on New Years Day at Notre Dame should be a home run, but one can likely assume most hockey fans have Blackhawks Outdoor Fatigue.

The same can be said for the Stadium Series. For the second time in three years, the Penguins and Flyers have an outdoor game scheduled.

Now, I know what you’re thinking: “Did the NHL finally listen and put the Penguins and Flyers at Beaver Stadium?!”

The 2017 Stadium Series was at Heinz Field and 2019 will head to Lincoln Financial Field.

So rather than a 50/50 crowd at a historic venue, it will be a hometown crowd at a stadium most people couldn’t pick out of a lineup without logos or branding.

Can This Be Fixed?

This is tough to say. When the Penguins and Sabres played in 2008, the NHL caught lightning in a bottle. They had a forward thinking event, they marketed it well and picked two teams that didn’t disappoint.

Since then, they’ve had too much of a good thing. They crossed the threshold of 20 outdoor games in ten years. Sure, it averages out to two per year, but it hasn’t been that simple nor have they branched it out. Outdoor games seem like a cool kids club and when fanbases like Minnesota (a state that has notoriously cold winters, perfect for the pond hockey angle they LOVE to bash us over the head with) have experienced only one outdoor game, the interest and uniqueness fade quickly.

I’m a sucker for hockey, from October to June, if there’s hockey on and I don’t want to flip through Netflix for the 20th time, I’m tuning in. Chances are if you’re reading this, you’re the same or at the least a Penguins fan. So, chances are you’re tuning into these events and I’m not going to tell you to stop, because I won’t be either.

That said, if the NHL wants to take another stab at working their way into people’s New Years Day television viewing, we’ve got some work to do.

The ratings for this event, quite bluntly, suck. The first iteration of it was fine. You took a shot at recapturing casual fans after a self-inflicted lockout wound and missed. Shit happens, but the definition of insanity is doing the same thing over again and expecting different results.

Plus, outside of two games in California, we’ve seen the same markets get the same attention. Chicago, Pittsburgh, New York, Philadelphia, Washington. In a league of 31 teams, when 26 markets are constantly passed over or only get one every six years, you aren’t getting your national audience.

Just like they missed the 2018 playoffs, it’s time for the Blackhawks to miss the Winter Classic, for at least five years. At least.

Listen, I’m fully aware that teams like Chicago, Pittsburgh, Washington and a handful of others draw eyeballs because of their marquee talent, but we’re not talking about a Thursday night matchup at United Center or PPG Paints Arena. You’re specifically trying to reach new audiences with these events and when one team has been highlighted for it six times, people are going to get bored with it.

Sorry, Chicago fans, but you’ve had your fun and frankly so have the Penguins. Chicago, Pittsburgh and Boston need to go. The talent in the NHL has never been deeper and it’s time to share the spotlight.

Take It Out of the Ball Game

The most watched Winter Classic to date is 2014 between the Maple Leafs and the Red Wings. Did two big markets of two Original Sixes help? Of course, but remember the venue.

When it comes to the Winter Classic, the spectacle comes first and the hockey comes second. The 2008 Winter Classic, if played indoors, would’ve been largely ignored because it was a pretty shit hockey game. Both teams scored early, the second period was sloppy and not much happened in the third or OT. It went to a shootout and that was that.

“Crosby and the Penguins won in a shootout against Buffalo last night 2-1 at HSBC Arena (or Mellon Arena) despite being outshot heavily.” That would’ve been your lede, your copy on TV and your tweet.

Since it was held outside, it snowed and it was unique, it was broken down from every angle.

The 2019 Classic may draw well since it’s a historic college football venue, but in the last ten years there have been three NFL stadiums and six MLB stadiums. At this point, we’ve seen that. It’s time to think way outside of the box or start incorporating college venues.

If I can steal an idea from Dave Lozo of Vice Sports and the podcast Puck Soup, the 2020 Winter Classic should be the Nashville Predators vs. the Tampa Bay Lightning at Bristol Motor Speedway.

You want new viewers? Make this a spectacle. Marketing a hockey game played at a historic NASCAR track with the likes of PK Subban, Steven Stamkos on New Years Day is really, really hard to screw up.

It’s constantly two steps forward and four steps back with the NHL, but there’s a chance to stake a claim to New Years Day with the Winter Classic. They came damn close in 2009, but they played it safe once again and they’re spinning their tires as usual.

When you’re the fourth most popular pro sport in North America, safety is death. Take the dive, because there is treasure to be had at the bottom of the sea.