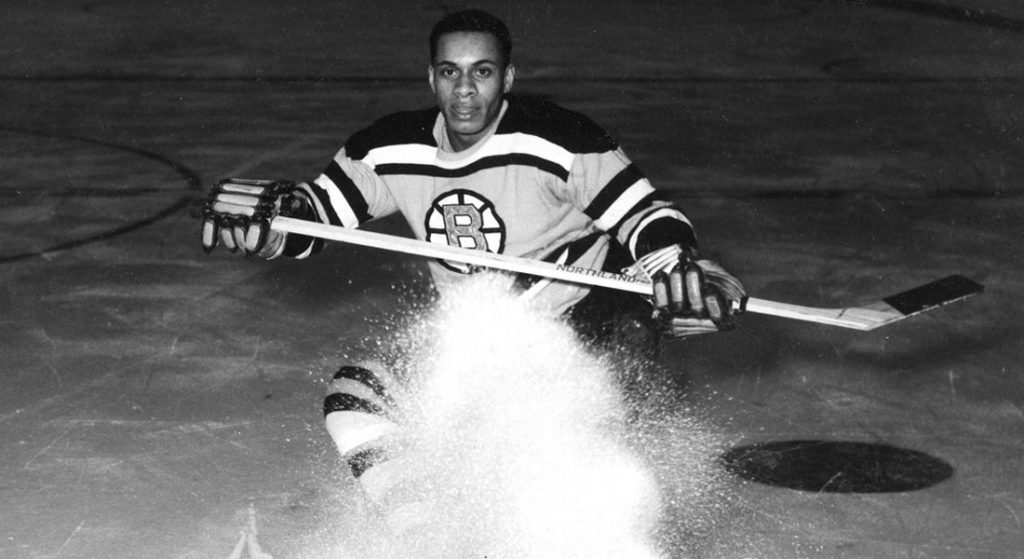 “See that man sitting in the blues? That’s Conn Smythe, owner of the Toronto Maple Leafs. He says he’d take you tomorrow if he could turn you white.”

No, this was not a patronizing quote once said to newly-inducted Hockey Hall of Fame member Willie O’Ree when he was a young hockey prospect.

Rather, it was 1938, still 20 years before O’Ree would become the first black player to skate in the NHL. The player that Smythe coveted was Herb Carnegie, the son of Jamaican immigrants, a 19-year old local junior star from Toronto. Carnegie starred on every team and every league he played in, but like Josh Gibson in baseball, he waited and waited for the chance to be the one to integrate hockey, but that day never came.

Yesterday, when Willie O’Ree finally received the call informing him that he was now an honored member in the Builders category of the Hockey Hall of Fame, the legacy of men like Carnegie, who passed away six years ago, joined with O’Ree in celebrating his enshrinement.

Until the night of January 18, 1958 – the middle of the NHL’s 41st season – no black player had ever played in the league. Let’s not mince words. This was not a coincidence. This was racism in its most open form. As in major league baseball where all 16 teams silently colluded for over a half-century to keep the sport segregated at the highest level, the National Hockey League’s six clubs all toed the same quiet color line: No team shall employ a black player.

Herb Carnegie was a veteran on the Quebec Aces when young, future Hall of Famer Jean Beliveau joined the team.

Thus for over four decades, the NHL systematically undercut the quality of their own league by discriminating against blacks. Think of the hundreds of talented black players skating in obscure towns on obscure teams, dreaming of moving on to the NHL like their white teammates. But it would remain only that – an unreachable dream – always present but always unattainable, fading dimmer every year with the passage of time.

A self-made man like Conn Smythe, himself the subject of discrimination growing up poor and Irish in Anglican Toronto surely would have identified with the struggle of the talented Carnegie. Sadly, then as now, Groupthink and evil social mores are powerful external pressures and even Smythe, once the most powerful man in hockey, could not bring himself to stand up for black hockey players and take a stand to end hockey’s color line.

Not one team owner or manager dared to publicly reason that he could improve his team by scouting players of all ethnicities and colors. Better talent, better hockey team, better gate receipts – stunningly simple logic, but no one had the courage to do the right thing.

So it was that Willie O’Ree in 1958 was the first black man to play in the NHL, ironically debuting in Montreal, the same city that 12 years earlier had seen a young Brooklyn Dodgers prospect named Jackie Robinson integrate organized baseball.

As the visitors’ bench door at the Montreal Forum opened and he skated his first shift wearing a black number 18 on his white Boston road sweater, O’Ree likely never had the time to think of the door he was opening for future black hockey players. He never could imagine that 60 years later, the Hall of Fame would call his name not out of guilt or merely to rectify a historic wrong but because he was a hockey builder in every sense of the word. A dignified, persevering trailblazer and later in life, a respected ambassador for the sport.

Today, even an enraged Grand Dragon would not dare to be so blindly ignorant and deny the contribution of black hockey players in the NHL. From P.K. Subban, Dustin Byfuglien and Seth Jones to Wayne Simmonds, Joel Ward and of course, imminent Hall of Famer Jarome Iginla, the quality of hockey improves when teams search for talented players of every color and nationality.

At the fountainhead was Willie O’Ree, Hockey Hall of Famer, who paved the way, sixty years ago.