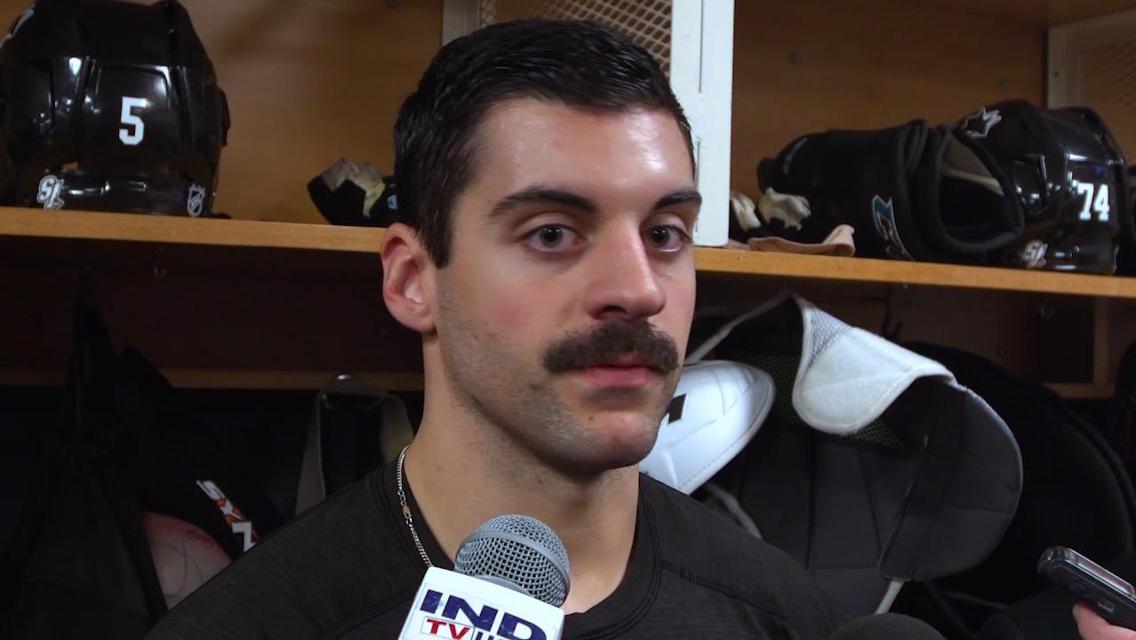 If you’ve heard the (unverified) rumors, you’ve surely felt the rumble beneath your feet as some Internet heavyweights go toe-to-toe over someone as useless, underwhelming, and marginal as Jack Johnson.

And while I went into great detail yesterday on Twitter about this replacement level defensemen that couldn’t shutdown Windows 95, this will not be another Jack Johnson post.

In each bucket, he is on the ice for more against than for. That is simply not good.

In fact, there is one single reason behind why that is:

the thing about jack Johnson is that he sucks ass

Still, members of our infamous Hockey Mecca Pittsburgh Media are doubling down on Jack Johnson being good (he’s not) while the rest of us tethered to this reality believe he’s very bad (he is).

One of those members, who will not be named because he doesn’t deserve the attention he so desperately craves, had this to say in a post today attempting to shame people for overwhelmingly being opposed to signing such a bad player:

Now, instead of carrying on about how bad of an idea it is to sign a declining 31 year old defenseman that couldn’t even crack the Blue Jackets lineup in the playoffs because of Ian Cole, giving him term and too much money despite him being consistently awful over his entire 12 year career, after dumping salary handcuffs just days earlier, let’s take a step back and look at the bigger picture here under the pretense of “Give me a free agent that has higher upside and fewer warts than Johnson.”

First thing’s first, here.  The Penguins, in this blog’s estimation, do not need another left handed defenseman.

That’s your 6 right now (Oleksiak still remains an unsigned, qualified RFA).  When you peep that left side, it’s hard to argue with it being set.  Dumoulin is brilliant, Maatta was good last year and Oleksiak settled in as the year progressed.  Letang and Schultz are locks on the right.  Ruhwedel, who had a very good regular season and was a staple in the playoffs, is probably your weakest link on the back end.  Not to discredit the play of Ruhwedel last year, but out of those 6, he’s the 6th best.

Couple that with the fact that left handed D are easier to find and the fact that the only LHD hitting UFA that’s worth a damn is probably Calvin de Haan (who will most definitely price the Penguins out, despite coming off an injury season), it would make more sense to bring in a RD when free agency opens rather than a lefty.

Put another way: the LHD free agent market sucks this summer and even if that’s viewed a hole for the Pens (it’s not), there is no need to sign a bad lefty just for the sake of signing a lefty.

Bearing that in mind, let’s take a look at the right handed UFA market (sorted by last season’s cap hit, via capfriendly.com).

Some fair NHLers stick out there.  Mike Green had a decent year. Andrej Sustr helped anchor a very good Tampa D.  Pateryn and Folin played a good amount for Dallas and LA respectively.  Ryan Sproul and Frank Corrado are supposed to have some upside allegedly.

But for my money, I’m taking a good hard look at Dylan DeMelo when July 1 hits if I’m GMJR.

DeMelo, the 25 year old London, Ontario native was drafted in the 6th round of the 2011 draft by San Jose, going on to score 97 points (22 goals) in 131 games in the OHL following his draft year.  He spent a few years toiling between the A and the Sharks big club, making his NHL debut in the 2015-16 season.  This past year, he found himself as more of a regular in the Sharks lineup, mostly paired with Brendon Dillon in that 5/6 hole, collecting 20 assists in 63 games.

While DeMelo isn’t the type of player that is going to blow you away with his points, he’s cut from a similar cloth as Chad Ruhwedel and, to a degree, Brian Dumoulin.  He’s a fluid skater who plays a solid two-way game and moves the puck out of his own zone very well.  He’s got a crisp first pass and has the ability and know-how to skate the puck out of danger when necessary and has a brain for the NHL.  He averaged about 14:12 per night in the regular season, which jumped to 15:36 in 10 playoff games, including 1:01 on the powerplay and 0:37 on the penalty kill.  Additionally, he saw his postseason TOI increase over the course of the playoffs, topping off at 19:59 in the Sharks elimination game against Vegas.

What’s more is that he is coming off a contract that collected a cool $650k against the cap, his second NHL contract, in which he received no qualifying offer from the Sharks.  In other words, it shouldn’t take much cap space to sign him (some models have him at around $2.1M per year max) and certainly won’t eat up anywhere near the amount rumored for Jack Johnson (while also being 6 years younger).

As mentioned, DeMelo isn’t going to light the world on fire with his point output.  He’s got 32 in 133 career NHL games.  However, of his 20 assists last season, 15 were at 5v5 play and 8 of those came as first assists.  He averaged just over a shot on goal per game at 5v5 last season, while attempting 135.

Along those same lines, he’s got some very respectable underlying numbers over his career (all stats below are at 5v5, via naturalstattrick.com), where he’s shown an affinity for not getting locked in his own end of the ice, a stark difference than that of Jack Johnson for those of you keeping track at home.

What you see here is a player that is pretty steady in a traditionally sheltered, bottom pairing role.  DeMelo saw just over 49% of his shifts start in the offensive zone, but by and large he kept the puck there too.  But in every data bucket above, he’s shown he is more than capable of not being a liability defensively by being on the ice for more shot-based and goal-based events for his team than against his team.  That’s all you can ask out of your bottom pairing defenseman.

Simply put, everything about him screams “bargain buy.”

i took all ufa skaters from capfriendly, removed players w/ <20gp, added dom's gamescore from 2017/18 (taken from corsica), paired it with matt cane's maximum aav from his projections, and divided max aav by total gamescore to try and find potential bargains.

To me, DeMelo is a guy that should be on a lot of GM’s radars and even more so on the Pens’.  His body of work thus far and style of play make him a great fit to add depth to their blueline and he strikes me as a player that would make a seamless transition to Sullivan’s and Martin’s D system, with the added influence from Gonch.

So, Unnamed Sports Man, there is at least one name of a player the Penguins should target instead of Jack Johnson.  You’re welcome.