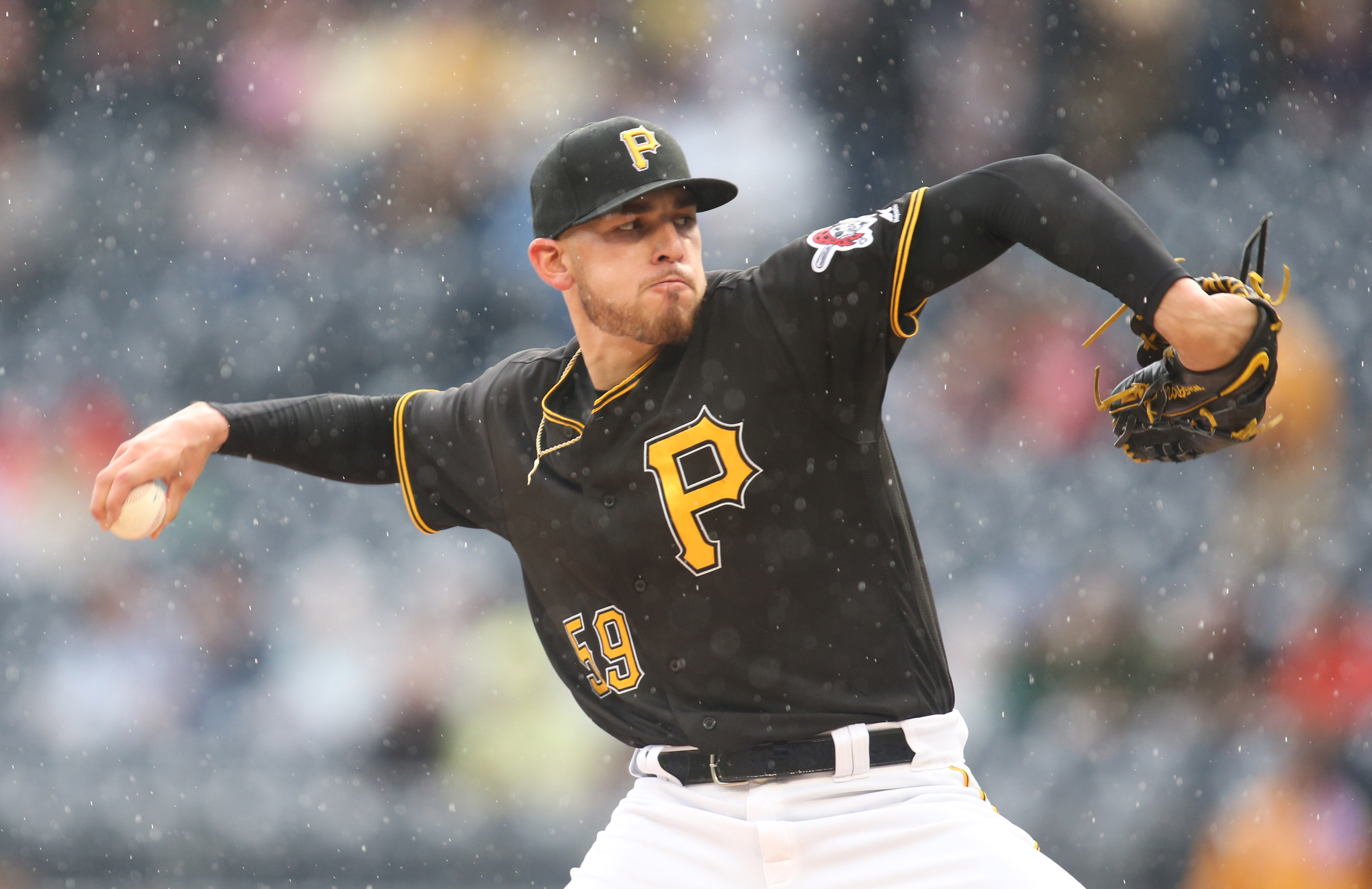 New Pittsburgh Pirates starter Joe Musgrove has a plethora of pitches, including the cutter in which he has focused on this season in favor of the slider and curve.

Musgrove throws a fourseam, a sinker, and a cutter.  That’s three fastballs, and the Pirates love their fastballs – they’re once again leading the league in fastball usage at 64.4 percent.

This combination of fastballs led to Alex Stumpf of The Point of Pittsburgh to call him the anti Gerrit Cole, in which he writes “He’s a fastball pitcher on a fastball loving team. It seems like a perfect match.”

There’s some theory to that, as a three pitch fastball pitcher is a perfect match on a fastball loving team.  He’s made six starts for the Pirates to a tune of a 4.59 ERA, and his first two starts where really good, allowing one run in 14 innings.

His groundball rate is 44.2 percent, one again about where he was in the past.  The difference is his home run rate has fallen down to 2.0 percent from the 3.8 percent in 2016-17, in part because his home run per flyball rate is only 7.9 percent.

So Musgrove is about the same pitcher as he was in the past but is suppressing home runs more, though it’s only six starts with five of them coming at the pitcher friendly PNC Park.

The good news is his FIP is 3.49 and his DRA (RA9 scale) is 3.82.  He should be better than he’s been, though it still qualifies as a mid/backend starter.

He should converge to those numbers as the season goes on, but it’s only been six starts (33.1 innings), so it’s still a small sample of starts to lead to the conclusion.

But how can the Pirates get Musgrove to see that improvement going forward?

Maybe it’s by looking at his pitch mix and distribution.  Below is how often he’s thrown each pitch according to Brooks Baseball:

Using the data from Brooks, here’s the full breakdown of the at bats ending in each pitch:

After opponents hitting .275 with a .473 slugging, a big reason for his lack of success last season was the high slugging, Musgrove has limited the damage to just a .425 slugging, though his batting average against is .284.

But looking at the results of his curve (eliminated in 2018), cuter (increased in 2018), and slider (decreased in 2018) leads to a conclusion different to the one in which Stumpf was led to.  Narrowing the table from above down to those three pitches leads to these results:

The slider, on the other hand, held opponents to a .183/.282 average and slugging, which as a reliever really became his weapon.  While the average and slugging is up in 2018, the overall effect is just more singles as the ISO is way down (opposing hitters also have a .500 BAbip on the pitch, so he’s likely rather been unlucky in at bats ending on the pitch).

The curve was a decent pitch last year, playing up as a reliever, as he cut down on the pitch (8.66 percent overall and 10.26 percent as a starter).  Th

The 2017 strikeout rate per at bat of 14.81 percent on the cutter is low, but that’s on at bats ending in that pitch.  In account of fairness, here’s a breakdown of the pitches in two strikes.

So since K/AB isn’t really a good measurement since at bats ending in strikeouts is limited to use with two strikes, and Musgrove used his slider about a third of the time with two strikes (top of the chart) and his cutter less than that.  And overall with two strikes, Musgrove in the past really went with the curve and slider, and there’s good reason why.

So here’s the whiffs/swing on the curve/cutter/slider, a more accurate way to judge than K/AB:

Musgrove just isn’t getting whiffs on the cutter when batters swing, similar to 2017.  The difference is that he’s no longer throwing the curve, and despite the slider missing many bats so far, he’s not throwing it as much (just 15 percent compared to upper 20s from the previous two years).

Musgrove does have similar strikeout rates, but what if he can improve upon them?  Maybe he should go back to the slider and curve combo and go less with the slider?  That sounds good in theory, but he told Liz Bloom of the Pittsburgh Post Gazzette that:

“It was the pitch that I would go to whenever I needed a strike,” Musgrove said of his slider, “but since I started developing the cutter I’ve kind of lost a little bit of feel on the slider.”

Losing the feel of potentially your best pitch (his run values the last three years are 1.5/8.4/-1.1 according to Fangraphs) is never good.  Part of the problem on why he’s struggling and the loss of the feeling is how similar the two pitches actually are, the cutter is usually just a couple of miles per hour harder and has less vertical break.

Using the pitchRx package, we can visualize the two pitches path, with the pink being the cutter and the green being the slider.  The two break in similar paths with the slider breaking more down than the cutter:

But for Musgrove’s comment saying he has lost the feel for the slider (he’s using his grip against RHB and Chad Kuhl‘s against LHB according to Bloom), that can be seen in the horizontal and vertical movement

His slider is breaking, on average, less vertically and is breaking half as much horizontally this year than in the past.  Visually that can be seen in a plot:

The ball isn’t breaking as much glove slide as it once used to, and that was the pitch he used excellently with the Houston Astros last season, especially coming out of the bullpen.  While he’s still getting whiffs on it, the pitch has seen a higher average (though that comes with the high BAbip).

Right now Musgrove is underperforming his indicators and that comes with not being able to have the feel for his slider.  But how can he improve?  What if he drops the cutter in favor for more of the slider, his best pitch in the past?

It was the slider that got his strikeouts last year, 33 of his 98 strikeouts came on that pitch according to baseball savant (34.38 percent).  Why?  Because it had some nice movement to it and generated swings and misses.

Getting back to that slider and less of the cutter, i.e regaining the feeling of it, should help Musgrove to get to where his peripherals indicate he should be through his first six starts.

Dropping the curve, something which he did going to the bullpen last year, was perhaps the correct move given the power numbers against it.  But now with his cutter not producing results, it’s time to regain comfort in the slider.  Joe Musgrove isn’t the anti Gerrit Cole, he might be Gerrit Cole in the fact he’s stopped throwing his slider.  And that’s his best pitch he tabbed to develop a third form of the fastball and another pitch to his mix.