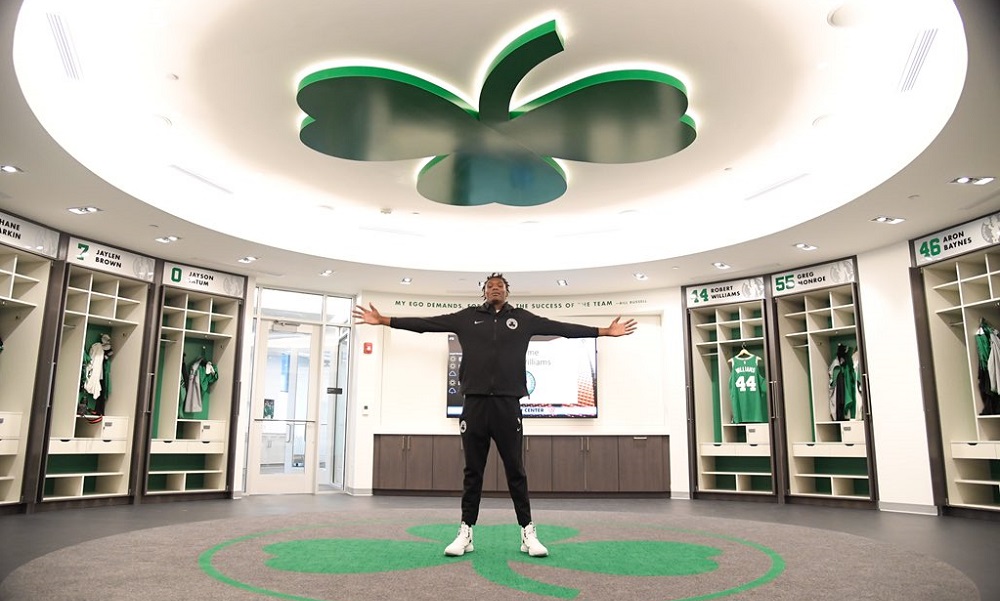 Welcome to the Christmas Eve of NBA free agency. After midnight tonight, NBA general managers may openly make contact with the players they covet (turn on your Twitter notifications for #Wojbombs). But first, Celtics draft pick Rob Williams was introduced to Boston yesterday.

.@rob_williamsIII got his first taste of being a Celtic today ☘️ pic.twitter.com/MotEIE13GO

When Robert Williams III turned down the chance to come out as a mid-lottery candidate in the 2017 NBA draft following his freshman season at Texas A&M, some predicted regret.

He ran the risk of a sub-par sophomore season and, well, what actually happened on June 21 when this young, explosive power forward slid all the way to the Celtics with the 27th pick.

Tondra Williams, momentarily unable to speak, shed proud tears while watching her son hold court in his first NBA media scrum. They all stood in a large room with broad windows that, on one side, overlooked the Mass Pike, with the length of the Boston skyline along the other.

Robert Jr. never felt more secure in that decision from just over a year ago.

“It wasn’t so much working on his game. It was his maturity level,” he said. “He wasn’t mature enough and I felt like he needed another year to grow and become a better young man. Decision-making was a priority, and I couldn’t be there every day. It was important that I had him go back for another year to mature, and it worked out.”

Mom and Dad always know best. Their 18- and 19-year-olds might think they have everything figured out, but they don’t. Young Rob III is fortunate he has loving but tough parents who steered him in the right direction.

The rookie appears to realize that now. He’s already gravitated toward the Celtics’ Team Dad.

Williams, too, expressed excitement about joining the Celtics. The 6-foot-10 forward said he’s eager to take in the “energy” and “wisdom” from teammates, the coaching staff, and the community. He specifically mentioned veteran forward Al Horford as a player he’ll likely turn to for guidance.

“I plan on looking at the best from Day 1,” he said. “Horford has had a great career. He eats right, works out right, does everything you need to do on a day-to-day situation, so I feel like me following in his every footstep will give me the keys to success.”

“What’s most interesting about his game is that Al doesn’t rush at all,” Williams continued. “He takes his time. Even if some people say his moves are too slow, they’re efficient. They work. His game, from dribble handoffs to how he’s coming off screens in attacking mode, it’s all beautiful. It all helps me prepare myself.”

Boston.com: What Robert Williams had to say in his introductory Celtics press conference

And after the rough start of missing a post-draft conference call last week, Williams has gotten the message.

The Celtics might have hammered home this whole “hard work” thing to Robert Williams. He referenced hard work at least seven times this morning.

"Boston is a place that loves hard work, and athletes who get it done. The city gets behind players with hard work, dedication."

CBS Boston: Robert Williams ‘All In’ With Celtics’ Culture

On Page 2: Big move unlikely in Boston, but L.A. story is different

“I feel great that we have a lot of players that people like and want,” said Ainge. “That’s a great feeling to have. It’s not always the case.

“And that’s the reason why we like our guys, too, is because we have a lot of talent on our team and we’re excited about our team going forward.”

How excited? Enough to think they could be playing next June with what’s on the roster now?

In that case, why even consider breaking up the gang in any way?

“Because if I feel like it’ll help our team, we explore every trade of certain magnitude or superstar first ballot Hall of Fame-type of players,” said Ainge. “We’re going to take a look and kick the tires and see if there’s something there, but that’s all. I think those things are unlikely.”

Unless you believe Danny is actually going to trade for Kawhi Leonard (I don’t), there’s very little drama around the Celtics roster moves this summer. Sure, there are some worries – it’s crucial to bring back free agents Aron Baynes and, especially, Marcus Smart. But whatever tension develops in that regard won’t nearly compare to trying to sign Horford and Hayward the past two years.

Instead, the worry this time is that the hated Lakers are going to get better. As Chuck spelled out yesterday, LeBron is probably on his way there. Paul George might be, too. And sooner or later – whether he’s traded there now or signs as a FA next year – Kawhi will probably also someday wear the purple and gold.

It’s true that many Celtics fans enjoy the Boston-LA rivalry, and would welcome the opportunity to beat the Lakers and LeBron at the same time. It sounds good in theory, but there are no guarantees. I prefer when the Lakers are irrelevant, with no chance of adding to their banner count. However, a LeBron/PG/Kawhi trio would give them the power to beat anyone, Warriors included.

Also, if you’re on Twitter, do you really want to deal with LeBron stans and Lakers fans as a combined force? No, thank you.

Another thing: for five years, Ainge has carried out a strategic and patient rebuild, which is coming to fruition now. A trip to the Finals is certainly a realistic goal for the current roster (especially if LeBron leaves the East). They might’ve gotten there already if not for the major injuries.

Compare that to the Lakers’ “plan”: be terrible, get several high draft picks, and wait for superstars to drop out of the sky because L.A. happens to be a great place to live when you’re young, rich and famous.

I was hoping LeBron would land in Houston, but since that is now unlikely, my best-case scenario is: Kawhi resolves his differences with the Spurs and signs a mega-contract to stay in San Antonio; PG decides to take the Thunder money and stay in OKC; and LeBron returns to Cleveland (where this time the Celtics will get past him). I have at least until midnight before Woj bursts this bubble.

P.S. If you’re a Lakers fan reading this for some unknown reason, relax. I already know you hate the Celtics.

NBC Sports Boston: Everyone has a theory about the Celtics’ trade interest in Kawhi Leonard

The Celtics meet the Sixers in the Las Vegas Summer League opener one week from today, Friday, July 6, at 7:30 Eastern Time on ESPN. Here’s the roster (announced yesterday) and an in-depth look at each player.

Boston.com: 22 thoughts we had while watching ‘Uncle Drew’