Your Morning Dump... Where Baynes is back... yeah, buddy! 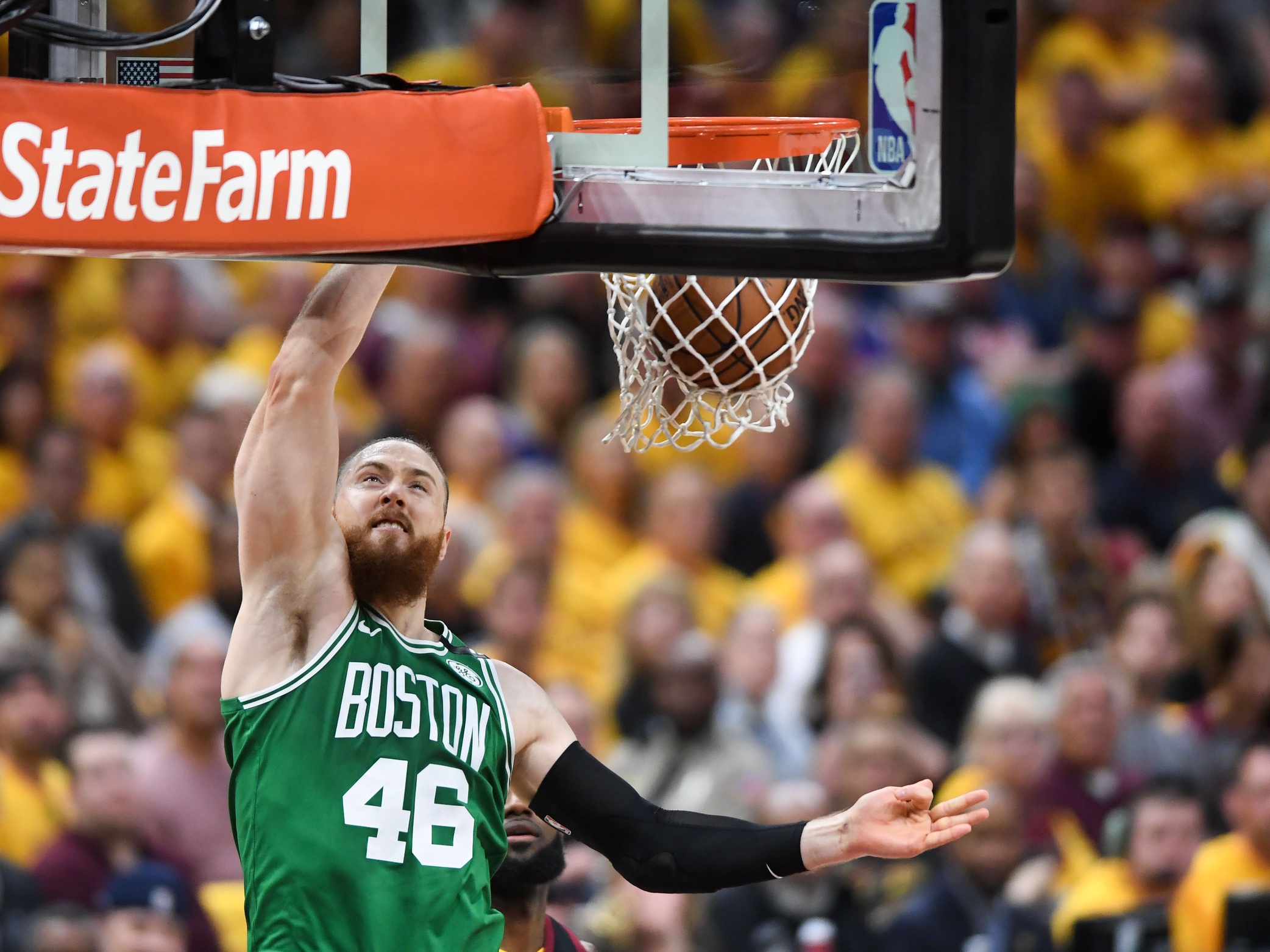 Your Morning Dump... Where Baynes is back... yeah, buddy!

Just after free agency opened at midnight on Sunday morning, the Celtics and Aron Baynes agreed to terms on a two-year, $11 million deal, according to a league source.

Yahoo Sports reported that the second year of the deal will be a player option for Baynes.

One thing worth mentioning with Baynes: His family grew pretty close to the Hayward and Theis families this year. All three have little kids and formed a real bond.

The moves makes total sense for Baynes, who turns 32 this season. He gets a couple of years in a situation tailored to fit his strengths, he has a chance to win a title, and his family likes it here with these Boston Celtics teammates.

As I’ve said before, Baynes returning keeps the emphasis on Boston’s top-rated defense. Brad Stevens has talked about how Baynes (along with Marcus Smart) challenges players on a regular basis.

Their energy is contagious, and it’s contagious every day. I tell the story all the time about (how) Aron Baynes races people in warmups. And he just brings an infectiousness that I can’t describe.

Now, the big question left to answer in Boston is… how does this affect Boston’s cap and tax situation? I’m going to borrow a handy chart from Ryan Bernadoni.

Williams is $1,654,320 and both Theis and Wanamaker count for the 2 year vet min for tax purposes because they weren't drafted. That accounts for about $1M of the difference. Not sure where the rest is coming from. pic.twitter.com/2KLGi0JIy8

Nader, Theis, and Ojeleye are non-guaranteed, but it’d be a major shock if they’re not back. Nader is as good as gone in my opinion, so that gives the Celtics $9,182, 835 to play with before they get taxed. That, to me, is the magic number for Marcus Smart.

If Smart takes his qualifying offer, then he’ll play for $6,053,719 this season and become an unrestricted free agent next season. In that scenario, the Celtics would stay under the tax and Smart would move into a more lucrative free agent market.

But if the Celtics want to keep Smart, are they going to offer him a multi-year deal starting at $9 million in the first year, or will they go higher and just become a taxpaying team?

An important note to remember, the Celtics can go into the season over the tax line but clear salary out later if they want because taxes are calculated at the end of the season. If the Celtics wanted to try to move Marcus Morris into, say, Atlanta’s cap space (which they would have to compensate Atlanta for with maybe a 2nd round pick), they could try to do so and move under the tax line.

That’s especially important to remember if you consider Smart to be a trade asset in a future move for a star like Kawhi Leonard or Anthony Davis. If Boston is still interested in pursuing a player like that, having Smart back on a deal in the $10-$12 million range really helps in a salary-matching situation. At that point the tax doesn’t really matter but Danny Ainge could structure the deal in a way that he sends out a little more salary than comes in and sneak back under the tax line.

It’s entirely possible that the Celtics ownership group doesn’t care about paying the tax this year. I’ve been operating under the assumption that putting it off one more season helps in the long-run because it pushes the repeater tax off one more season (I’ll show you why that’s important in a minute).

It’s possible they don’t care because the cap, and thus the tax line, is due to jump a couple of times in the next few years.

Remember, the heavily punitive repeater tax kicks in when a team has been a tax payer in three of the prior four seasons. If Boston pays the tax this year but avoids it next year or the year after, then it has the same desired effect of avoiding it this year. If they somehow can avoid paying it two years in a row, then they will find themselves in a much better position.

One way they can do that is by Al Horford opting out of his $30 million next summer and agreeing to a longer-term deal with Boston. The Celtics could offer him five years at a lower average annual salary, giving Horford long-term financial security while giving themselves tax relief. And because the “over 36” rule was recently changed to the “over 38 rule,” the Celtics are allowed to give him that kind of deal.

(side note: the cap spike in two seasons make my Marcus Smart 2-year deal scenario that I’ve been hammering even more sensible. Forget hitting the market next year the way everyone else is trying to do it… take two years in Boston, hit the market when the cap jumps to $116 million and try to take advantage of stupid GM’s who can’t handle having cap space)

This is all to say there might be a longer game in play here. The Celtics can give Baynes and Smart deals that bring them over the tax line but either (a) find a way to shed contracts over the course of the season or (b) not care because they have ways to get under the tax next season so the repeater tax isn’t looming as large down the line.

In the short-term, let’s just say welcome back to Aron Baynes and see how the rest of free agency plays out.

ESPN Boston: Sources: Baynes to stick with Celtics for 2 years

The deal includes a player option on the fourth year, the sources said.

Without taking any free-agency meetings, George made the announcement that he is staying with the Thunder at a house party in Oklahoma City hosted by Russell Westbrook, sources at the party confirmed.

George took to Instagram late Saturday to post a photo of himself with Westbrook, along with the caption, “Unfinished business.”

A: No one really expected him to go back to OKC. This was always supposed to be “LeBron and Paul George team up in LA”

B: Once word started circulating that a return to OKC was, in fact, possible, everyone expected it to be a 2-year deal so he could get his 10 years of service and set himself up for one more monster contract.

That neither A nor B happened is mind-blowing, which, if you watch this clip closely, you can see the exact moment Brian Windhorst’s brain breaks.

PG could have taken a two-year deal, come back on the market when the cap jumped to $116 million, and cashed in. He even could have done it with OKC if he was so committed there.

Instead, he signed this deal, which isn’t exactly chump change. He’s still going to be very rich. Maybe he was motivated by the longer-term security because of his past injury and he knows how fleeting health can be.

It’s wild to me that he never even gave the Lakers a meeting. I thought Magic Johnson was there specifically for the purpose of getting these guys in the door so they can be sold. I though Magic was there to charm guys into signing with the Lakers.

Paul George grew up outside of LA. He played his college ball in Fresno. He’s an LA kid and he didn’t even go listen to the Lakers pitch.

It’s a credit to Sam Presti, and the rest of the OKC players and staff that they did enough to convince Paul George to stay, even though they are going to be a super expensive team.

With Paul George and Jerami Grant on board, Oklahoma City now has a payroll of $156M with 11 players under contract. Because of the repeater tax penalty, the Thunder currently have a tax bill of $130M. The tax bill would be the largest in NBA history.

They can save money by buying out or stretching Carmelo Anthony’s contract, but that $130 million tax bill is the direct result of the repeater tax, so I hope you guys understand why we’re so bent on the Celtics trying to avoid it down the line.

Meanwhile, PG’s decision puts the entire course of this summer’s free agency into question. Does LeBron still leave the Cavs? Does he sign another 1+1 to stay in Cleveland? Will he go to Los Angeles regardless and hope they can either make a trade or add talent later on? Or will he…

For today's meeting, Sixers will meet with LeBron James' reps, sources tell ESPN. James will not attend this meeting. https://t.co/KJGS0xp5Yy

I’m not sold on LeBron to Philly, but who knows what could happen in a meeting.

Regardless, the dreams of a super team being built in LA have been dashed… at least for now. Even if they get LeBron and trade for Kawhi, any deal with San Antonio will gut the team to a point that puts intense pressure on both stars to carry a heavy load. There’s talk of them pursuing DeMarcus Cousins, but who knows what he’ll be after the Achilles injury. Even so, that team is not getting past Golden State. It might not get past Houston, either… though Houston just took a hit too.

Ariza played 67 games for the Houston Rockets last season. He averaged 11.7 points last season for Houston, and the 33-year-old will likely be looked upon as a veteran presence in a young Phoenix locker room.

I thought Houston would do all it could to keep him. They have no real way of replacing him, so they’re going to need someone else to step up. Meanwhile, they committed max money to Chris Paul.

By losing Trevor Ariza, the Houston Rockets are worse today than they were yesterday, and they’re going to be paying Chris Paul $44 million when he’s 37 years old. Doesn’t seem ideal.

Provided LeBron doesn’t go to Philly, this is all good news for Boston. We’ll have to wait to see what Golden State does and whether they get to bolster an already awesome team, but in the meantime the path for the Celtics remains fairly clear.

Bird showed nice flashes last season in his few opportunities, and he can certainly get an opportunity for more playing time somewhere else. As much as I like him and hope he could stay and develop in Boston, I don’t think there’s a realistic way to keep him if he’s offered a deal somewhere else.

Herald: It begins: Free agency in NBA starts with a flourish  |  Lot to learn, experience for young Celtics during summer in Vegas  |  Bulpett: As NBA free agency begins, Celtics must do no harm