LeBron James Preserved His Legacy in Decision to Sign with Lakers

LeBron James Preserved His Legacy in Decision to Sign with Lakers

What do names like Michael Jordan, Bill Russell, Kobe Bryant, and Kareem Abdul-Jabbar all have in common?

For starters these are some of the biggest names in all of basketball history. These athletes helped the sport evolve and grow in unique ways at different periods of time. Each left their mark on the game and found a way to leave the NBA in a better state than when they found it.

All of these inspirational athletes have not only been debated as the best talent of their time, but perhaps of all time. Each have achieved the ultimate goal every individual that steps foot on the basketball court desires. A championship banner. A finals MVP. The Larry O’Brien trophy.

In 2003 a young kid from Akron Ohio submitted his name into the NBA Draft. LeBron James had dreamt from a young age to be amongst the best the NBA has ever seen. He was 18 years old and had only just graduated high school. Fifteen years later “The King” continues to leave his mark on the league. His dominant do it all play style has cemented him as the most unstoppable force of his time. With career averages of 27.2 points, 7.4 rebounds, and 7.2 assists per game his raw numbers speak for themselves.

LeBron has bullied his way into the conversation as the greatest to ever step foot on a basketball court.

The only accolade holding him back is his NBA Finals record.

LeBron has appeared in 8 out of the last 9 Finals. He has played in 9 championship series. Out of these appearances James has come away with just 3 rings.

His 3-6 record on the biggest stage is the major roadblock keeping him from taking the crown as the best to ever play. Championship rings have always been of utmost importance when debating who really is the greatest. MJ went 6-6. Kobe accomplished 5 championships in 6 tries. Russell holds 11 titles. Kareem went to 10 as a payer and won 6, then added 2 more as a coach. These iconic NBA icons all share in common great success on the biggest stage under the brightest lights.

For the sake of LeBron’s legacy he simply cannot afford to lose another championship. The more he loses the more challenging it will become for his name to be slotted next to the NBA’s elite.

As much as he has tortured the league in his career, the Golden State Warriors have risen to the challenge and assembled arguably the greatest roster of all time. A roster LeBron has struggled mightily against the past few seasons. After being swept out of the Finals in 2018 it marked his 3rd Championship loss in four tries against the Dubs.

Something had to change. 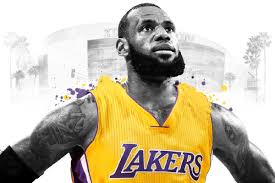 On July 1st LeBron made his 3rd free agency decision of his career when he agreed to sign a 4 year deal with the Los Angeles Lakers. This contract gets James out of the Eastern Conference and onto a team that is several moves away from competing.

So why would LeBron leave the Eastern Conference? He had just finished up polishing off that half of the league for the 8th straight season.

The only logical reason is to avoid the Warriors in the Finals for good. Being in the West allows James to go toe to toe with the likes of Golden State without the risk of hurting his Finals record. He has four years to do what he can to get another ring. Only now if he fails he doesn’t add another loss to his already poor 3-6 record.

LeBron James still has a chance to save his legacy and lock in his spot as the greatest to ever play. He just made a brilliant move. Now the world will wait and see if The King can seal the deal.