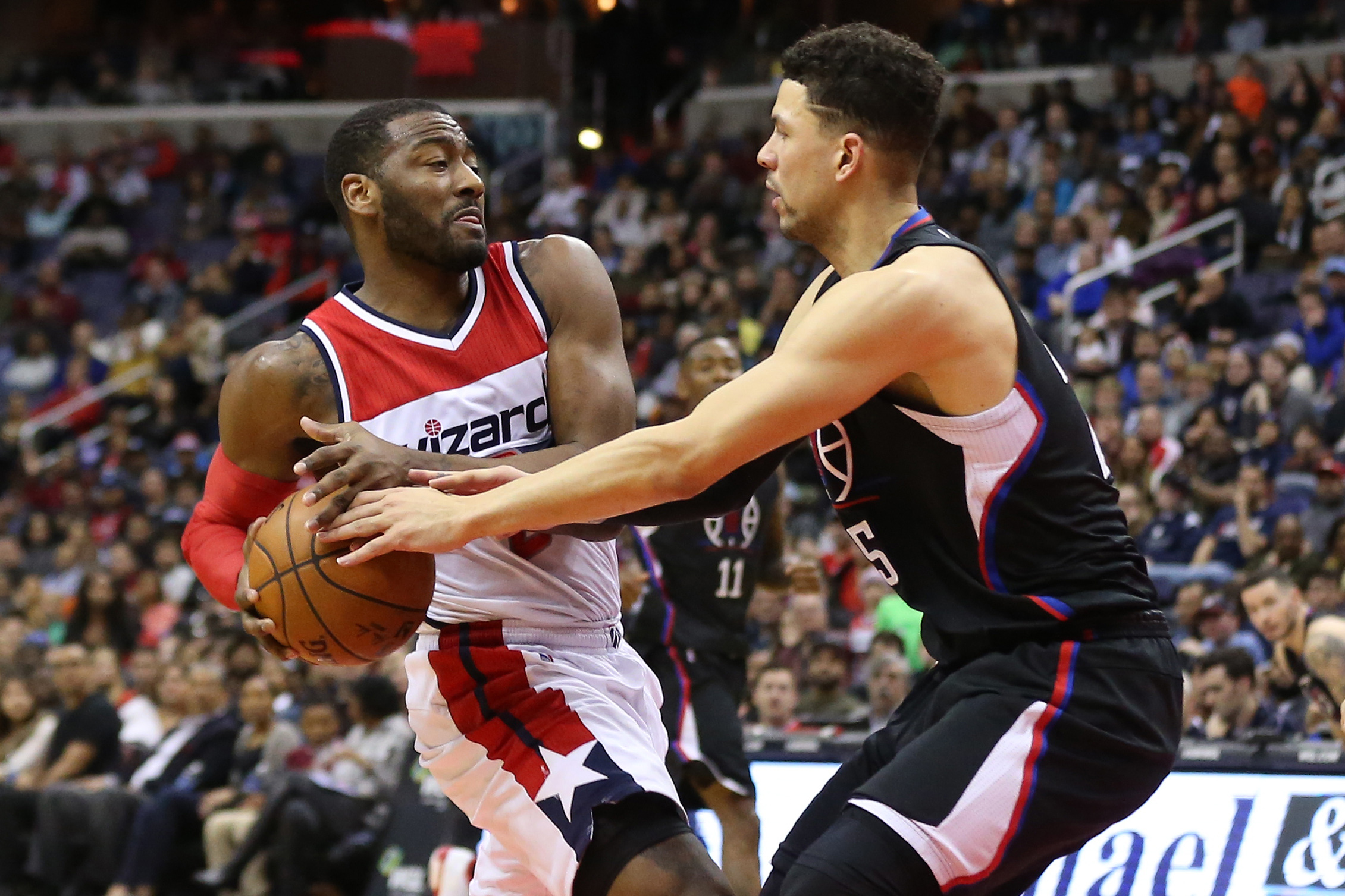 Getting traded is never easy and that goes two-fold for Austin Rivers as he leaves the team where he was able to be coached by his father, Doc, but the Washington Wizards provide a nice situation for the guard. With his brother, Jeremiah, having played at Georgetown, Austin knows a little bit about the city and always enjoyed playing in D.C. as a visitor because of the boutique shops and Four Seasons hotel. His fiancé is also a big fan of Washington because of her love for museums. Many arrangements, like finding a place to live, are still to be dealt with ahead of the birth of their son Kaden James ‘K.J.’ Rivers in August, but Rivers is eager to fit in.

“Very excited to be here,” Rivers shared in an impromptu opening statement. “This is definitely one of the teams that I’ve been looking for when the trade happened, I was happy to see that it was D.C. This is a team that I’ve watched closely over the years. It’s nice to be going to a team where I have a lot of familiar faces. … The age on the team, for the most part, of the players is similar to mine. We all kind of grew up playing with each other or against each other so it’s like old AAU team kinda of being together. It’s pretty cool. I love their style of play. I’ve never been coached by Scotty, but everything that everybody has said about Scott Brooks is that he’s a heck of a coach and lets his guys go, but demands they compete, which is something I plan on bringing here. I’m just happy to be here, I’m very thankful, very grateful and look forward to just competing every night and trying to help this team win in any way I can. … More importantly though, just being on a playoff team, that’s the most fun thing. Not making the playoffs this year was horrendous. Just sitting here on this couch watching these guys compete, that’s the only thing that matters is being a player at that level. Just being on a playoff team is very exciting.”

Coincidentally, Rivers and John Wall, who knew each other somewhat before, got closer in the weeks before the trade because they both had body training appointments in Miami right after each other. This gave them a chance to get to know each other better in a relaxed manner. (My conspiracy take is that this was a job interview for Rivers before the Wizards pulled the trigger on acquiring him.)

“That’s why it was so crazy when I got traded here,” Rivers reflected on having hung out with Wall in the days leading up to the trade. “His [body] session was right after mine. I’d be in at 1 p.m., he would come in at 2. That is you just sit there and talk for 20, 30 minutes every day. Go hang out or get something to eat or whatever. I’ve always known John, but we got a lot closer over the past couple weeks just because I was down there. Our personalities align a little bit, too. It was good and then the trade happens and he texts me, ‘this is crazy.’ Everything happens, I guess, for a reason.”

“We were never talking about me and him playing together,” Rivers explained. “He was just talking about the season and he would just say this is what we struggled with, this is what we needed to do. These are things that we would talk about. I’d tell him my own stuff because that’s all players do in the summer is just talk about B.S. and stuff whatever. It happened so quickly and then after he just sent me a text just laughing like, ‘this is crazy’ and now ‘welcome to the squad.'”

Rivers also knows Bradley Beal as they were the No. 10 and 3 overall picks in the 2012 NBA draft and matched up in the AAU circuit as well. It would make sense for most of Rivers’ minutes to come from backing up Beal, but Washington has already spewed the versatile card all over the 25-year old as they think he can play 1, 2, and 3. Rivers was incredibly complimentary on his new teammate and they can soon bond over being new fathers to baby boys soon enough.

“I’m excited to play with Brad, too,” Rivers said. “Growing up playing against Brad in the AAU. We always had a little thing going against each other. I could see, everybody could see how special he was going to be in high school with his body and his shooting ability. I knew it was only a matter of time before he would be an elite two-guard and that’s exactly what he became.”

Being in a contract year and being a skilled isolation player, some might question the fit for Rivers and the Wizards since they have two established guards ahead of him in the rotation as he might be looking to put up flashy stats in hopes of a new contract. That could not be further from the case as the polished young man is all about the team (or he has the best poker face ever) by explaining that he knows his role (which Wall complained about others on his team not knowing during his exit interview).

“For me, it’s just not to focus on me,” Rivers shared. “And that’s [focusing on himself] what I’m not doing. I’m not even focused on ‘John and Brad are going to get the ball most of the time.’ Yeah, they should, they’re All-Stars. For me, it’s coming in and doing whatever they need me to do. For me being a scorer and playmaker is only going to help them if anything. They don’t have to do so much all the time. Fourth quarter, they are not going to be worn down. They are going to have a little bit of extra energy because I can help out. … I think it’s harder to guard when you have three guys attacking you on all three sides of the court. It will be difficult to guard.”

Rivers is also excited to play with Otto Porter Jr. as well as Kelly Oubre Jr., the latter of whom he has already texted with back and forth. The Duke product also knows Jason Smith from their New Orleans Pelicans days and commends him for being a “class act, good dude,” which we know to be true. The newest Wizard will meet up with some of his new teammates, including Wall, in Las Vegas as Washington begins Summer League on Friday and he is excited to start meshing.

“I want to be there whenever the guys are going just so I can be around them,” Rivers explained his sponge-like game plan. “That’s just when you get comfortable, workout, whatever you want to do, hang out. Whatever they want to do, I’m down. I’m sure there we’re going to get an idea of what he feels and what he thinks and what him and Brad and all the other guys here because obviously, I’m the new guy here so I’m coming in to not only add what I do, but to fit into what they do most importantly.”