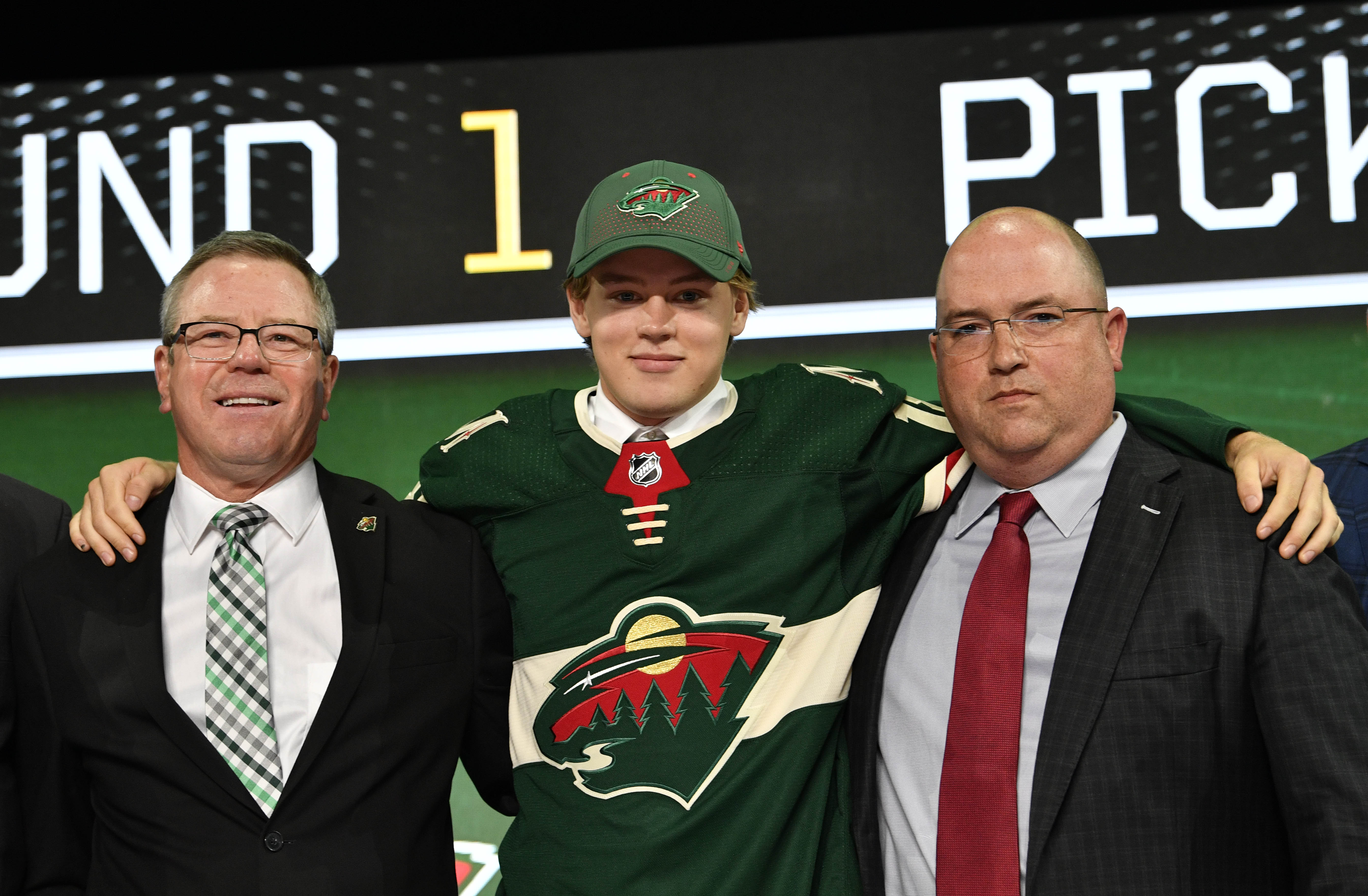 Since the NHL Entry Draft, teams across the league have been calling in their prospects to be put through their paces at camps.  For those players just drafted by the team a few weeks before or given their first camp invite it is their first taste of the expectations at the game’s highest level.  From nutrition classes, off-ice strength, social media training and conditioning drills as well as plenty of on-ice instruction its almost like a crash course in how to be a professional hockey player.

For invitees and drafted players alike, its a chance to show team officials and coaches what you can do and how you stack up compared to the other players that are at development camp.  If the player is attending camp for a 2nd or 3rd time, it’s an opportunity to show how much you have improved from previous years.  It is also a chance to earn a professional contract, especially if you are an invitee.  Justin Fontaine, Jared Spurgeon, Dereck Baribeau and Brennan Menell are all players who earned a contract after being an invitee to Prospect Development Camp.  I interviewed Brennan Menell last year just before the team signed him to entry level contract and his story is a good one for any invitee to just about any hockey prospect camp to hear.

For die hard Wild fans or people just looking for a hockey fix in the summer time a chance to go to a prospect scrimmage is a terrific opportunity to see the future of the organization.  Many fans make it an annual event and watch the prospects with a critical eye; observing what players look stronger or maybe a step quicker than the year before.

Fans have the chance to watch practice or attend one of the two scrimmages.  The complete roster can be seen here.  Players will be divided between two teams; Green / White and the open practice times will be on the following dates and times and will be held at the team’s new practice facility while the team scrimmages will be held at Xcel Energy Center.

Who are some players to watch for?

#49 LW – Connor Dewar (Everett, WHL) ~ the team’s 3rd round pick from this season is a hard working, ball of energy on the ice.  He pressures the puck well and has an excellent scoring instincts.  I would be watching closely to see his speed, quickness and hands to see if he’s a standout during the team scrimmages.

#54 RW – Ivan Lodnia (Erie, OHL) ~ the team signed Lodnia after another solid season for Erie.  Lodnia had a great 1st half of the season but kind of flatlined in the 2nd half.  The Wild’s top pick a season ago, it will be interesting to see if he is more assertive than he was last year.

#56 C – Mason Jobst (Ohio State, Big 10) ~ An invitee who was a big scorer in the Big 10, he brings plenty of speed, skill and scoring ability.  Only knock is he’s pretty small.  He is older than most of the other prospects at the camp, but would he demonstrate he’s worthy of a deal to provide some scoring punch for Iowa?

#57 C – Jack McBain (Toronto, OJHL) ~ The soon to be Boston College Eagle will have a chance to showcase his size and skill to Minnesota for the first time.  I would keep a close eye on his skating, especially to see if he has the acceleration to gain a step on defenders.

#58 C – Mason Shaw (Iowa, AHL) ~ a knee injury sustained at the Traverse City Tournament last season had the speedy forward spend almost the entire season rehabbing as he only played one game for Iowa last year.  The team still saw enough at Traverse City and Prospect Development Camp to sign him to an entry level contract.  Shaw is a lot like Dewar, a smallish, water-bug like player who forces turnovers through relentless puck pressure and scores goals on sheer effort.  He was a standout at camp last year, can he do it again after blowing out two ligaments in his knee?

#74 RW – Dmitri Sokolov (Niagara, OHL) ~ the biggest thing I’ll be looking for from Sokolov is to see how in shape he appears to be in his shifts.  The team signed him to a contract, but no doubt they talked to him about his conditioning level.  There is no doubt he has a great shot, but if he looks like he’s winded or struggling to keep up in his shifts would not be a good sign.

#77 RW – Nick Swaney (Minnesota-Duluth, NCHC) ~ The freshman surprised many with a strong season with the Bulldogs.  He has a terrific knack for being in the right place at the right time for the puck.  Swaney had 11 shots on goal in the national championship game against Notre Dame, will he pile up the chances in the scrimmages too?

#42 D – Simon Johansson (Djugardens Jr., Swe. Jr.) ~ the big shooting defenseman was perhaps the most intriguing selection the Wild made at the 2018 NHL Entry Draft.  Will we see that big right-shot cannon on display at the scrimmages, I certainly hope so!

#59 D – Filip Johansson (Leksand, Swe. Jr.) ~ the Wild’s top pick from this summer’s draft, his selection didn’t exactly ‘wow’ many fans.  A player who gets lauded for playing a smart, safe game it will be interesting if he gives fans at the scrimmages something to marvel over or will he be as bland as his game sounds.

#61 D – Brennan Menell (Iowa, AHL) ~ I would expect the only defenseman to play in Iowa to appear more polished than most of the prospects at the camp.  He is another right-shot defenseman who plays a two-way game but I would expect him to dominate.

#80 D – Niko Seppala (HIFK Jr., Fin. Jr.) ~ the skilled defenseman was a big scorer this season in Finnish junior.  Can the invitee turn some heads with a strong camp?

#93 Hunter Shepard (Minnesota-Duluth, NCHC) ~ Coming off a national championship, the former Grand Rapids star should be in fine form.  A bit undersized by NHL goaltending standards, he moves well in his crease and will he show the potential to earn a professional contract from the Wild?

#94 Kaapo Kahkonen (Lukko Rauma, Sm-Liiga) ~ the recently signed prospect goaltender had a good season in Finland’s top league and will be making his way to North America this fall.  Kahkonen will be battling for the starting role in Iowa this season, I would expect him to be the most polished of the 4 goaltenders at camp this year.

What prospects or invitees intrigue you the most?  Tell us on Twitter @CreaseAndAssist or in the comment section below!