Your Morning Dump... Where regardless of where Kawhi goes, the Cs starting 5 will be in Boston 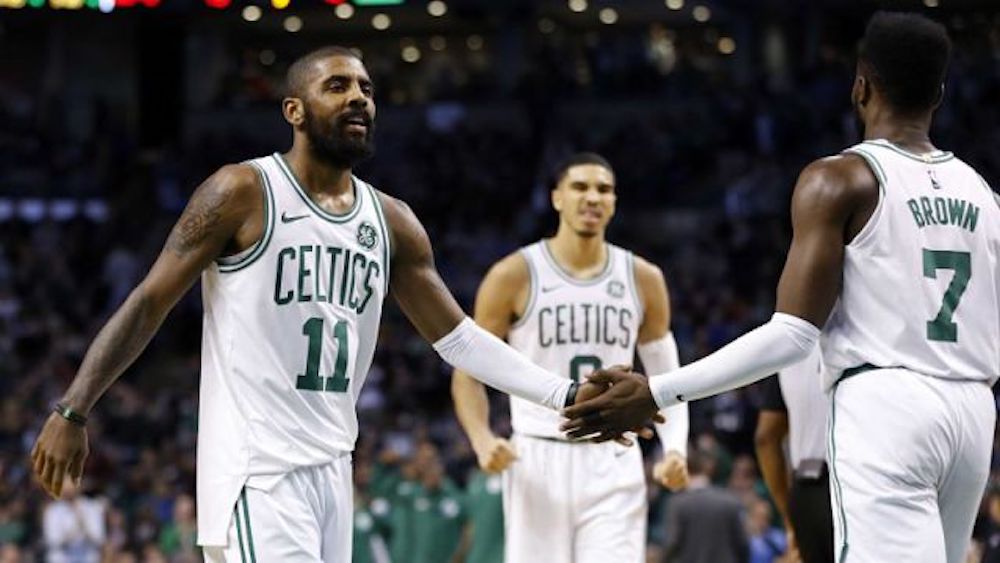 Your Morning Dump... Where regardless of where Kawhi goes, the Cs starting 5 will be in Boston

During a segment on ESPN’s Sportscenter Tuesday, Adrian Wojnarowski reported that the Celtics are keeping their top five players “off limits” in trade discussions for Kawhi Leonard.

Exactly who those top five players are was not specified, but it’s safe to assume Woj was referring to Kyrie Irving, Gordon Hayward, Al Horford, Jayson Tatum and Jaylen Brown.

Leonard reportedly asked to be traded by the Spurs in mid-June, and the Celtics are one of their preferred trade partners due to their wealth of draft picks and talented young players.

Woj included how the Celtics want to complete a trade including mostly draft picks, while the Spurs want talented players coming back in a trade. San Antonio is not interested in a full rebuild.

It’s really difficult to definitively say what the Celtics should or should not give up for Kawhi Leonard. The feeling across most of Boston is not to give up anything of value for Leonard, since he can and seemingly will leave after next season, hasn’t played much NBA basketball in a year, appears to be mercurial and a bit of a brooder, and because as fans, we love our young guys and maybe even overvalue some of them.

On the other hand, remember Kawhi Leonard? He’s on Steph and KD and James Harden and Anthony Davis’ level as a foundational superstar. Those don’t come along every day.

The middle ground is what Woj reports — the Celtics would love to have a guy like Leonard on the team, but not for anyone who really matters. In most situations, a report saying “a team won’t trade its top five guys” comes off as obnoxious, the type of bombastic claim made early in trade negotiations. But you get the sense the Celtics mean it. There is no scenario in which they trade any one of those guys to get Leonard, which probably means he’s going somewhere else.

Bobby Marks and Kevin Pelton wrote about the Leonard sitch a few days ago and pontificated about a surprise team getting involved. At some point the Spurs are going to say “fu*k it” and dish Kawhi somewhere for a combination of young guys and picks. Is there a team we aren’t thinking of that’s going to swoop in?

His much-anticipated return is one of the primary reasons the Celtics are considered favorites in the Eastern Conference. He recently began running again after a follow-up procedure removed the screws and hardware in his ankle to relieve tendon discomfort.

The on-court validation of a journey that began a year ago today waits just around the corner.

“He’s doing great,” Bartelstein said. “He works out three times a day. He’s so committed. I can’t imagine anyone could have a greater work ethic than Gordon Hayward, that’s for sure. His entire life revolves around working out and getting better. He’s doing really well. I think it will be an extremely emotional moment to get back out on the floor, no doubt about that.”

So much has happened since July 4th of 2017. My wife didn’t leave me for spending all of that day at the beach refreshing twitter to sift through Gordon Hayward rumors (she survived Durant/Horford free agency, too, thanks Danny for making this off-season easy so far. Not sure we could have survived another), Gordon Hayward’s Celtics career started and halted within 10 minutes of each other, and now we find ourselves back in the same spot we were last July — anticipating.

As the off-season continues to slow (save for some imminent Marcus Smart news, good or bad), I’m sure we’ll be covering more of Hayward’s return to basketball activities.

In this case, reports are coming from his agent, so take them with a grain of salt, but all indications from all parties seem hopeful.

I don’t know about all of you, but I’m in the same headspace I was when game seven concluded — can we just get to mid-October already?

I’m more interested in Jaylen’s obsession with fanny packs than I am about Jimmy Butler’s presence. It’s cool that Brown is buds with a couple of NBA old-heads, and appropriate from a timing perspective given the Chicago Sun-Times report about Butler and Irving.

Maybe just before this photo was snapped, Brown whispered “hey Jimmy, get the hell away from my point guard.”

Also, after this photo was snapped, Butler asked to lie down. He’s still fatigued from Thibs playing him 48 minutes a night, every night from October to April.

BostonSportsJournal — Celtics miss out on DeMarcus Cousins, but being in mix shows their growing appeal