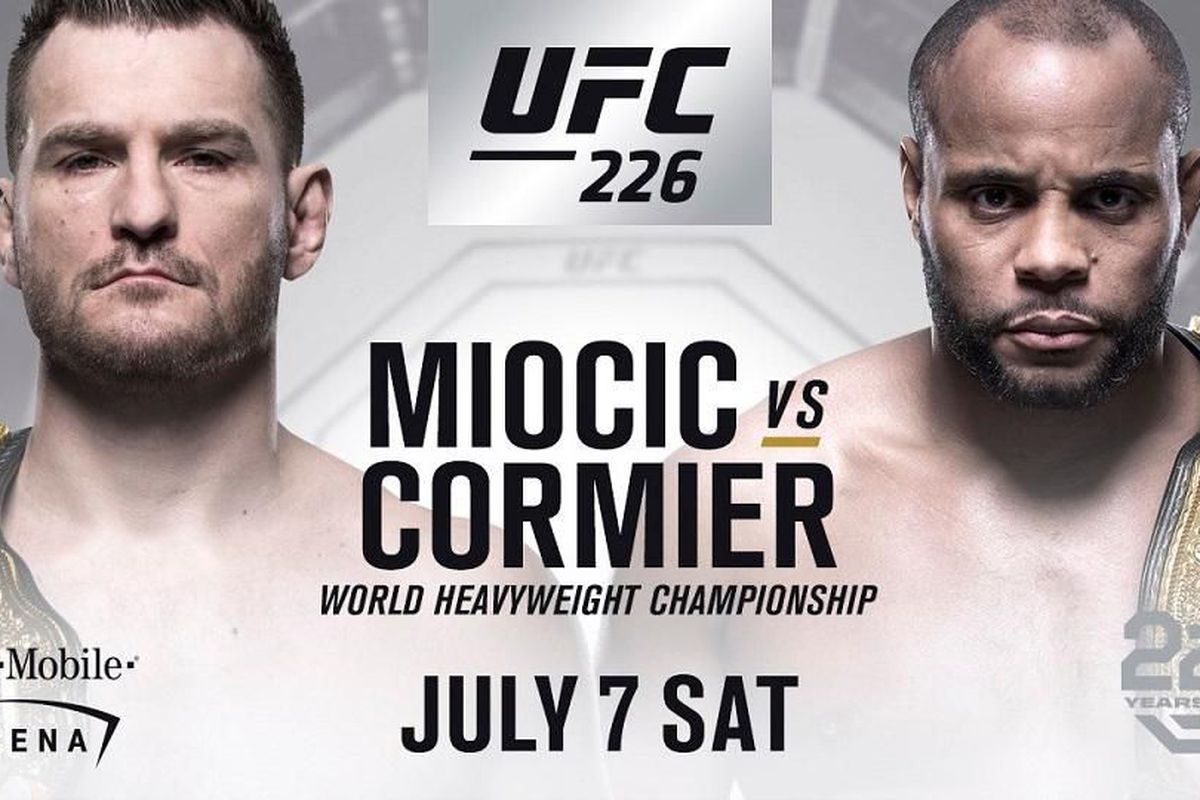 Nolan: Probably the closest the UFC can come to a “superfight” these days, it comes with a heavyweight champion in his prime in Miocic taking on the light heavyweight champion who is closer to his twilight than his peak in Cormier. Against Miocic, Cormier will be at a size disadvantage regardless of the weigh-in as Miocic’s height and eight-inch reach advantage should keep him from getting bullied inside by Cormier, in addition to being used to fighting with the heavyweight frame compared to Cormier’s nearly five-year absence from the division.

Much like in the Jones fight. Cormier will have to survive on the feet in order to get the takedown. Cormier is great at using looping strikes to set up his bread and butter, but he will be punching from way back and have to make up the distance against a really solid MMA wrestler with some amateur training in his past. Additionally, it will be pressuring for takedowns against a heavyweight and Cormier could have a very different gas tank in his heavyweight return. Meanwhile, Miocic is the sharper striker of the two technically with his boxing and it will be up to Cormier to somehow find his way to engaging Miocic inside without getting clipped.

Add to this the slightly more aged Cormier at 39 to Miocic’s 35, the wear and tear of a life in amateur wrestling, and the brutal training techniques at American Kickboxing Academy, it just gets hard to pick Cormier barring a wrestling clinic. Miocic keeps him away and wears him down on the feet until he gets the stoppage. Stipe Miocic by third-round TKO.

Nolan: In a battle of two power strikers, Ngannou has simply beaten better strikers on the feet than Lewis, knocking out the likes of Overeem and Arlovski, while surviving Miocic in a close decision loss. Lewis has been battling a bad back as of late and is the slower, more plodding striker that doesn’t necessarily have the one-punch knockout power that Ngannou has and generally scores a winning punch after waiting out his opponent for a few rounds and scoring volumes of damage. That isn’t a luxury that many, if any fighters can afford on the feet with Ngannou. Francis Ngannou by first-round KO.

Nolan: It is hard to peg a fighter as enigmatic as Pettis has been as of late, but as a fighter who relies on distance to set up his kicks, it is hard to imagine him keeping away from the pressure of Chiesa for that long. Chiesa isn’t a slouch power-wise with the hands either and there is always the possibility he clips Pettis coming in or vice versa really. Should Chiesa be able to avoid any mistakes due to his rather primitive striking style and keep Pettis on the cage for a takedown, his power grappling should be good enough to survive the dangerous guard of Pettis if he doesn’t get too loose on the mat. Michael Chiesa by unanimous decision.

Nolan: Rountree could very well blitz Saki with takedowns throughout and has shown the power to do so. However, despite the grappling advantaged assumed, Rountree has always been a more raw striker that relies on pressure and power and that sort of bread and butter will always put you in danger against a more technical striker, much less a world class kickboxer like Saki was in his combat sports past life. It will take one mistake coming in for Rountree and Saki will take advantage of it. Gokhan Saki by first-round KO.

Nolan: It all depends on what Hall shows up, but Costa has faced and knocked out similarly powerful strikers in the likes of Johny Hendricks. Costa shouldn’t give Hall any time to get started and spaced before coming in with something to end the fight. Paulo Costa by first-round TKO.

Nolan: While Perry is the more dangerous of the two strikers in the power department, Felder isn’t lacking there and is the more technical of the two. Perry is prone to get sloppy chasing for a knockout and Felder should be able to pick him apart throughout. Paul Felder by unanimous decision.

Nolan: Getting through the reach of Font could spell some trouble for Assuncao, but it is hard to pick against him in any fight other than the top bantamweights in the world so his grappling should carry him through. Raphael Assuncao by unanimous decision.

Nolan: Griffin is a guy who is up for a brawl and Millender has the power to oblige, but I think Millender has the more well-rounded game and you can always count on that over a game, tough fighter. Curtis Millender by unanimous decision.

Nolan: Burns is getting competent on the feet and that should allow him to survive and get the fight where he needs if he doesn’t fall into a lull on the feet. Gilbert Burns by second-round submission.