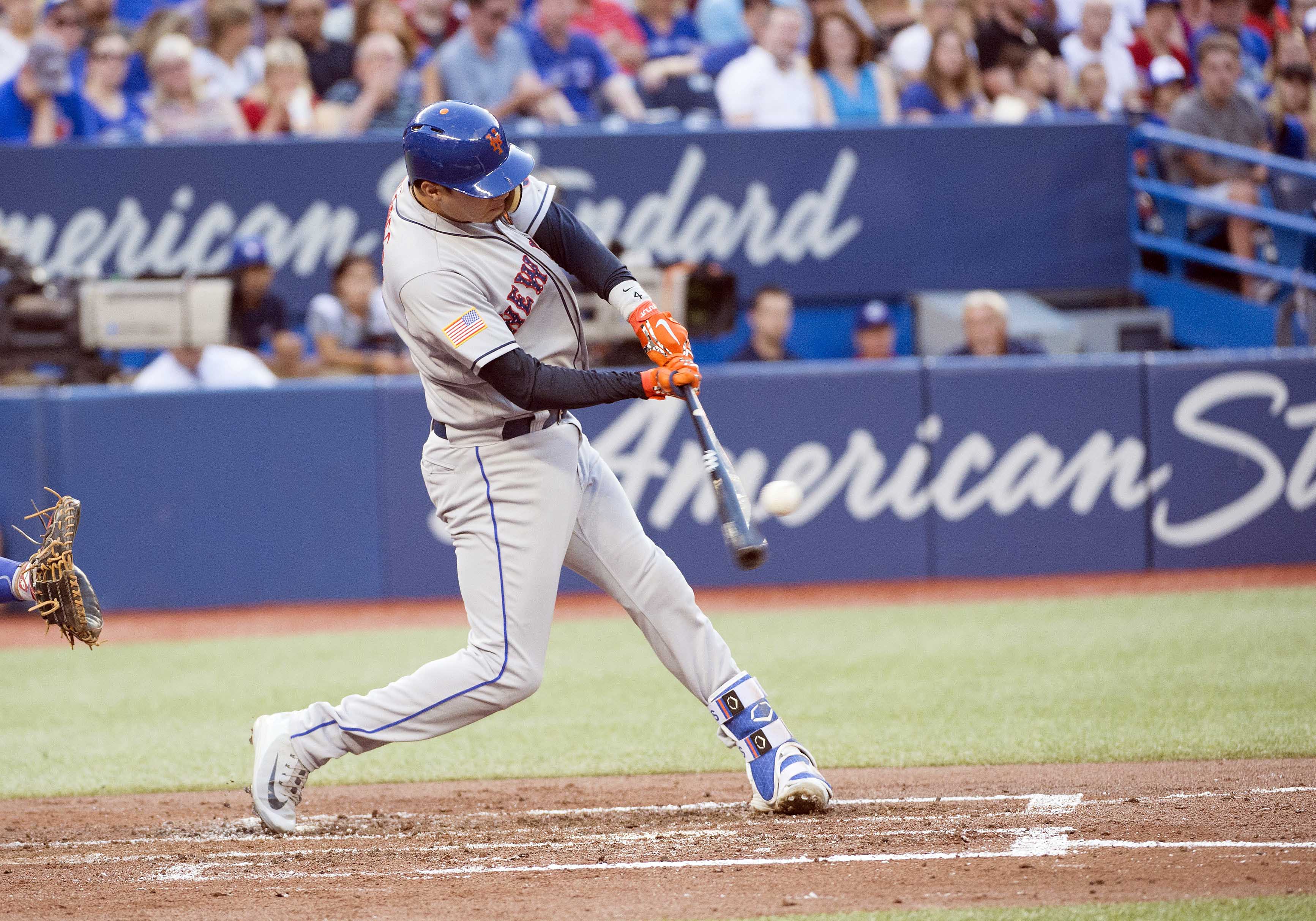 One of the big questions facing the three headed GM machine of Omar Minaya, John Ricco, and J.P. Ricciardi is how to try and liquidate some of the New York Mets’ assets to get the kind of young talent that the franchise desperately needs. The Mets will obviously try and deal off their veteran players on expiring contracts, like Jeurys Familia and Asdrubal Cabrera, but they aren’t going to get a ton of value for them. Apart from doing a mega deal involving Jacob deGrom or Noah Syndergaard, the only way for the Mets to really extract any value is to try and ship out players with team control remaining to address other need areas. One guy who could fit that mold is infielder Wilmer Flores, who has been on a hot streak of late.

Since coming back from the disabled list in mid-June, Flores has been raking at the plate, hitting .295 with four homers and 14 RBI’s in 61 at bats. Flores has gotten the bulk of the playing time at first base since the Mets cut Adrian Gonzalez and has thrived in the middle of the batting order, one of the few players to actually produce while the team’s season has gone south. It’s important to remember that Flores was the team’s best hitting prospect back in 2013, but he hasn’t really had a chance to play every day since the Mets added Asdrubal Cabrera prior to the 2016 season. Flores has been limited to a platoon role for the majority of the time due to his ability to crush left handed pitching, but he has shown in more regular at bats when the team has fallen out of the race that he can be an effective major league player.

The problem for the Mets with Flores is that they don’t really have a place they feel confident in playing him defensively. Flores was the Mets’ shortstop for a lot of 2015, but his defensive issues caused the Mets to move him off the position. The Mets have Todd Frazier at Flores’ natural position of third, so that’s out, leaving only second and first available to him. Second base should open once the Mets trade Cabrera, but they are expected to use that spot to look at Jeff McNeil, who has been a revelation in the minors this year. That leaves first base, where Flores has looked comfortable but also one of the few places where the Mets have young prospects that are close to big league ready in Dominic Smith and Peter Alonso. Smith has been getting some reps in left field while Jay Bruce is on the DL, but that isn’t a long term solution. Alonso looks to be the long term answer at the position, so now Flores is essentially playing the role of Gonzalez for the Mets, holding up the position and keeping the Mets from evaluating the younger guys they have.

The difference between Flores and Gonzalez, however, is that Flores will have trade value due to his ability to hit. Flores could be particularly valuable to an American League team since he can be used as a designated hitter, hiding his poor defense while allowing him to shine at the plate. The Mets used Flores as the DH in Toronto this week, where he went 3 for 8 with a double, home run, and two runs scored. That should continue when the Mets go to Yankee Stadium after the All Star Break, allowing them to use Flores as the DH again and continue to build his trade value.

Flores is only 26 years old, so he has room to improve, but he is only under team control through the end of next season. With free agency looming after 2019, the Mets need to decide if they want to commit to Flores now or shop him while his value is peaking to try and get a prospect in another area of need. Flores, who infamously was in tears after a reported trade that would have sent him to the Milwaukee Brewers fell through, has made it clear he wants to stay with the only organization he has ever known, Mike Puma of the New York Post reports. Playing Flores ahead of Smith doesn’t make a ton of sense unless you are showcasing Flores for a potential trade, which is a strong possibility with the Mets needing to get creative to acquire young talent. If the Mets are planning to hold deGrom and Syndergaard for now, they need to be willing to part with other talent that teams have interest in to improve their situation. Flores fits the bill, and it wouldn’t be surprising to see him land somewhere else prior to July 31st.