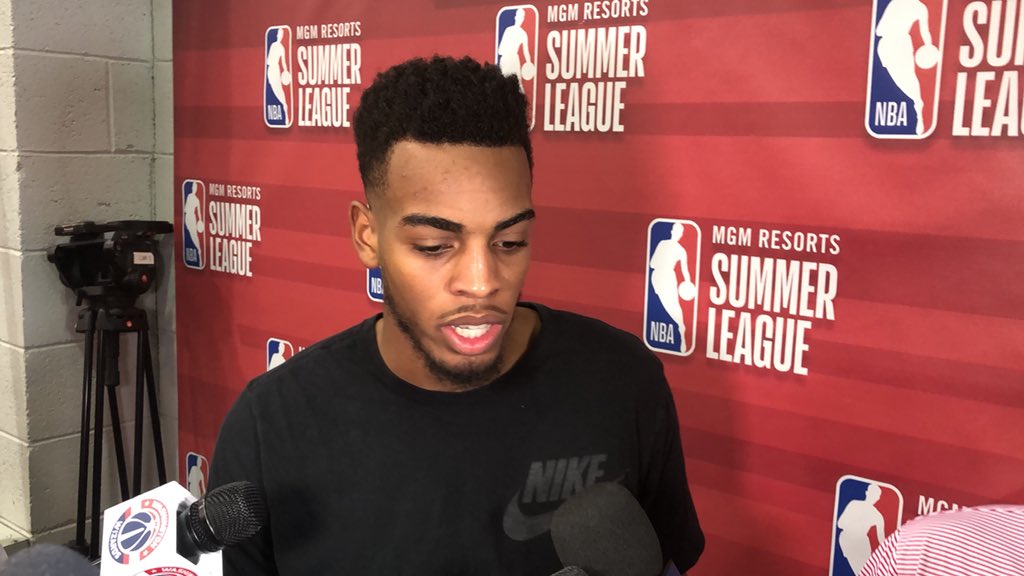 LAS VEGAS — Summer League serves two purposes: young players getting the opportunity to display their talents to all 30 teams and to learn from their mistakes prior to training camp. The Washington Wizards did both of those as they were destroyed by the Cleveland Cavaliers, 72-59, in their first game of the session.

The Wizards’ could only blame themselves for their dismal performance as they only knocked down five of their 30 three-point attempts. They were a dismal 20-for-67 from the field, shooting 29.9 percent. Couple the poor shooting with getting outrebounded, 38-29, and turning the ball over 25 times meant Washington never had a chance.

“I mean, it was just basketball,” rookie Troy Brown Jr. said. “I feel like sometimes during the game, I sped myself up trying to make plays. That’s where I feel like a lot of the turnovers came from.”

Troy Brown on the speed of the game:

“I mean it was just basketball.”

Brown admitted that at times he sped up a little which caused self-inflicted mistakes such as turnovers pic.twitter.com/ECHgIt3pH4

The first round pick finished the night with 13 points on 6-for-14 shooting from the field and missed both of his attempts from behind the arc. On the bright side, Brown was very aggressive throughout the entire game by driving to the paint to create shots for himself and his teammates, too.

“For me, it’s more about being able to get in the paint. When you get in the paint a lot of things can happen. You can make plays for teammates, or you can score. So, I feel like it’s a lot of different options. For me to get downhill that helps a lot, just in my game to be able to make plays and score,” Brown said.

Troy Brown Jr. on his aggressiveness:

Though the Wizards made their errors throughout the game, they are taking it as a learning experience. Recently claimed off waivers Thomas Bryant was held to just seven points in 27 minutes of play, but explained everyone is still getting adjusted.

“Just us gelling together,” Bryant shared. “It’s our first official game out there playing with each other. Things are not going to be perfect. Just learn different things that each guy likes to do.”

The former Lakers center also mentioned a part of the process of being a young new team is learning how to communicate amongst each other so the team can be successful on both sides of the ball.

Thomas Bryant talks about playing with John and Brad and what he brings to the team.

Additionally, he spoke about what he liked about Troy Brown JR’s game.

“I love that he was aggressive. He came out aggressive and didn’t play timid or anything.” pic.twitter.com/N0teNg55vu

Two-way player Devin Robinson led the team with 14 points, but he too struggled from the field. The lanky forward finished the night shooting 4-for-11 from the field and also missing both his shots from downtown.

In the end, Washington’s Summer League team will have a lot to study from at their film session tomorrow. Overall, the effort was good for the team, but little mistakes cost them in the end. The Wizards’ coaching staff should be pleased with how aggressive their rookie Troy Brown Jr. played tonight. As he, and the rest of his teammates, continue to learn to play together, things could fair well for the young group. It is interesting to note that Issuf Sanon, the team’s 2018 second round pick, did not see the court.

The 0-1 Washington Wizards will return to action on Sunday against the San Antonio Spurs and Lonnie Walker at 3:30 p.m.