Your Morning Dump… Where the Celtics are back, and the Rob Will saga continues 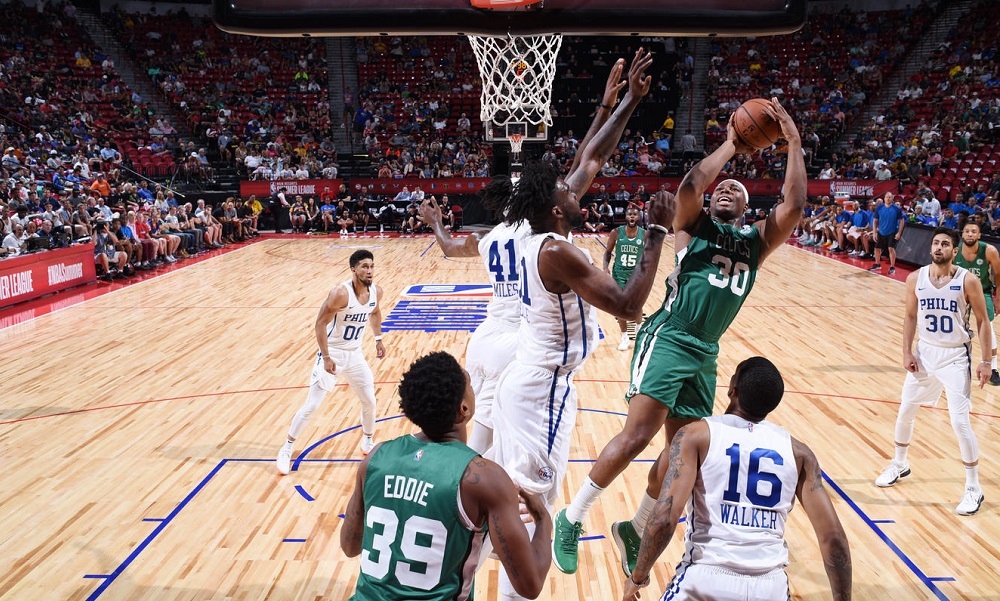 Your Morning Dump… Where the Celtics are back, and the Rob Will saga continues

It had been almost six weeks since a Celtics squad took the court before last night – how did we survive? – but thankfully that drought ended with a 95-89 defeat of the 76ers in the Vegas Summer League opener last night.

Befitting two guys who got some significant experience in the last real season, Semi Ojeleye and Guerschon Yabusele led a balanced attack with 16 points apiece.

2. Semi Ojeleye might be too good for Summer League.

Every year, several players look just a little too good for Summer League — often because they recently played an actual NBA season. This year’s Celtics candidate: Ojeleye, who hit threes, cut to the basket for dunks and even finished well around the rim en route to 16 points. It was a good reminder that before he was just a Thick, Jacked Frame coming off the bench as a spot-up shooter last year, he was the best scorer on a tournament SMU team.

The Dancing Bear struggled through the first three quarters, but he finished the game with a drive and a big dunk before hitting a 3-point dagger with under a minute remaining. Yabusele might have to prove some things to earn a roster spot this year, but he put together a competent performance on Friday.

Summer League Yabu has us HYPED for the season already pic.twitter.com/oEl6pSha5a

We had a strong start to open up Summer League play Friday night and downed the 76ers 95-89. pic.twitter.com/OxC1RC34eu

First-round pick Rob Williams made his Celtics debut in solid fashion, but it was brief due to a slight knee injury. It’s not like missing a flight and a practice, but until proven otherwise, it seems there’s always going to be something with him.

He didn’t play much due to bumping knees in the first quarter. But in his limited minutes, it was a solid debut for the first-round pick selected by Boston with the 27th overall pick. He had four points on 2-for-4 shooting to go with two rebounds in just six minutes. And just as important, he played with good energy at both ends of the floor which was a factor in him having a plus/minus of +6 which helped shift the game’s momentum in Boston’s favor.

Robert Williams (knee contusion) says he will rest and work through treatment and see how he feels tomorrow before making a decision on whether or not he can play.

According to Celtics PR, the injury is a left knee contusion and not considered a major issue going forward.

On the Sixers side, shooting guard Furkan Korkmaz turned in one of the highest-scoring performances in summer league history: 40 points, while hitting 8-14 threes. Korkmaz was on the Philly roster last season but appeared in only 14 games – ironically, the same number as his high-profile teammate, Markelle Fultz, who was watching from courtside in Vegas. For whatever reason, the Sixers’ brass don’t feel Fultz will benefit from playing this summer. Funny that now he might have to worry about his anonymous teammate passing him on the depth chart.

Boston.com: What you need to know about the Celtics summer league

A source close to Smart said Friday that the 24-year-old guard is hurt by the Celtics’ lack of communication during free agency, and that he is “over it” and prepared to ultimately sign a one-year qualifying offer and become an unrestricted free agent next season if it comes to it.

But league sources said the Celtics’ perceived lack of interest in contacting Smart was not indicative of any change in their view of the talented young guard. The Celtics and Smart’s camp remained apart on contract discussions, so the Celtics were essentially waiting for Smart to have talks with other teams and potentially sign an offer sheet that they would then almost certainly match. If this is a standoff, league sources said, the Celtics certainly do not view it that way.

The sources said that Smart remains an integral part of the Celtics’ future, and that the feeling has never shifted, despite the lack of an agreement to this point.

One league source said there is significant interest in Smart around the NBA at a price tag closer to $9 million annually, in line with the mid-level exception, but Smart has no plans at this point to entertain such offers.

Multiple sources said that it appears increasingly likely that unless Smart significantly lowers his asking price — which no one expects the guard to do — he will ultimately accept the one-year, $6 million qualifying offer he received from the Celtics and then become an unrestricted free agent after next year.

If Smart accepts the qualifying offer, he will have a no-trade clause in his contract this season.

Globe: Marcus Smart frustrated by wait, but Celtics have no plans to part with him

Yesterday, there was doom and gloom in Celtics Nation about Smart’s contract situation. Even the suggestion that Smart might not return to Boston was enough to generate mild panic on Celtics Twitter.

The above information, however, should put everyone more at ease. At least temporarily. Because nothing is for sure until it is.

Unfortunately, Smart signing this year’s qualifying offer would only delay the real reckoning about his contract. If he becomes an unrestricted FA next offseason, then we’ll really have something to worry about.

Remember a couple of years ago when some Celtics fans on Twitter tried to make #MelotoBoston a thing? Now he’s aging, excruciatingly overpaid, and nowhere near the talent he used to be. Maybe the Lakers would like to acquire him.