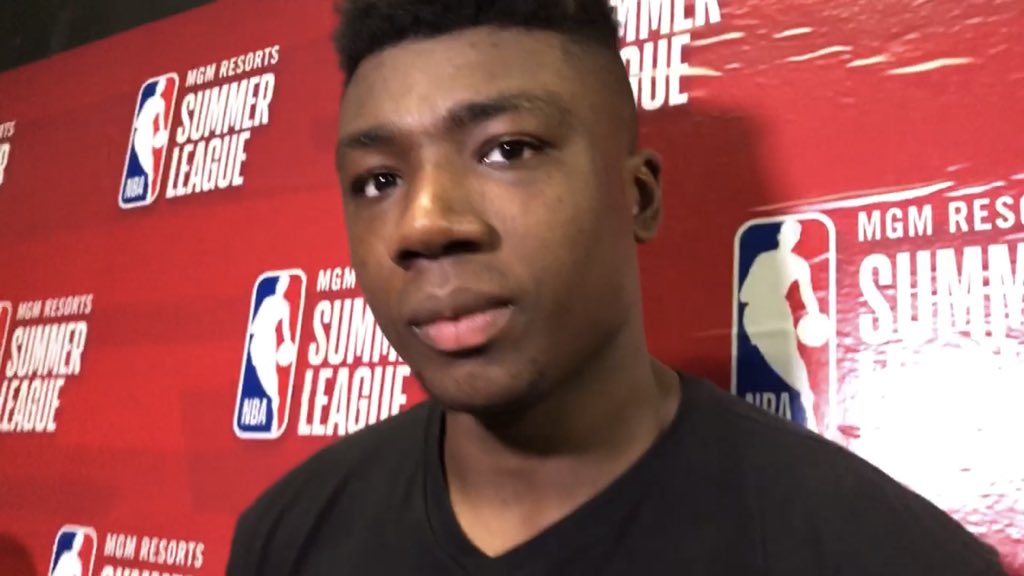 LAS VEGAS — In life, a person can approach adversity in two ways: fold under the pressure or make the most out of the situation. Big man Thomas Bryant is striving to do the latter. His path to the Washington Wizards was unexpected as the Los Angeles Lakers waived the former McDonald’s All-American before his July 5 contract guarantee date. In 37 G League games last season, Bryant averaged 19.7 points on 59.5 percent shooting including 36.4 percent from deep and 7.4 rebounds per game.

He still remembers the phone call and meeting with his former team about the decision to let him go. Nevertheless, he does not allow that experience to overshadow his future.

“Yeah, I was little surprised,” Bryant shared. “But, I was happy I was starting a new journey. One door closes and another one opens.”

Bryant received a phone call from his agent letting him know he was about to be waived. Subsequently, the center had a meeting with the Lakers’ General Manager Rob Pelinka who officially told him the news.

The Lakers were preparing to make the necessary moves to sign LeBron James as well as actively pursuing other pieces to make their franchise competitive. Bryant admits he would have enjoyed remaining a part of the Lakers’ future; however, he is also optimistic with how things played out.

“I knew what they wanted to do. I would have loved to been a part of it, but I wasn’t. So, that’s alright, too. Like I said, another door closes and another one opens,” Bryant repeated.

His journey from Bloomington where he attended college at Indiana University, while playing under then head coach Tom Crean to now as a Washington Wizard has been up and down. Nonetheless, Bryant looks at his past experiences as life lessons.

“It’s been great. Just learning different things and taking on different obstacles,” Bryant said. “It really matures you after a little bit. You start to think about it and you start to cherish the moments that you have.”

Thomas Bryant describes his journey from Indiana University to now with the Wizards.

He says he’s ready to take on the role of being the big man.

The soon to be 21-year-old at the end of the month has been transitioning from Los Angeles to Washington over the last week and a half since the latter claimed him off waivers. Even now as a Wizard, there is still a lot of uncertainty with Dwight Howard, Ian Mahinmi, and Jason Smith also on the roster. Yet, Bryant said he is focused on now and will let the future handle itself.

“Man, [I’m] just staying positive each and every day. Just having things come to you so quick. Things you can’t really control. All I try to think about is control what you can control, and let God take the rest.” Bryant explained.

On Monday, Washington recorded their first Summer League victory by beating the Philadelphia 76ers by a score of 87-75. Bryant had himself a double-double with 16 points and 12 rebounds. He shot 5-for-11 from the field and knocked down all six of his free throw attempts. The coaching staff wants him to compete on both ends of the floor, which is Bryant’s easiest job as he is naturally amped up. After one of his two blocks, Bryant roared, “gimmie that shit.”

Thomas Bryant on his double-double tonight.

“I just feel like I was doing my job out there. Being the five man you gotta be able to rebound and score the points as well.”

Through three games in Las Vegas, Bryant has averaged 14.3 points on 57.1 percent shooting and 7.7 rebounds per game. The 7-6 wingspan big looks to ensure himself a spot on the opening night roster with continued strong play as the Summer League tournament kicks off on Wednesday.