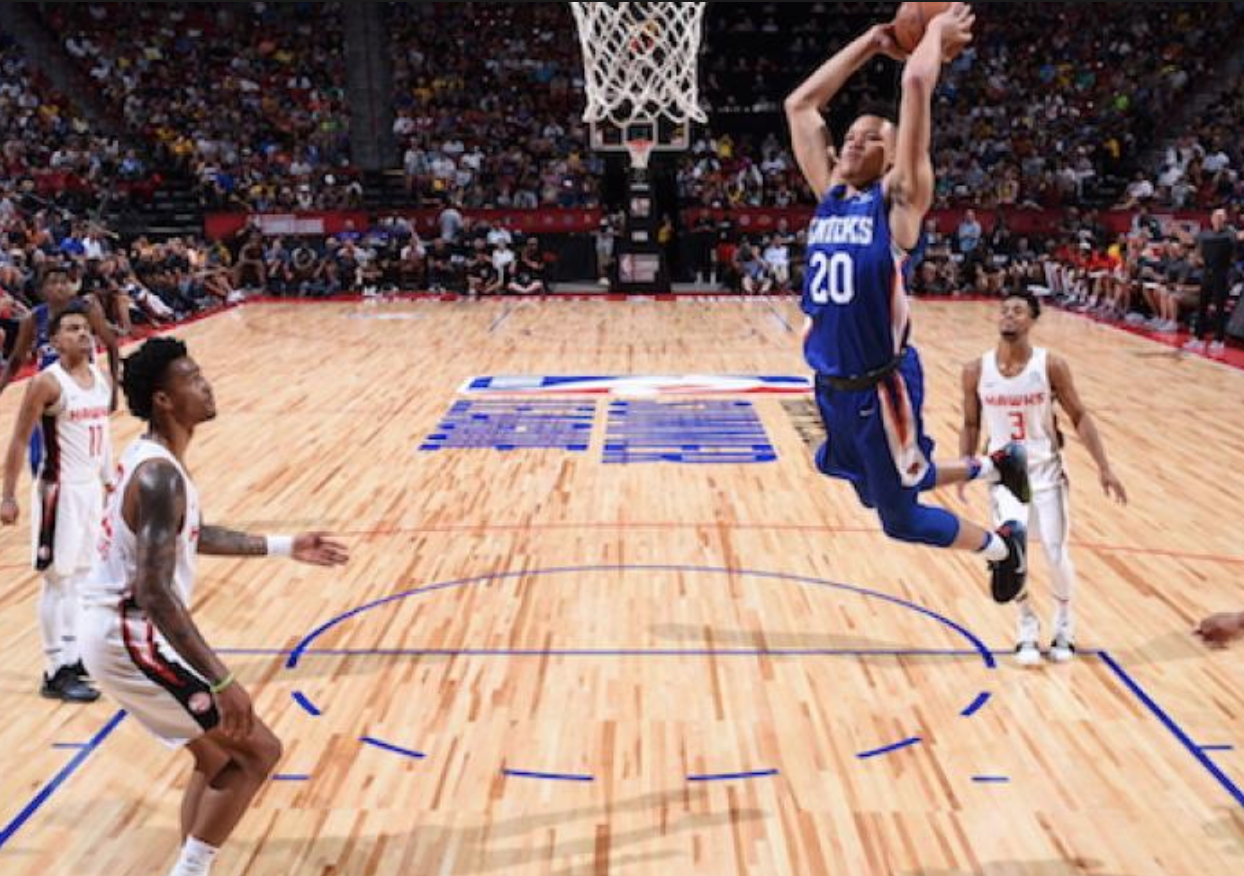 The New York Knicks have opened up Summer League play in Las Vegas, and are off to a good start. After two games, fans should be extremely excited about both of their 2018 draft selections, and the development of three other players.

Here are five players to keep an eye on as Summer League action rolls on:

The Knicks selected Knox with the ninth overall pick out of the University of Kentucky. Amid some concern of Knicks fans on draft night, Knox has already shown flashes of being a talented and smart basketball player. After two games, Knox has done a little bit of everything. He’s getting to the line, knocking down shots, finishing in transition and showing versatility on defensive switches.

The knocks on Knox (pun intended) coming out of school were that he had a low motor, and that he disappeared in games too often. Even though we are only two games in, those questions about his motor is starting to go away. He has already shot 16 free throws in both games, and has been diving on the floor for loose balls, as well as hustling back on defense. Expect him to have even bigger games moving forward when his shots start to fall.

19-year-old Frank Ntilikina is another player to keep an eye out for. After an up-and-down rookie season, Ntilikina has been working on his weaknesses all summer with different coaches and trainers. His handle is improving, and his creativity on shot selection has looked much better thus far.

The league knows Ntilikina can already play defense, as he ranked No. 1 in pick-and-roll defensive percentage last season. Ntilikina is long, active, smart and has the makings and tools of a heady guard in today’s game. After an average first Summer League game, Ntilikina bounced back in his most recent contest, with 17 points and six assists.

The unknown Mitchell Robinson finally introduced himself to the basketball world, and it sure was encouraging. The tall, athletic center has been a pleasant surprise for Knicks fans. Robinson has been active on the boards, blocking shots, setting good screens and throwing down some big-time dunks.

Not a lot of guys his size can do all that, and Knicks coaches are pretty excited. What is so encouraging about Robinson is that even though he missed a full year of competitive basketball, it doesn’t look like he missed a beat. His conditioning needs to be improved, and he is fouling too much, but with coaching and time, those are fixable issues. Keep an eye out for Robinson.

Barring any roster changes, Troy Williams will be on the Knicks roster this upcoming season. The athletic, high-flying wing can really get up and down the court, and you can see his athleticism oozing on the screen. Williams has been coming off the bench so far, but is providing much-needed scoring, and has also hit a few highly-difficult shots as well.

Williams needs to work on his shooting mechanics, as well as his feel for the game, but there is definitely a lot to like about him. Williams had huge Summer League games last year with Houston, so expect some more big games this summer, assuming his minutes are high.

The Knicks’ second-round pick from a year ago is an intriguing prospect. He is probably the best spot-up shooter on the team at the moment, and is built like an NFL running back. Dotson saw little playing time last season, but showed signs of being a positive contributor, like when he had 30 points and 11 rebounds against the Heat late in the season. Dotson lacks creativity off the dribble, and disappears at times, but he really hustles and digs in defensively, which is something head coach David Fizdale has been preaching about since being hired.