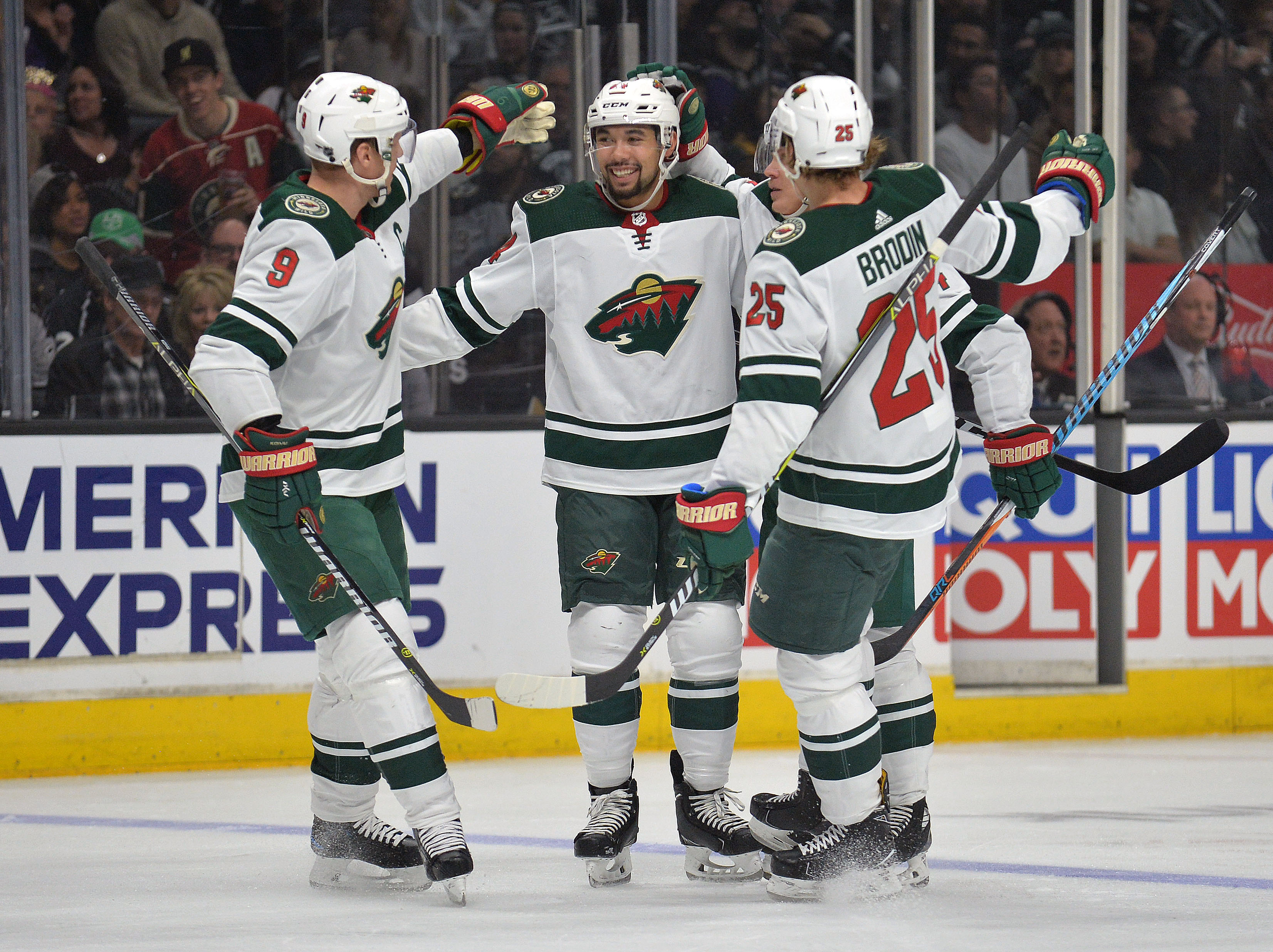 I hope you enjoyed that little trip down memory lane.  Quantum Leap, the Don Bellisario-created action adventure drama that ran on NBC from 1989-1993 told the story of scientist Sam Beckett who could travel back in time by exchanging places with those that lived in the past and change hisory for the better.  Throughout the series, Sam (Scott Bakula) ‘leaped’ into the lives of minor league baseball players, beauty queens, pilots, TV reporters, outlaws and eccentrics and with the help of his friend Al Calavicci (Dean Stockwell) who would appear as a hologram and would help try to figure out what must be done to “change right from that once went wrong” so he could make another leap that would hopefully bring him back to his own time.  The show was one of my favorites as a kid and I still watch the re-runs today.

What if we could have a Minnesota Wild version of Quantum Leap?  We could send back Sam to have him fix some of the Wild’s mistakes and hopefully steer it towards a brighter future than the gloomy outlook the team appears destined to have.  What events would we change?  Whose lives would we have Sam leap into?

Between myself and my partner in crime, Theresa Ferries, we chose 3 events in the Minnesota Wild’s history we’d like Sam to re-visit and change for the better.  I am sure there will be other events that you may feel we should revisit but we’re going to keep it short and sweet and not try to create a whole 22-episode season of Wild Quantum Leap.  So without further adieu, let’s begin.

1. October 8th, 2008 St. Paul, Minnesota – Marian Gaborik rejects Wild’s 10-year, $80 million contract offer. ~ At first glance you might be saying, that’s good he didn’t sign the offer, so what’s wrong with this?  Marian Gaborik, the best player the Wild franchise has ever drafted or had on its roster always seemed to be a little unhappy in Minnesota.  It wasn’t a ‘big’ city and when he rejected this generous offer by the team it wasn’t the first time the two parties clashed in a contract dispute.  In fact he famously held out in 2003-04 only to sign a contract mid-season for the same amount the team originally offered that summer.  So what makes this different?

Well just 8 days later, Gaborik suffers a ‘lower body injury’ (groin most likely) that would keep him out of the line up for most of that season which had him injured during the trade deadline which scuttled any chance to deal the pending unrestricted free agent away.  So I would send Sam back to take the place of then Wild General Manager Doug Risebrough and immediately trade Gaborik upon his rejection of the team’s contract offer so the team could have salvaged some value from the best player in the franchise’s history.  Instead Risebrough decided to wait and the team watched their best asset walk in free agency for nothing in return (sorry if that hits too close to home New York Islanders fans).  The St. Paul Pioneer Press‘ Tom Powers even wrote about this scenario before it happened.

As much as some like to tease Tom Powers on his hot takes, many Wild fans were well aware of Gaborik’s injury history.  Many fans used to refer to Gaborik as ‘Glass Groin’ for that reason and knew the team was taking a big risk by not dealing him after he had rejected the contract offer.  Minnesota’s inability to cash in on Gaborik’s value left a void that the franchise never fully replaced.  It wasn’t until this season that we had a player (Eric Staal) equal Gaborik’s 42 goals as the franchise best single season goal scoring mark.  It is difficult to know what kind of value the team may have received from a trade involving Gaborik but considering he had his 42-goal season prior this injury-marred campaign, he probably would’ve fetched multiple draft picks and / or prospects or even a decent roster player in return.

The seasons after Gaborik’s free agent signing with the ‘big city’ New York Rangers the Wild were an aimless club whose 1st line consisted of Mikko Koivu, Andrew Brunette and Antti Miettinen.  Ouch.  Asset management is huge, and this colossal failure was Risebrough’s biggest mistake.

2.  July 22nd, 2005 Ottawa, Ontario – Wild Draft Benoit Pouliot 4th Overall ~ This might seem like a cheap shot but this was certainly a big missed opportunity for the franchise when the Wild selected the Alfred, Ontario-native 4th Overall.  The 2005 NHL Entry draft was labeled the ‘Sidney Crosby Sweepstakes’ because all of the NHL teams were put into a lottery with a theoretical chance to draft a generational talent.  Teams were assigned 1 to 3 lottery balls based on their playoff appearances and first overall draft picks from the past three years.  So due to their lack of success which was not uncommon among expansion teams, the Wild had 3 balls in the lottery hopper and still was quite fortunate to draw the 4th Overall selection.  That should have guaranteed the team selected a blue chip prospect.

We are not going to suggest Sam rig the lottery so the Wild would get Sidney Crosby (although wouldn’t that be an intriguing ‘what if’ for the franchise?!?!) but rather change who we selected 4th Overall instead of Benoit Pouliot.  We would have Sam ‘leap’ into the life of then Wild GM Doug Risebrough and instead of picking Pouliot we’d have him pick Anze Kopitar instead.  The talented Slovenian, then honing his game in Sweden would’ve become the Wild’s 1st line center for the forseeable future and demoted Mikko Koivu to a 2nd line or even 3rd line center.  While it may be tempting to draft goaltender Carey Price who was also available I think Kopitar would’ve given the team the true 1st line center it has always wanted but has never been able to find.  The two-time Selke Award winner as the league’s best defensive forward is also a fairly consistent offensive producer and has scored at least 20 goals, 9 times in the last 12 seasons and had at least 60 points in 10 of the last 12 seasons.

While Sam is changing history with the Kopitar selection he might as well stick around and fix the Wild’s 2nd round pick in 2005 which was enforcer Matt Kassian.  It was clear to just about anyone at the time that enforcers were steadily being phased out of many NHL rosters and to draft one with your 2nd round pick was more than a bit of a head scratcher.  He did play in some NHL games, including 28 games for the Wild but in a few seasons he had retired from the game.  Heck the rest of the 2005 draft was awful for the Wild with Anthony Aiello, Kristofer Westblom, Kyle Bailey, Riley Emmerson, Morten Madsen were all draft busts that never even played in a single NHL game so Sam might as well stick around for the whole thing.  Jonathan Quick, Kris Letang, Ben Bishop, Keith Yandle and Patric Hornqvist all could’ve been had in those later rounds and each player could’ve been significant difference makers in the organization.

When you consider the fact the Wild scouting staff and front office really wasn’t burdened by the day-to-day grind of an NHL season its remarkable they swung and missed so badly in this draft.  We will spare you with going through other ‘what if’ draft scenarios and simply say the 2005 draft was the one where the biggest opportunity was missed.

3.  October 28th, 2013  St. Paul, Minnesota – Matt Dumba plays his 10th Game – This is another subtle event, but one that could have significant ramifications on the near future.  The team decides to let 19-year old defenseman play against Chicago, no big deal right?  Since it was his 10th game, it started the first year of his 3-year entry-level contract.  The Wild were crushed 5-1 that night and Dumba did not register a single point.

He would play in 3 more games that season with the Wild before becoming a regular healthy scratch and was eventually released to play with Team Canada at that year’s World Junior Championships.  After the WJC’s were concluded he would return to major junior to play for the Portland Winterhawks.

I would have Sam ‘leap’ back into the life of then Wild GM Chuck Fletcher and send back Dumba back to major junior after their October 26th game (also against Chicago in a home-at-home series) to preserve a year on the entry-level contract.  Did playing 13 NHL games really help him develop more than playing in just 9?  It seems like such a needless waste of a contract year.

With the Wild needing to re-sign the now 23-year old defenseman, who is a restricted free agent wouldn’t wish it had an extra year?  Especially when it has to re-sign Jason Zucker as well?

What other Wild moves would you send Sam back in time to fix?  Tell us on Twitter @CreaseAndAssist or in the comment section below.