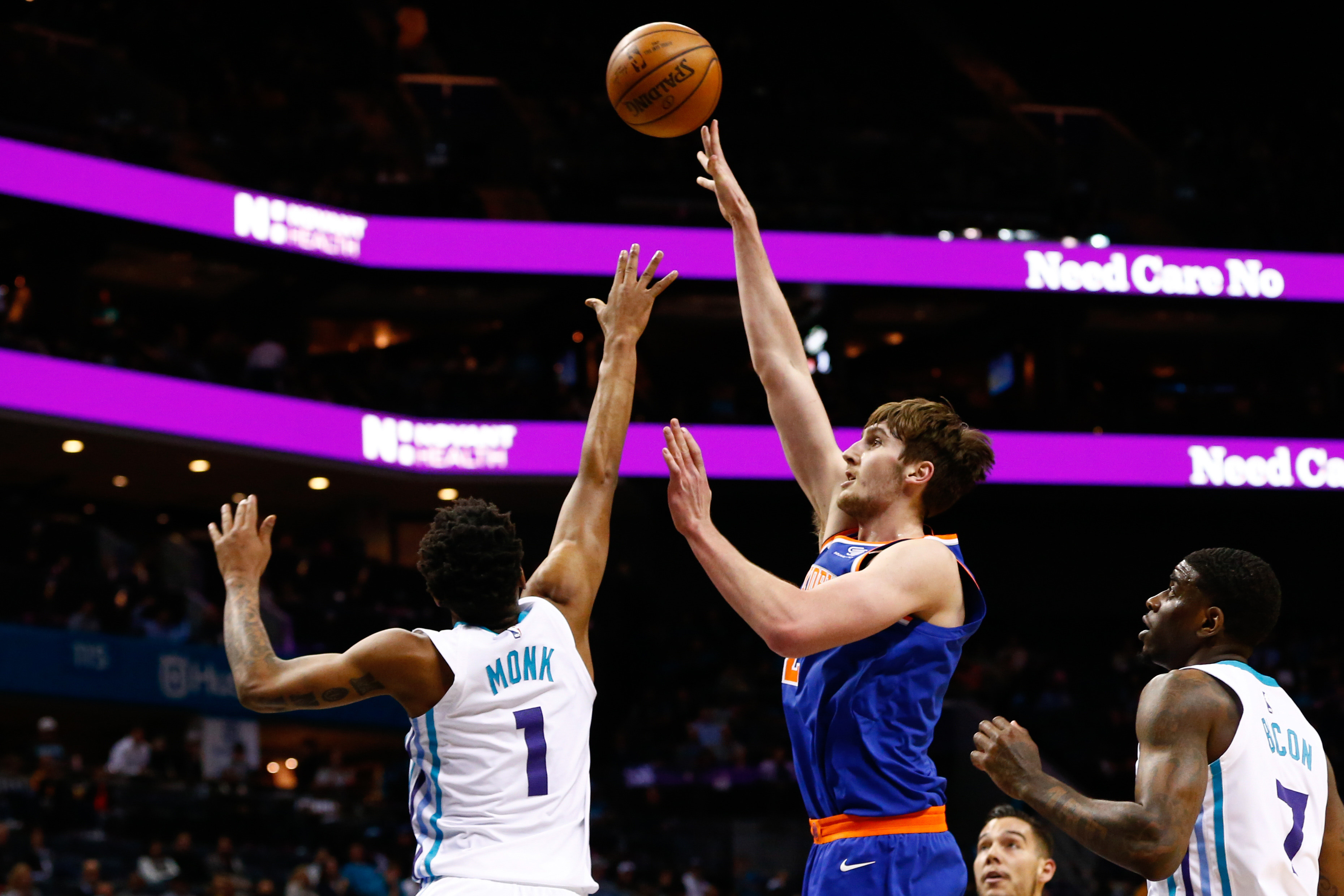 The Westchester Knicks started out February with back-to-back games against the Greensboro Swarm and Canton Charge. As Luke Kornet left the floor at Canton Memorial Civic Center on February 3, his next opportunity was knocking at the door.

It was just the beginning for the Vanderbilt product. His wild month was set to take off. He started off February by playing at the Westchester County Center—30 miles north of Manhattan, New York— and then spent the majority of the month with the New York Knicks.

The rookie center was with New York, but didn’t see any time on the court. He sat behind the bench against the Milwaukee Bucks in a suit. Through unfortunate injuries and trades, an opportunity eventually opened up for him.

It was a brisk, cold night in Toronto, Canada in early February. One day before tip-off at the Air Canada Centre, news circulated that Kornet would make his NBA debut. Months of development and growth with the Westchester Knicks prepared him for this moment.

The moment he checked in was filled with different emotions. There was a bit of an adrenaline rush, but that was subsided due a minor wardrobe issue. As he was sitting at the scorers table for close to a minute and half ready to check in, the rookie center noted he was having difficulty tearing off his sweatpants since the buttons were a lot tighter than the ones that he previously had. The mix of having a bit of frustration and embarrassment helped keep his mind away from the moment. With that segment behind him, Kornet felt like he was ready for the excitement of his first game.

With his parents in attendance, Kornet had a debut to remember. While New York didn’t leave the Air Canada Centre with a victory, he recorded 11 points, 10 rebounds, and blocked four shots. The Vanderbilt product felt like he was more focused on the game than anything else.

“I honestly think throughout the game, I wasn’t really thinking about anything else but playing,” Kornet told KnicksJournal.com. “I honestly feel the best way to play basketball is when you’re not really cognizant and when you let yourself play. It was just great to kind of be in that state and to be able to enjoy playing basketball that much. That’s all you can really ask for when you’re playing; just that when you’re in a state where you can just play basketball, play hard, and just try to help your team.”

Whether it was in Westchester or Madison Square Garden, each crowd provided a different type of environment. Kornet detailed that there were  ceremonial differences between the two and noted that a sold out smaller arena is a great environment.

“Within the course of a week, we’re thrust in that role of being able to play,” Kornet said. “From where we had been like a week and half before (in Westchester), it was a big jump that we didn’t really know would ever come necessarily. We were definitely excited to be able to have that opportunity to come up, which we weren’t sure would ever really present itself. I think it’s something we’re grateful and thankful for.”

The big man remained focused on the goal at hand, which was to make an impact on the Knicks and help lead the team to victories. Even though the changes in arena, he felt he was locked into the moment of the game, which took up his attention.

After starting his first 33 games of his rookie season in the G League, Kornet spent a good portion of the final part of the season in the NBA. After making his debut with New York, he spent 19 of his 27 final games with the Knicks.

“It was great to be able to have that entire last segment of the year playing a lot of games with New York,” the Knicks’ center explained. “There’s a big adjustment in not only the people you’re playing and the type of basketball in the NBA being a little different from the G League, but also playing with new guys and (players) who you had been with for the entire season. It was a great opportunity in order to show your development, be able to actually show your abilities on the court & to be able to compete at that high level, and to see where you’re sitting at after spending the whole season so far in Westchester.”

Kornet continued by stating where he saw his game grow the most from the beginning to the end of his season.

“I think one of the biggest things was just like really learning how to operate offensively, be able to read pick-and-rolls, and being able to read handoffs,” the Knicks big man said. “I feel like I had some experience with it in college, but it wasn’t as much freedom and possessions where it’s the best space to be working out of that much. That’s how I got so many reps in Westchester in terms of being able to try to contain and be able to adapt to different coverages, so I think that was a huge area of growth.”

By signing a two-way contract following the 2017 NBA Draft, Kornet went through the whole process with the New York Knicks. He participated with the team in Summer League, training camp and preseason. The 7’1″ center saw the organization invested in his development where he was able to grow and develop with the Westchester Knicks.

“I felt like even through the Westchester season, we were still in constant communication with (New York), so I was really there to be able to try to improve and be there whenever the team needed it,” he said. “I felt like I was definitely in a position where I was there to improve and be able to show that I could be of use when the opportunity opened up. It’s kind of like the entire year built up to the end of it. It really worked out pretty well by being able to go through the entire full progression of what G League contract, which I think was meant to be from the onset.”

By signing the two-way contract, it has helped prepare the rookie center for his NBA future. While teams were shuffling their two-way players, the New York Knicks remained committed to the growth of their young players.

“It was great that it worked out really well for me,” Kornet said. “The entire time with New York, I did feel comfortable that they regarded me as one of their guys, which I think is a big difference. I felt like they were invested and confident in me from the beginning, so the two-way deal was more than just a trial and error type of deal. It was more of a real developmental type role and something they were keeping their eyes on.”