Your Morning Dump... Where Jayson Tatum is spending his summer torching Joel Embiid 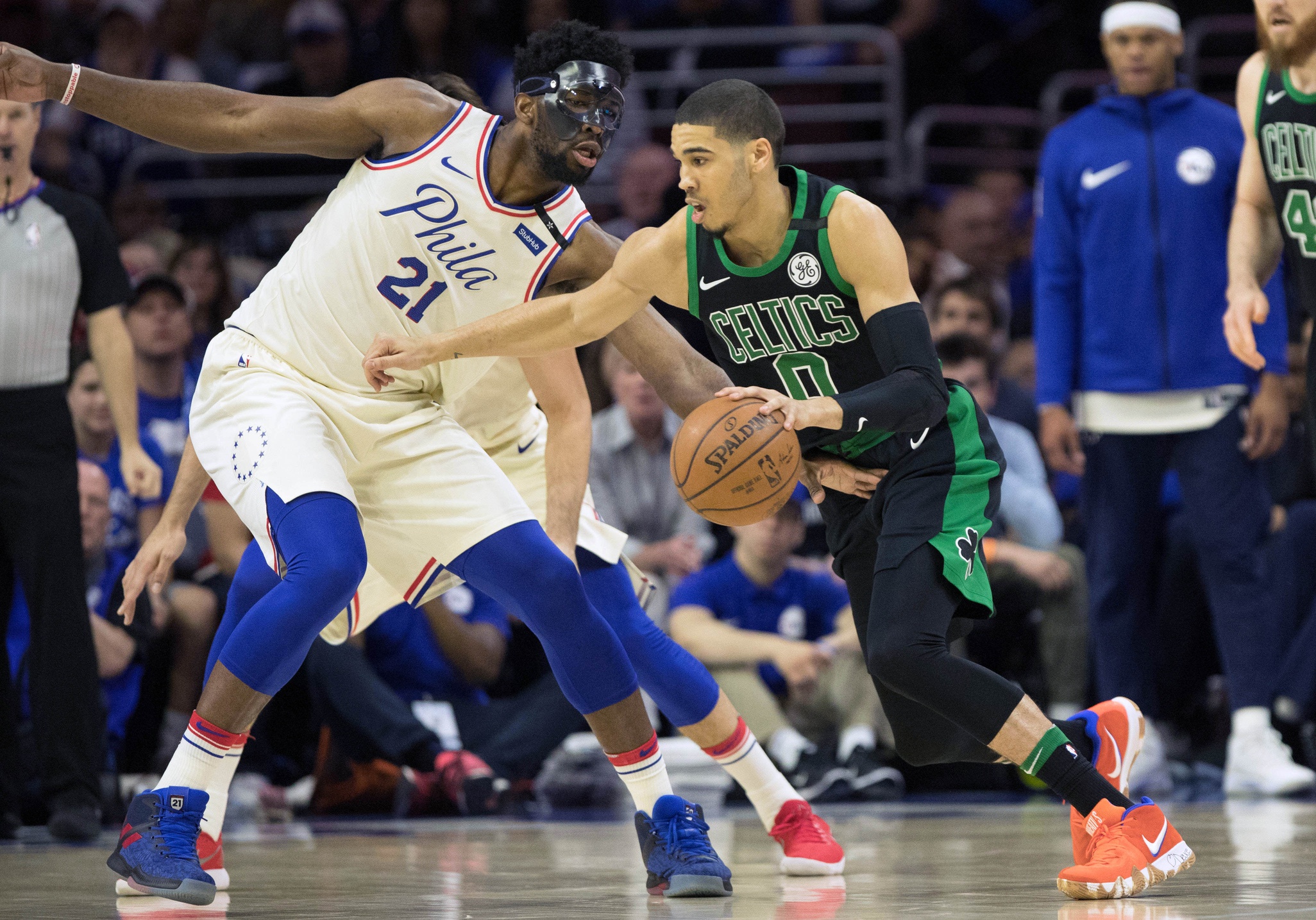 Your Morning Dump... Where Jayson Tatum is spending his summer torching Joel Embiid

First, Jayson Tatum tells Joel Embiid, "I beat you in the playoffs."

Then, he slaughters him, 1-on-1. This kid's filthy. #Celtics pic.twitter.com/dUG6yzYmw9

I could watch Jayson Tatum hit fadeaways over centers all day. Tatum looks to have bulked up a bit already, which is certainly necessary for him to take the next step as a player. A little more speed and strength will help to fix the pattern of getting the ball swiped on the way to the basket, as well as aid his quick, effortless release on those jump shots.

Also, watching him ricochet off Embiid makes it all the more impressive to me that Aron Baynes can stay in front of him. Definitely a sound investment by Ainge to keep him around.

If you want more of Tatum, Embiid, Semi Ojeleye, and others working out check out this video.

On page 2… Marcus Smart weighs his (lack of) options

New: According to a league source, Marcus Smart is seeking less than $15 million per season. He met with two teams in Vegas Monday and will meet with two more today. Beyond pleasantries, there's been no more contact with the Cs yet: https://t.co/Hq78XI3nh8

Smart, according to source, would "consider" the four-year extension offer Celtics made last October, which was worth more annually than the three-year, $33 million deal just signed by Dante Exum.

This confirms a lot of what we thought we knew, but had to wait a while to see if it was true. The market wasn’t going to give Marcus Smart an Evan Turner-esque deal (four years in the $70 million range) because it isn’t the year 2016 anymore and there isn’t a ton of cap space to go around.

Here is the latest I've heard on Marcus Smart and his restricted free agency:
SAC is prepared to move forward with their young kids at PG/SG.

ATL is locked in on the guys they have.

BKN could get involved to make it a challenge but don't really have the space to make BOS blink.

With so few (or literally zero) offers on the table, Boston holds all of the cards here. So for all of you asking “what are they waiting for?”, I hope this provides an answer for you. The Celtics aren’t bidding against anybody, which means there’s no urgency to get a deal done right away. If Smart gets an offer, the Celtics will almost certainly match it immediately. Nobody has the cash to make an outrageously high offer, and if they did, the Celtics could still match and use his contract as a trade piece later in the season if they don’t want to foot the bill. It wouldn’t make sense to push Smart towards just taking the qualifying offer because it would only sign him for one year, leaving him with no trade value and an option to walk away next summer.

In short, the Celtics would love to match a reasonable offer sheet for Marcus Smart and there are currently no offers to be matched. So, we wait. In the meantime, stop freaking out about every quote you see.

In a brief interview with the Globe and The Athletic as he walked to an adjacent gym on Monday night, Smart was asked where things stood with the Celtics.

“That’s what I want to know,” he said. “I have no clue. I can only control what I can control.”

Just because Smart says he doesn’t know what’s going on doesn’t mean the Celtics are keeping him the dark. The fact that people like me can figure out the Celtics’ financial situation from my couch means Smart and his agent should know exactly where he stands with the organization. He’s good enough to keep around, good enough to pay more than the minimum, and not good enough to offer the absolute most amount of money possible. It’s as simple as that.

Boston Herald: All eyes on Marcus Smart as he meets with other teams | NBA.com: Marcus Smart says he has “no clue” where he stands with Boston Celtics | Boston.com: Paul Pierce on Marcus Smart: ‘I think he does come back with the Celtics’ | CBS: Marcus Smart still meeting with teams; open to taking less than $15M per year