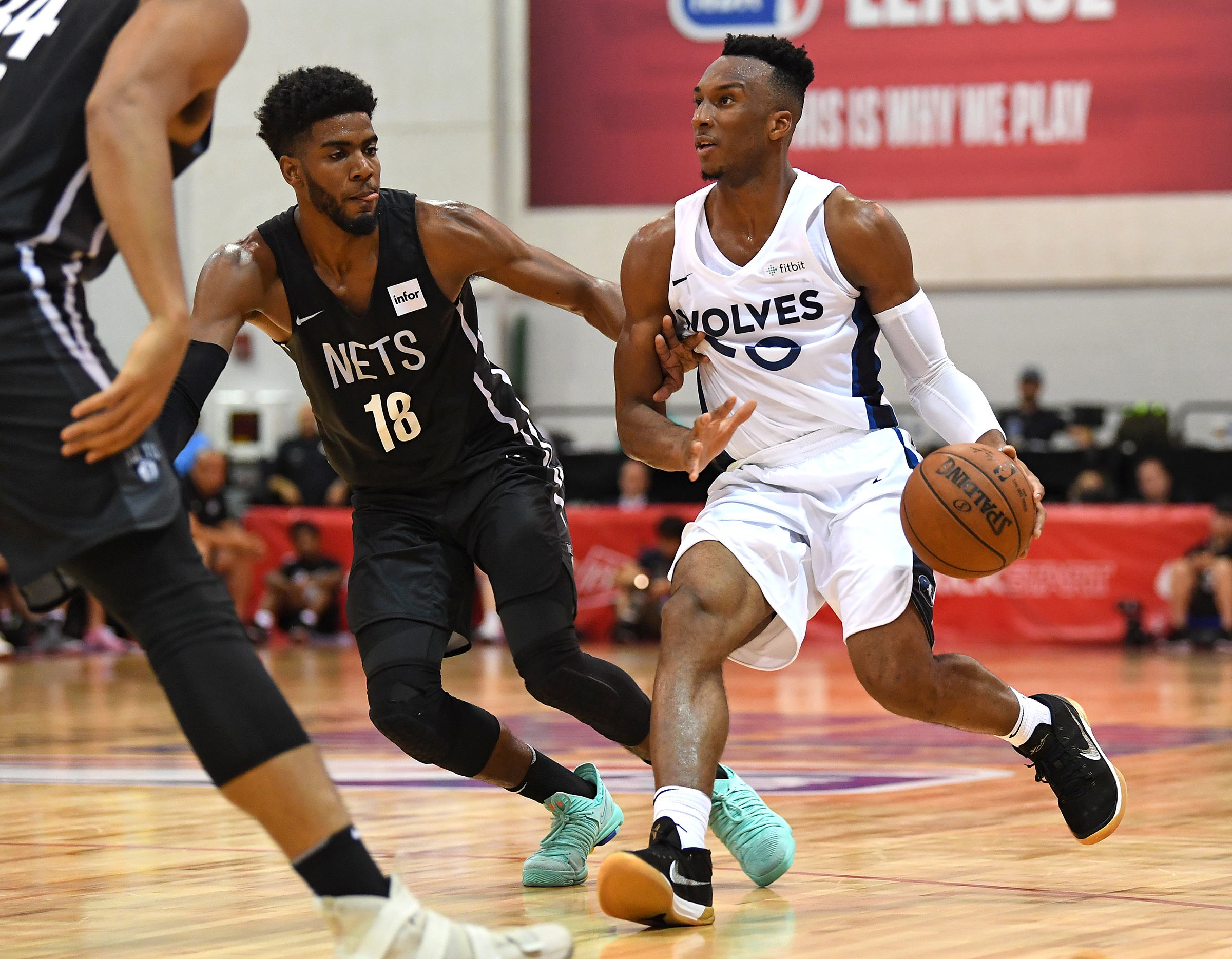 Summer League is not for your casual NBA viewer. It’s like a bunch of middle-aged men playing a pickup game at a local high school where it’s impossible to foul out and each one of them thinks they’re still in their glory days of high school where they’re trying to impress some girl on the sideline and think every shot is a good shot. The same could be said about summer league where every player out there is trying to leave an impression on a GM and make an NBA roster, but the result is a plethora of quick shots early in the shot clock and missed defensive assignments.

Yet I love every second of it and watch every game because even though the quality is essentially like watching my dad and his friends play, the summer league represents the future of the league. And boy does the future look bright for the Minnesota Timberwolves with their two young draft picks, Josh Okogie and Keita Bates-Diop (respect the hyphen).

Neither showed particularly well on the offensive side of the ball. Keita shot 38 percent while Okogie shot only 30 percent from the field through four games. The sample size is small, and to overreact about a few poor shooting performances from 2 wings in the summer league would be foolish.

For whatever reason, history shows that not many guards/wings shoot very well in SL. Yet KBD’s shot looks as smooth as a well-aged whiskey and he has a nearly complete offensive game. And Okogie could very well be the best shot-blocking 2 guard the league has seen since prime Dwyane Wade.

So yes the summer league isn’t particularly great basketball, but there was so much to like from both the Wolves new draft picks as well as some of the older guys on the team. I just couldn’t help myself from doing a breakdown of the three I think will make an impact on the Timberwolves roster this season.

Of all the second-round draft night steals over the years, KBD was one of the easiest to see coming at pick 48. And while technically he can’t be talked about as a “steal” quite yet (as he hasn’t played a single NBA regular season minute), he has all the tools necessary to be a productive role player to supplement a Minnesota bench unit that was atrocious a year ago. I think he could have a more immediate impact than Josh Okogie (their 20th overall pick) due to his ability to knock down shots.

Let’s start with the shot:

KBD was primarily a mid-range shooter in college at Ohio State but was also able to shoot it from range at a 36% clip which helped him earn the Big Ten POY award last season. His shot looks fluid, and all it will take is reps for this young man to become an effective long-range sniper.

Along with the long-range shot, he also has the ability to put the ball on the deck and make plays off the dribble for himself and his teammates. He has an advanced floater game which will help him compensate for his lack of athleticism against bigger, more athletic defenders.

Defensively he has the length and wing-span that makes coach Tom Thibodeau drool. He isn’t overly athletic, and was beaten off the dribble multiple times during summer league, but was able to make up for it with his length and timing to make the blocks as you see here:

At times he is lose with his handle when driving into traffic and makes some rookie mistakes, but overall he has a throw-back game I love to watch. A lot of comparisons were made to Trevor Ariza around draft night and I was lukewarm with those comps. But after his performance in summer league against grown men, I’m starting to come around.

And if he can be anywhere near as effective as Trevor Ariza, the Wolves very well could have found the steal of the draft.

The first thing that sticks out about Josh Okogie when you watch him is his motor. The dude never stops moving. And he’s an absolute menace on the defensive end.

Okogies defensive game tape just absolutely jumps off the screen and swats your expectations of him into oblivion. A colorful way of saying he's good at D.

Okogie is like that one guy that you absolutely dreaded playing against back in high school or college because you knew he was going to make you look silly, at which point you suddenly developed a “cramp” that you just couldn’t fight through. (I myself never experienced that myself, as I was like really, really good which is why I’m now writing about other people playing basketball…)

With the Timberwolves Summer League done and dusted, here is Josh Okogie's official defensive highlight reel over the four games. Summer League is meh but this kind of hustle, athleticism and IQ will translate to the NBA: pic.twitter.com/J63NAwY4q5

His shot-blocking was one of the most impressive tools he displayed at summer league ranking 13th among his contemporaries at 2.00 blocks per game. His hands are quick, and his feet are quicker. His lateral quickness will be an instant boost for the Wolves second unit and will challenge for quickest feet on the team with the likes of Jimmy Butler and Andrew Wiggins. Okogie’s game is predicated on athleticism and effort. At least so says his coach.

The fact that Thibs drafted Okogie 20th overall shouldn’t come as a surprise to anyone who watches him play. He flies around on defense and disrupts his opponents. If I were Thibs, I would consider subbing him for Butler or Wiggins early in the 1st Q when KAT is out there to carry them offensively and have Okogie wear down the opposing teams best guard. And there are a lot of them in the Western conference (Westbrook, Lillard, Steph, etc.). Allowing Butler not to have to guard the other teams best offensive player will allow him to conserve energy when Thibs predictably plays him around 40 minutes per night. If Wiggins refuses to defend consistently, at least the Wolves have a fall-back plan in place.

Okogie’s offensive game needs work. He has trouble finishing around the hoop in traffic (which is strange due to his 42” vertical and toughness), his handle is loose, and his decision making needs work. He will make some spectacular plays but will make even more bad ones. Not to mention he has a weird hitch in his shot. He did shoot nearly 38 percent from three in college, and those results are hard to argue with. So maybe the shooting coaches will wait to see if his shot improves over the course of the year before intervening, but regardless, he did not shoot well in summer league (14-47). Again, it’s summer league so an overreaction is almost inevitable, but it would be moronic to throw away his sample size from college.

Amile Jefferson led the summer league in rebounds per game at 12.6 and last season was named to the G League All NBA second-team, All-Defensive team, All-Rookie team, and was named to the 2018 G League All-Star game. The fact that he is still not on an NBA roster blows my mind. Jefferson is, at least in my eyes, a Taj Gibson clone. His rebounding, screen setting, defense and intangibles that he brings to the table are very valuable and could be useful for the Timberwolves. The only problem is that the Wolves have a back-log of bigs already and using another roster spot on a big doesn’t make a lot of sense. If the Wolves don’t sign him to at least a two-way contract, there is a very good chance he signs somewhere else because he was far and away the most consistent player on the court for the Timberwolves in Las Vegas.

The Wolves most significant need last year was wing depth, and it looks as if they found it with their two young draft selections. They each have very different skill sets, but it seems as if John Lucas III found a balance between Okogie’s energizer bunny-style defense and Keita Bates-Diop’s throwback style game. Each can contribute right away in their specific roles, and their contributions will be vital for the Timberwolves’ bench that ranked near the bottom of the league in almost every category last year.