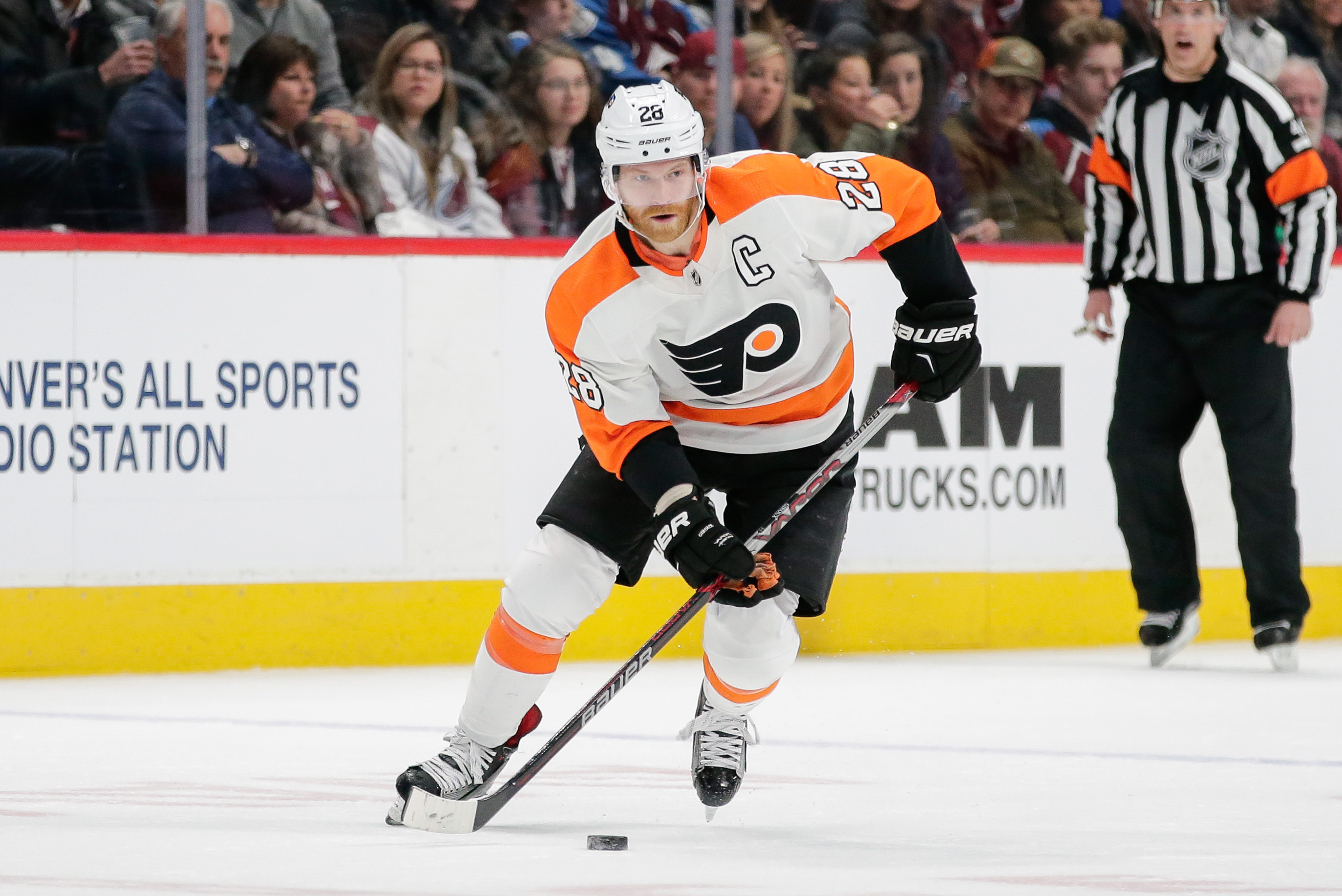 Philadelphia Flyers forward Claude Giroux has had a pretty good offseason so far as he tied the knot with his fiancee Ryanne Breton on July 8. If you have not seen the pictures, I highly suggest going on his Instagram and checking them out because they are wonderful.

Giroux’s offseason kept getting better as the Flyers acquired Toronto Maple Leafs winger, and former Flyer, James Van Riemsdyk, with his and Jake Voracek’s recruiting help. Van Riemsdyk is sure to be a boost to the team as they continue their quest for their first Stanley Cup since 1975.

But the one move that I keep hearing about is if Giroux will make the venture back to center for 2018-19, after such a productive season at the left wing.

I have seen reasons why Giroux should move, but here are some reasons why I believe he is exactly where he belongs on the left wing.

1. Why change something that was obviously working?

After the 2016-17 season, where Giroux finished with only 58 points and 14 goals, people were bashing the performance of the captain, saying he was not a strong player and did not deserve the role of Flyers captain.

However, after this past season, I don’t think the Giroux haters have the evidence anymore. Yes, Giroux was coming off of injuries in the 2016-17 season, but you cannot possibly ignore the production that came from the top line last season.

Giroux finished second in the league in points (102) behind the Oilers’ Connor McDavid, and finished fourth in the conversation for the Hart Trophy. He would have placed third if he had one more vote!

Last season was the first time in his career that he was able to get over the 100 point plateau, and also had his career high in goals and points.

Moving him back to center would absolutely be a determent to the team as far as progressing towards the cup. Giroux has not got anywhere close to the production that he got this past season in any of the previous seasons of his career.

2. Giroux at left wing did not only boost himself, it boosted his linemates on that top line

Sean Couturier as a first line center had the best season of his career with 31 goals, 45 assists, and 76 points. He was also in the running for the Selke Award, (Yes, I’m still annoyed he lost) while Travis Konecny finished with 24 goals, 23 assists, and 47 points.

The Flyers’ top line was like a well-oiled machine on some nights, and all three players posted career highs. Putting Giroux back at center may be a balance for the Flyers position wise, but production wise? I’m not so sure.

Couturier and Giroux were basically inseparable until the playoffs where they struggled without each other, while Konecny certainly had trouble finding an offensive rhythm in some games when he was not placed on that top line with Couturier and Giroux.

Moving Giroux back to center becomes detrimental to the other centers currently behind Couturier, Nolan Patrick and Scott Laughton. Patrick’s rookie season gave him the 2nd line center position task, and I think he did rather well.

Giving him a chance to be the 2nd line center again shows how much trust that you put in the second-year player to succeed, especially if you give him players like assist king Voracek and Van Riemsdyk on the line with him. Can you imagine the production from those top two lines?

And while that means that Wayne Simmonds would be moved to the 3rd line, it also gives the Wayne Train a chance to work himself back into playing after all the injuries that he suffered through last season. There is less pressure on him to be a starting Top 6 player right away and can give that 3rd line and extra boost when necessary.

As for Scott Laughton, sure it may be up in the air to if he can be a 3rd line center considering how much he played on the 4th line last season. But in my opinion, Laughton powered that 4th line even with Lehtera as the center on that line.

And you are really going to trust Jori Lehtera to center a line for the Flyers over Scott Laughton? You’ve seen him play all these seasons, and he has had flashes of greatness; give him the chance to show what he is made of. It all depends on where Laughton is positioned and if Frost makes the team coming out of training camp.

And how about Morgan Frost? I heard that maybe he’s not yet big enough to play a 3rd line center position. But have you seen that kid play? He’s incredible.

Frost finished his season with 112 points playing in the OHL with 42 goals and 70 assists. The kid is fast and knows how to play the game and has a very strong hockey IQ. He is bound and determined to make this team at all costs.

Sure Frost may not be the big man you need at center but who really needs a big man at center anymore. Speed has been a dominant force in the NHL, and I rather see a speedy center that can get to the puck with ease on the ice. Frost is that guy.

I think Frost is going to put on a show at training camp and during the preseason. It’s been done before for the Flyers by none other than Travis Konecny and look at where TK is now.

So with that being said, here are my thoughts on how the lines could shake up opening night in Las Vegas on Oct. 4th.