Your Morning Dump… Where the Celtics have won the summer 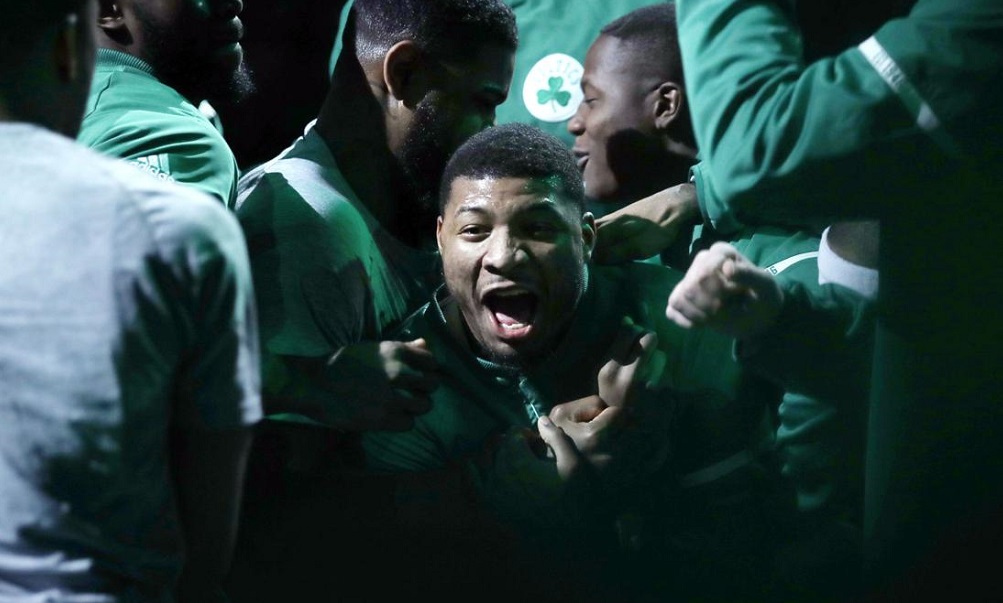 Your Morning Dump… Where the Celtics have won the summer

No one in the Eastern Conference had a better summer than Celtics president Danny Ainge, and all he did was retain a couple of his own free agents, draft a project late in the first round, and bring a veteran expat back from overseas. There were some rumors, as there always are with the Celtics, but they weren’t as breathless as past summers.

Bringing (almost) everyone back from a 55-win team that came within a fourth quarter of reaching the NBA Finals despite the absence of Gordon Hayward and Kyrie Irving was always the priority.

The key to the Celtics’ offseason was retaining Marcus Smart on a reported 4-year deal worth $52 million. That’s a decent amount of money for a restricted free agent who wasn’t yielding offers in a tight market, but there’s a method to Ainge’s madness.

The money is good and the years are long, which should help soothe Smart’s frustration over a process that didn’t go according to his plan. Also, Smart earned that contract with his fearless play and emerging leadership skills. Backcourt Draymond never complains about coming off the bench or doing the dirtiest of the dirty work, which is a great example for a team that figures to go 10-11 deep.

It wasn’t what Ainge did that made his offseason so successful, it was what happened around him. Even when his itinerary is light, everything keeps comes up Danny.

SB Nation: The Celtics won NBA free agency without doing all that much

The Celtics may not have won the summer league, but they did something more important: they won the entire summer. Boston got better while Cleveland got worse, Philly stayed about the same, and Toronto – with a rookie coach and the addition of an enigma while giving up their best player – maybe got better, or maybe not.

If you’re like me, you wanted Danny Ainge to keep the band together to see what they can do if they remain healthy. He did. Baynes returned with no drama, and after a bit of tension, Smart will again impact winning in a green and white uniform.

The only subtractions of note appear to be Greg Monroe (replaced by the healthy Daniel Theis and rookie Rob “Wallet” Williams) and Shane Larkin (Brad Wanamaker being an upgrade, if only because he’s 6’4” and not 5’11”). There’s no apparent reason to believe any further moves will be made before training camp.

Smart made it plain how happy he is.

Marcus Smart is a player always willing to wear his heart on his sleeve.

The 24-year-old is ecstatic that he could ultimately find common ground between his heart and his wallet in his new four-year contract with the Celtics.

Smart never hid his desire to return to Boston as a restricted free agent this summer, but admitted some frustration at the turtle’s pace of the process when free agency began on July 1. Yet any lingering questions the guard had of how much the team valued him were washed away with a signature Thursday that reportedly will guarantee him $52 million to play in the city he calls his “second home.”

And here’s one more angle that can make Celtics fans feel good.

Marcus Smart on his mother’s cancer battle: “She’s hanging in there. This is a hard time but … this is an exciting time for my family. With the signing, it kind of brings a little joy to the situation — to lighten up a situation that was a little dark and gloomy."

MassLive: Boston Celtics guard Marcus Smart on free agency: ‘I didn’t know where I was going to end up’

Globe: Marcus Smart says, ‘Boston loves me, I love Boston’  |  Marcus Smart ‘ecstatic’ to be back with Celtics  |  After strong year as a Celtic, Shane Larkin is still waiting for a new chance

Celtics players seem to be personally building their team of the future. Jayson Tatum became a dad during last season, Gordon Hayward’s wife is expecting, and yesterday Mook Morris became the third Celt to welcome a newborn this month.

Congrats to Marcus Morris. So far this offseason the Baynes, Morris and Horford families have all had babies, and Hayward has had a fantastic baby gender reveal. https://t.co/xDK3led7SE

Of course, there were jokes.

What's in the water at TD garden that all these Celtics babies are being born!

What the hell is in the Boston water lol *Refrains from drinking it* pic.twitter.com/ECpCff3yE9

Okay the Celtics were all living a good life last season… 😂 So many babies https://t.co/9SIaXT2lxk

I can already hear him cussing out the doctor for slapping his baby butt 😂😂 Congrats! https://t.co/5TPXPHfKQV

A former University of Pennsylvania basketball coach who is now with the Boston Celtics has been swept up in a criminal case alleging that he took bribes from a businessman who wanted to help his son gain admission to the school.

The coach is Jerome Allen, one of the biggest basketball stars in Penn history and its coach for six seasons, according to a person familiar with the matter. Neither the coach nor the school is identified in an indictment filed against the businessman late Thursday in Miami, but the filing contains descriptions of a Philadelphia school and its head coach that match Allen’s tenure at Penn.

Allen, whom the government refers to as Coach 2, isn’t charged with a crime. But prosecutors say the businessman, Philip Esformes of Miami Beach, illicitly gave him more than $74,000 in the form of cash, a recruiting trip to Miami and a separate ride on a private jet in 2013 and 2014. Esformes, who was initially charged two years ago, is accused of health-care fraud, money laundering, conspiracy and bribery.

The bribes were intended to help Esformes’s son, Morris, who was a high school basketball player, gain admission to Penn, the person familiar with the matter said. The son began attending Penn in 2015 and is now a rising senior, according to his social media accounts.

Bloomberg: Celtics Coach Jerome Allen Is Said to Have Taken Bribes While at Penn

This is some bad news personally and professionally for Jerome Allen. Even if he is not charged with a crime, Allen could suffer some consequences in his employment with the Celtics – who knows, possibly even being terminated. If he’s lucky, his punishment will simply be to receive the “I’m very disappointed” lecture from Dad Brad.