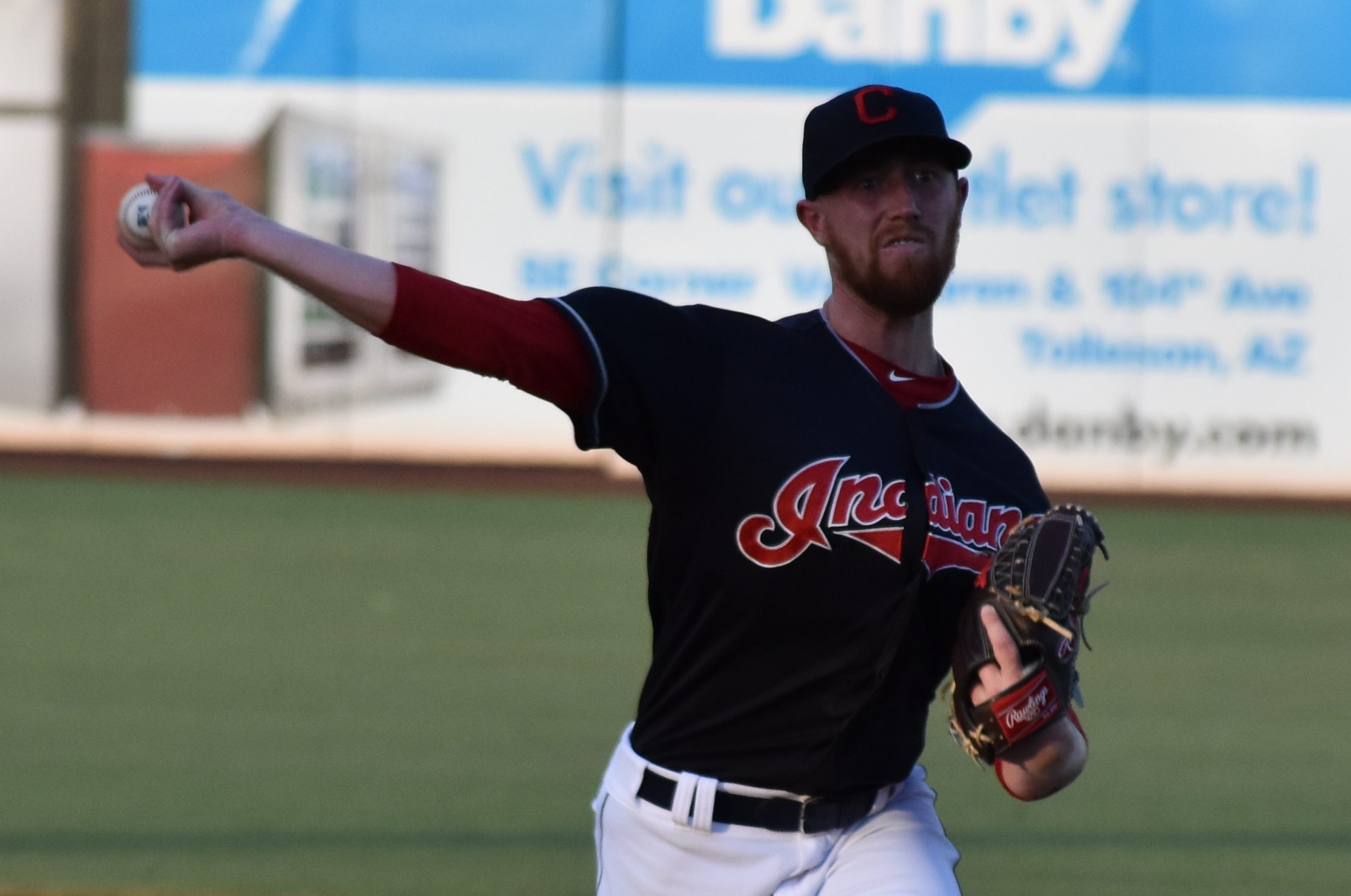 With a record of 19-8, the AZL Indians 1 team has clinched the first half title for the AZL Central and guaranteed a play-off spot for 2018. In fact, their record is a full two games better than any other in the Arizona Rookie League so far this year. Just four games behind, the Indians 2 team also has a solid shot at the play-offs either as the second half winner or, if the Indians 1 win both halves, the second best overall record.

They’ve elevated themselves to this position by winning 8 of their last 11, allowing more than three runs in just four games during that span.While sixth in runs scored (Indians 2 is first), the Indians 1 team ranks fourth in runs allowed and has been significantly better than their counterpart defensively.

Jerez holds the runner on at first while attempting to learn a new position with the 2018 AZL Indians. – Joseph Coblitz, BurningRiverBaseball

Starting with a player many may not be familiar with, Miguel Jerez has been pounding the ball lately and now leads the team with five home runs. After a poor start for the whole team (beyond Richard Palacios) as far as power is concerned, Jerez has hit home runs in consecutive games and three in his last six. He has been very streaky this year, starting off with a .364/.400/.773 line through June 26th before falling to .206/.329/.426 on July 15th. With his last two home runs, that has already increased to .230/.341/.514.

Slight for a catcher (6’1″, 178 lbs), the Indians have handled Jerez’s transition to another position much more intelligently than Francisco Mejia‘s as he is 100% focused on playing the field (he hasn’t caught a game in 2018) and the move is being done in rookie ball rather than AAA. Even so, he has poor instincts in the outfield and is now working at first base to see if that is a better fit. I personally think he will stick in a corner outfield position where he can hide/try to improve his poor first step.

Drafted in 2016, but playing in his first professional season, Raymond Burgos is coming off his worst career game where he allowed two runs in five innings and his first career home run. Overall, he’s had great swing and miss numbers and has now struck out 24 in 24.2 innings with just seven runs allowed. Luckily for him, he was drafted at just 17 years old so he is still only 19 and has not completely out aged the league. This season will be important for Burgos to catch up and he should be able to jump straight to Lake County next year since he hasn’t had issues getting through five innings per start this year.

In a similar situation, Andrew Lantrip is officially on rehab assignment, but is also playing in his first professional season after being drafted in 2016. While not as dominant or ready to go more than one inning, he has had positive numbers. He has allowed five hits and three walks in 5.1 innings across six appearances, striking out six. In his last three appearances, he has allowed two hits and one walk (no runs) in 2.2 innings while striking out three. It should be noted that Burgos was pitching by the end of extended spring training while Lantrip didn’t return to the mound until mid-season in the AZL.

Finishing off with the bullpen, there are two pitchers who stick out above the rest. Hector Figueroa, promoted from the Dominican Summer League this season, has been working for extended appearances of late with seven innings pitched in his last three outings. He has 11 strike outs in 11.1 innings and didn’t allow a run from June 19th through July 18th, a span covering six appearances.

Finally, there is the side-arming, 22 year old lefty Eli Lingos. Lingos was taken in the 2018 draft in round 22 and was likely left at the lowest possible level due to the numbers game. After allowing five runs in his first three appearances, he saw multiple teammates promoted to Mahoning Valley and Lake County while remaining one of the oldest regular members of the AZL Indians 1 team (Wilbis Santiago, the oldest, is four months older).

In any event, since allowing those five runs (three of which came against Indians 2), Lingos has made five appearances covering ten innings and has allowed no runs, seven hits and just one walk. He has struck out 15 in that span, but most impressively struck out seven in three perfect relief innings against the Reds on July 1st. This is exactly the type of performance that lead to the promotions of Adam Scott, Alex Royalty and Nick Sandlin, so I wouldn’t be surprised if he were next in line. Jake Miednik is in a similar situation (same age, same draft, similar numbers, etc), but his season has been a bit reversed in that he started off well, but had a poor game recently.