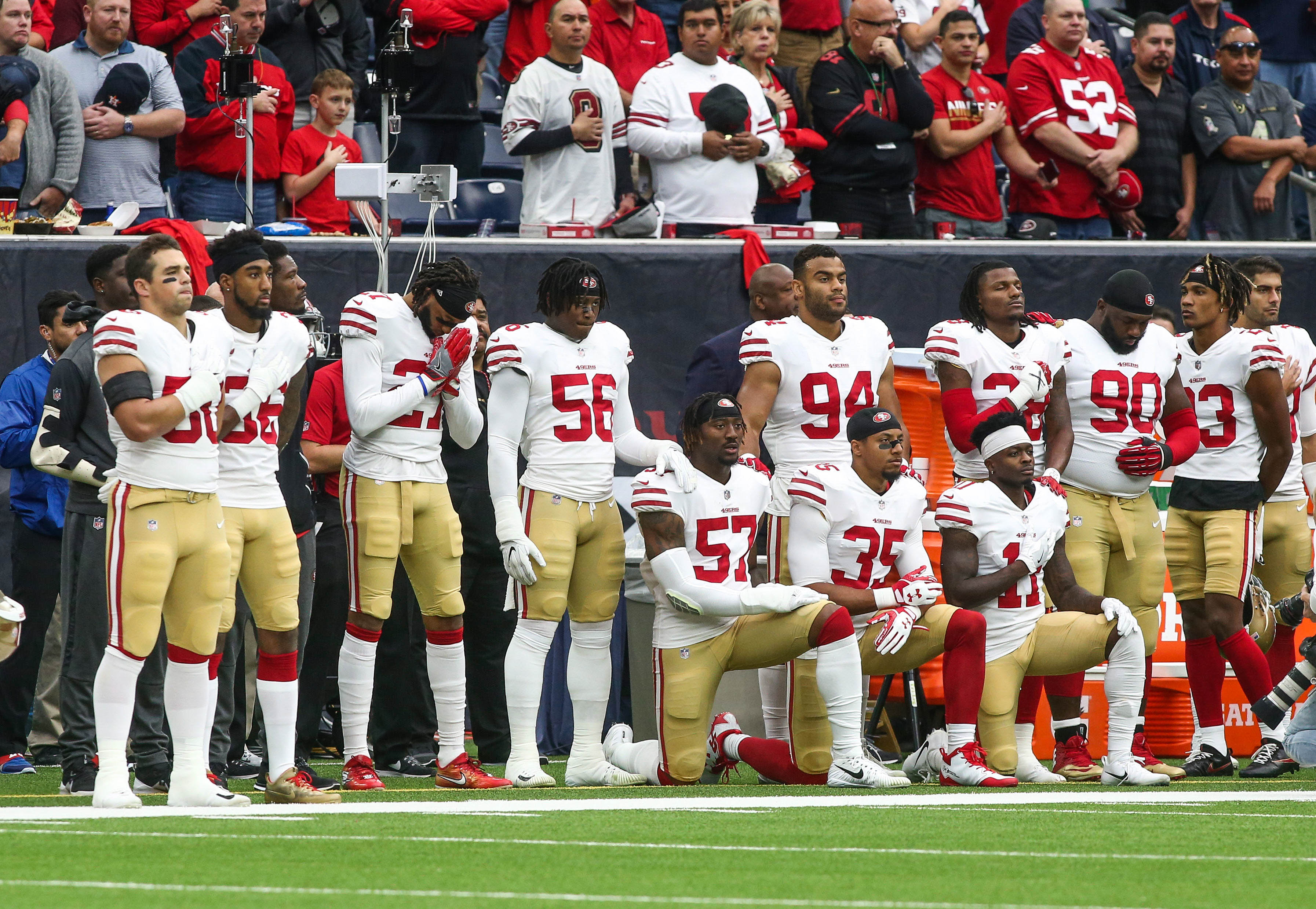 The controversy over the national anthem protests have been a thorn in the side of the NFL that just won’t go away. With the country more deeply divided than it has been since the Civil War, the league seemingly has been put in an impossible position where no matter what they do, roughly half the country will be angry with the result.

Any time the controversy starts to cool off, you can count on the current occupant of 1600 Pennsylvania Avenue to chime in and stir up the pot again. Remember, the NFL owners denied our current president a chance to buy the Buffalo Bills and that’s not something Donald Trump tends to forget. In addition, he uses this issue to rally his political base, so he will continue to do it as long as it works.

But all is not lost. The NFL and players’ union (NFLPA) now have a chance to truly lead the way on these difficult issues the players are protesting. In the process, they can also make the headaches surrounding players kneeling during the national anthem to go away. It won’t be easy, but the fact that the owners and players have agreed to discuss this matter and delay implementation of the zero-tolerance policy unilaterally set forth by the owners last month is encouraging.

It should be possible to build a consensus on this issue for several reasons. The biggest one is that both the owners and the players have a vested interest in keeping the game popular and keeping attendance and TV ratings as high as possible. Higher ratings mean more TV dollars and that results in a higher salary cap.

Another reason is that according to almost all the players involved, they do not intend to disrespect the flag or the military, but they want to raise awareness of some systemic problems they see in the criminal justice system that disproportionally affect the minority communities where so many of the players grew up and where many of their families live.

Many players have done a lot more than kneel or raise a fist during the national anthem. They have taken action to improve things in their community. For example, last October, three members of the Miami Dolphins who participated in the pre-game protests, Kenny Stills, Julius Thomas and Michael Thomas, went on ride-alongs and simulated training sessions with local police officers.

Today we spoke in the community about accountability as a two way street. (2/5) pic.twitter.com/4Ck8CDSQ4T

Most importantly, we must continue working to build bridges between them and the community, while still pursuing justice. (5/5) pic.twitter.com/yLN6I2jZwx

Imagine if the NFL and NFLPA co-sponsored programs that built a bridge between law enforcement and minority communities. Some players could do public service announcements that the league could broadcast during games which would bring attention to the cause the players are advocating for without any players demonstrating during the national anthem. All parties would benefit including the players, owners, fans, minority communities and law enforcement officers.

The NFL could to continue to have military flyovers before games and to make the patriotic displays that Roger Goodell and the owners have long favored without offending a substantial part of the fan base. Imagine, patriotism and social awareness both being raised during and before the same game.

Imagine NFL and the NFLPA would be working together and leading the way to improving relations between different factions of our fractured society.

This would provide positive PR for the NFL which hasn’t gotten much lately. The NFL somehow always finds a way to make questionable and inconsistent decisions on suspensions and scandals like Deflate Gate, players accused of domestic violence, drug suspensions and Bounty Gate.

If the league’s original proposal were enforced, players could receive a longer suspension for exercising their First Amendment rights to free speech than Jameis Winston got for allegedly groping a female Uber driver earlier this month.

Commissioner Goodell announced that the league was going to delay implementation of the new anthem policy and will meet with the players to try to reach an agreement on a plan that works for everyone. It’s a real chance for the league to not just look good but to do good.

Sports has often played an important role in bringing people together in our society. The best-known example would when Jackie Robinson broke baseball’s color barrier in 1947. That was seven years before Brown vs. Board of Education declared school segregation unconstitutional and 14 years before Congress passed the Civil Rights Act of 1964. There is little doubt that Robinson’s presence on the Brooklyn Dodgers helped humanize African Americans for many people who rooted for a player on their home team regardless of his race and helped make later progress possible.

Now, the NFL and the NFLPA can take another step forward to unite Americans. They key, like in politics, is that both sides need to find a way to talk to each other and not at each other. The chance is there. But will the league and the players take it?