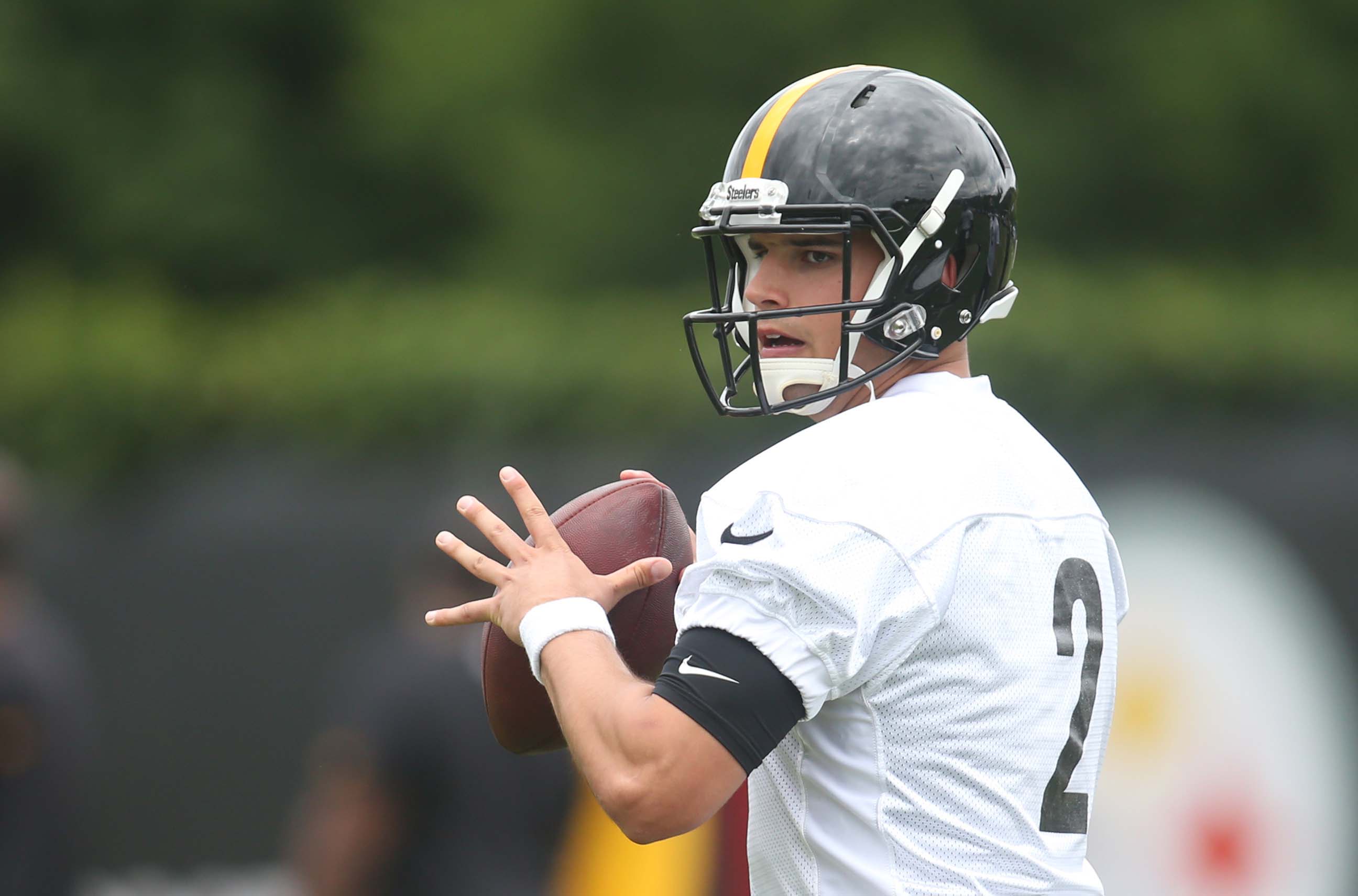 The 2018 Steelers report to training camp at Saint Vincent College in Latrobe, Pennsylvania for the 53rd consecutive year on Wednesday.

A lot has happened since the Steelers’ 2017 season abruptly ended with a 45-42 loss to the Jaguars in an AFC divisional playoff game at Heinz Field. A drama-filled season has been followed by an offseason with a little more drama, and there are enough story lines for an entire summer reading program.

For the first time in Ben Roethlisberger’s career, there is an heir apparent at quarterback.

This is a story line full of subplots. The Steelers chose Mason Rudolph in the third round of the 2018 draft, moving up three spots get him 76th overall. It’s the earliest they’ve drafted quarterback since they drafted Roethlisberger 11th in 2004.

Before Rudolph really can be considered an heir apparent, he’ll have to beat out Landry Jones to become Roethlisberger’s primary backup. That gives Steelers fans a reason to watch preseason games this season. The longer it takes Rudolph to surpass Jones, the louder the “bust” whispers will get.

If Rudolph overtakes Jones on the depth chart in short order, then how will that affect Roethlisberger’s mood? We know that it got his attention when the Steelers drafted Rudolph. He said he wants to play three to five more years. How will it affect his ego if the Steelers have a plan in place for his eventual retirement?

A glimpse into the future at running back

Whether or not Le’Veon Bell will show up to training camp really isn’t a story line. We know that he won’t.

The story here is that there are plenty of valuable reps that could shape the Steelers’ future at running back.

Life after Bell figures to arrive for the Steelers a lot sooner than life after Roethlisberger. No one player can replace Bell, and the Steelers would be wise to take a lesson from the two teams they watched on TV in Super Bowl LII.

Neither the Eagles nor the Patriots had a 1,000-yard rusher, but the former averaged 4.5 rushing yards per game and the latter averaged 4.2 last season

The Steelers need to use training camp to develop a stable of running backs that provides then with a competent ground game post-Bell.

On the bright side for Steelers fans, James Conner really looks like he can be a solid every down running back in this league. Was very impressive during the spring. Needs to stay healthy though. @TheAthleticPGH

Conner’s rookie season ended with an MCL tear last season. He’ll be joined this August by Stevan Ridley, who has averaged 4.2 yards per attempt in his career, matching his clip in 26 carries for the Steelers last season. Jaylen Samuels, a 5’11”, 225-pound rookie drafted in the fifth round, is an H-back type who could come in handy in goal-line situations.

The question isn’t whether or not any of these backs can take the baton from Bell starting in 2019, it’s whether any combination of them can give the Steelers a toolbox of interchangeable parts at the position.

Todd Haley is out and Randy Fitchner is in at offensive coordinator.

Fitchner was the Steelers’ quarterbacks coach for the last eight years and will remain in that role.

Haley couldn’t quite translate all of the Steelers’ offensive talent to the scoreboard, and he couldn’t always get along with Ben Roethlisberger. Haley is now running the Browns’ offense and the Steelers’ trip to Cleveland is a juicy Week 1 story line, but as far as training camp goes it will be interesting to read between the lines when Roethlisberger talks about his new offensive coordinator. Listen for subtle jabs at Haley.

How will Antonio Brown get to camp?

Last year, Antonio Brown showed up to Latrobe in a chauffeur-driven Rolls-Royce.

Could he tone down the extravagance a little this year?

OK, so Brown’s means of transportation isn’t the real story line here. The underlying concern is whether or not the Steelers have learned their lesson from a 2017 season that was filled with drama and a lot of talk that they couldn’t back up.

From Mike Tomlin saying the Steelers should “win it all” in November to Le’Veon Bell tweeting that he was looking forward to Round 2 against the Patriots with the Jaguars awaiting the next day, the Steelers would be wise to make their statements on the field in 2018.

The Steelers won 13 or more games for only the fourth time in their history last season, a home loss to the Jaguars in the divisional playoffs isn’t how the season was supposed to end.

It would be nice to hear Tomlin talk about a culture shift to a more no-nonsense approach this season. And if Brown wants to make a show of his camp entrance perhaps he could ride in a mail truck to signify that the Steelers will finally deliver on their championship potential this year.

Ryan Shazier figures to make an appearance in camp and once again play an inspirational role as he continues his recovery from last season’s career-threatening injury.

But will inspiration be enough for the Steelers to plug a hole at inside linebacker that’s big enough to be the new open end of Heinz Field?

This is not only a position battle, but it’s a question of whether the Steelers can put someone with NFL-caliber talent next to Vince Williams.

The Steelers signed journeyman Jon Bostic as a free agent. This is his fifth team in six years and he missed the 2016 season with a broken foot. Pro Football Focus did give him a No. 12 grade against the run among inside linebackers in 2017, via Rotoworld.

Tyler Matakevich, a seventh-round pick in 2016, has never started a game and he’s played just 79 defensive snaps in his first two seasons, according to Pro Football Reference.

The Steelers didn’t draft an inside linebacker but they did sign Matthew Thomas as an undrafted free agent. Thomas’ career at Florida State was marked by injuries and suspensions. He had just four sacks and one interception in four seasons, but he did have 25.5 tackles for loss during that time.

The Steelers’ best bet might be Thomas leaving his off-field baggage behind and turning into an undrafted gem. They drafted safeties Terrell Edmunds in the first round and Marcus Allen in the fifth round, trying to sell the importance of sub-packages as a reason for not taking an inside linebacker.

If the Steelers can’t line up two legitimate inside linebackers on first down, however, it will take a ton of creativity to hide what is probably their biggest weakness heading into 2018.