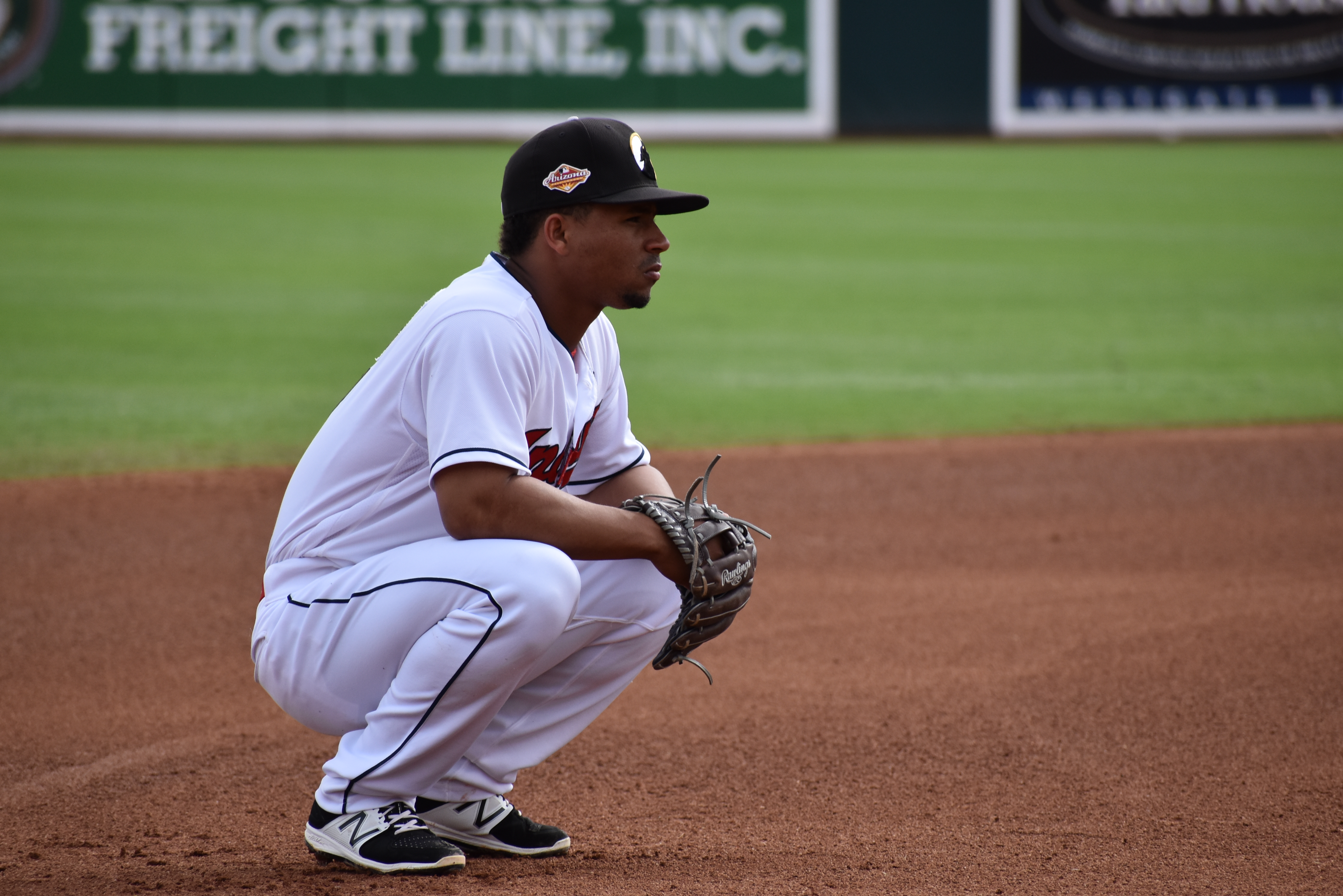 All three were top prospects and all three had decent, but not incredible seasons in AAA before being promoted. The first two couldn’t have more divergent career paths while the third stands at the precipice. Thome will be inducted into the Hall of Fame this year after putting up a 72.9 career WAR while Marte ended his MLB days with a -1.1 mark.

This is not to speak ill of the dead, but Marte is certainly the most prominent prospect bust in recent memory. There have been many big named prospects in between who succeeded including Francisco Lindor (ranked #9 going into 2015) and Carlos Carrasco (ranked #41 going into 2007) and a few who failed, but none have had such high hopes and failed so spectacularly.

What this has to do with Mejia is to point out something we all already know. He could fail entirely or become a Hall of Famer. However, he’s already passed the toughest test. While people remember the prospects who fail at the MLB level, if you just consider the overall number of players in the system (about 35 players in DSL, 50 in AZL and 25 in short season, A, AA and AAA) with around 30 more being added in the draft in addition to a few international free agents, it’s obvious that the vast majority of minor leaguers drop out at the low levels.

Mejia bats during for the 2013 AZL Indians at Goodyear Ballpark. – Joseph Coblitz, BurningRiverBaseball

Mejia wasn’t a top prospect immediately. He had a good season in AZL, but not to the levels of players who probably haven’t heard of (unless you regularly read about such things) like Oscar Gonzalez. He then had a moderate season in Mahoning Valley and a poor year in Lake County before really taking off both in Lake County and Lynchburg in 2016, a season that propelled him into the national spotlight thanks to a 50 game hitting streak. It was after this point that he was added to national prospect lists.

At Burning River Baseball, we started our serious minor league coverage with a full staff in 2015 and in our first rankings, Mejia did not make it into the top 30 (Nellie Rodriguez was probably the biggest miss of those who did at #12). Of the individual voters, four of seven had him in their top 30’s (Danny Cunningham had him highest at 14) and most of these had him between 20 and 30. This was before his national prominence and essentially it was those who saw him in person (myself in Arizona, Caitlin Boron who was covering Mahoning Valley and Mike Melaragno who saw him in Lake County) who ranked him at all.

After the 2016 season, Mejia jumped up our rankings to third overall, behind Bradley Zimmer and Triston McKenzie. He lost his qualification by making it to the majors in 2017, but had he been eligible, he likely would have sat either first or second, again behind McKenzie. To make a long story short (too late), I’ve been watching Mejia since 2013 and we’ve given him top prospect status since we’ve been calling players prospects.

The most basic of minor league observers caught onto Mejia because of his hitting streak, but there are a lot of ways you can have a long hitting streak, including being extremely lucky. Looking deeper, you could see that he doesn’t walk much and doesn’t strike out much either, which shows the real reason that Mejia sticks out and why he is so prone to long hitting streaks. He swings early, often and hits the ball hard. If he gets four at bats, he’s probably going to put the ball in play three times and it will be hit well enough that one should drop.

So, the Indians had a power hitter who didn’t strike out much and, while he didn’t walk much, his high average and overall contact rate kept his OBP high. All that and he played the most premium of offensive positions, catcher.

Mejia rounds third after hitting a grand slam on March 11th, 2017 to give the Indians the lead. – Jennifer Coblitz

This is where I couldn’t disagree more with the handling of Mejia. I’ve already talked at length about the disinformation campaign against Mejia over the recent months before the trade. Now it appears almost certainly that it was an effort to dull Mejia in the eyes of the fans and make him seem less valuable. This has worked incredibly well based on my own personal experiences with Indians fans over the past few weeks as the fan base turned on Mejia, calling him lazy and stating that he is not a team player.

This is exactly the opposite of the truth. He was asked to do the impossible due to the current roster make-up, loyalty and financial considerations of the team. Essentially, Roberto Perez is the worst catcher in baseball in every fashion, but enough people in important positions love him that they weren’t going to use Mejia in the majors as a catcher. However, he was also their biggest bargaining chip (as we already saw him dangled in the failed Jonathan Lucroy deal), and his value would be incredibly lessened in the outfield. Because of this, the Indians couldn’t stop playing him at catcher, which they would have done if they were just looking to bring him up this year, and they couldn’t just play him at catcher in case a trade didn’t materialize.

Mejia never formally said he wouldn’t play any position, only that he wasn’t comfortable at third base after his time in the Arizona Fall League last year and that he wasn’t comfortable in the outfield now. This makes sense. He caught for his entire time in the Indians system and likely quite a bit before then. We saw what happened with Carlos Santana, who was a very athletic catcher, when he tried to play third and the results were similar. When he moved to first, he was initially terrible although he ultimately became one of the best in baseball defensively. This took years, however, not about 30 games in AAA.

Considering only Mejia and the Indians catching situation, they should have sent Perez to AAA and used Mejia as the back-up catcher/DH. They could have his bat in the line-up every day and platoon Yonder Alonso, removing two of the weakest components of the line-up, Alonso against left handers and Perez against anyone.

Mejia swings away during the 2016 Futures Game. – Joseph Coblitz, BurningRiverBaseball

That wasn’t the only aspect to consider, however. Despite many glaring weaknesses, the offense has been fairly prodigious this year and Eric Haase could provide a similar upgrade without having to play every day if they just wanted to replace Perez. In any event, it wouldn’t fix the biggest problem with the team, the bullpen. Trading Mejia did fix that. Unlike the Andrew Miller trade that cost them Frazier, who was the top hitting prospect at the time, as well as the top two relief prospects (Ben Heller and J.P. Feyereisen) and one of the top two starting pitcher prospects (Justus Sheffield), this time the Indians only had to trade one top prospect and received two pitchers in return. While Mejia in this case is comparable to Frazier at the time (although Sheffield could be the real steal of that group), neither Brad Hand nor Adam Cimber are the best relief pitcher in baseball.

Just like the Miller deal, however, the evaluation of this trade will come from the Indians success in the post-season this year more than anything else. Mejia could be an MVP candidate for the next decade, but he wasn’t going to make a big difference this year. Hand and Cimber could potentially make a huge difference in this season and the next few to come. Without bullpen additions, the chances of winning a World Series were nearly zero this year, but without Mejia, the chances of winning a World Series over the next decade don’t change much.

As said in the opening, we still don’t know what Mejia will become. He is obviously more than just some prospect, but he hasn’t surpassed the possibility of becoming a bust yet. The Indians have more players who could potentially supply that potential offense, like Haase, Bobby Bradley and others and, like current Indians Michael Brantley, Jose Ramirez and Yan Gomes have shown, you don’t have to be ranked in the top 100 prospects to become an All-Star.

Mejia swings away against the White Caps DET) on May 9th – Caitlin Boron, BurningRiverBaseball.com