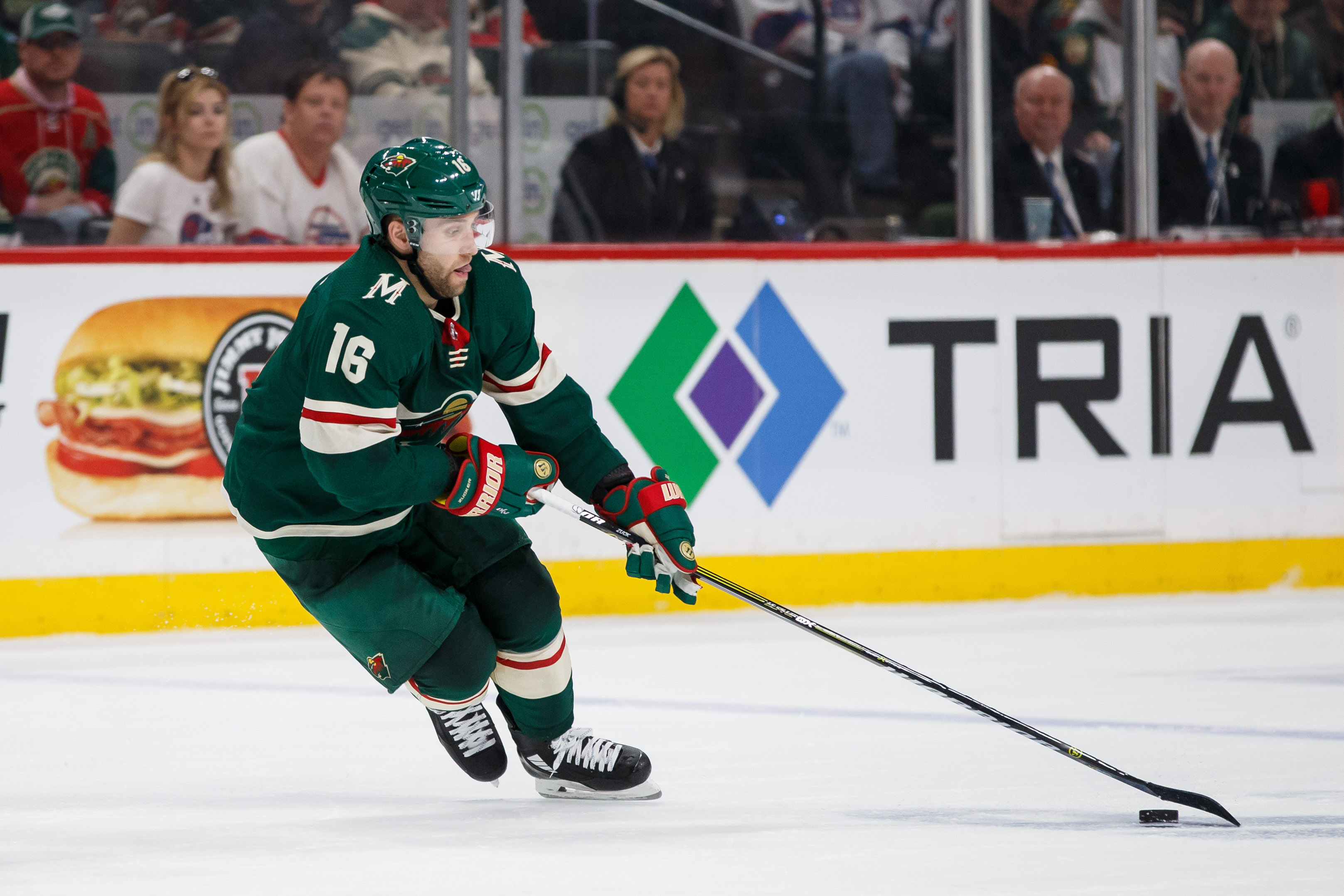 A little over a week ago I posted an article about the Minnesota Wild signing restricted free agent defenseman Matt Dumba to 5-year deal of his own worth $30 million.  In the article I compared the situation where you have two hungry family members eyeing two unequally-sized steaks left after the family has had their fill.  I acknowledged that in most families a compromise would be reached and it would likely be no big deal.  Yet I asked the question whether it would stay that friendly if money was involved.

Now we’ll find out as the Wild reached a ‘compromise’ of sorts with its talented winger Jason Zucker on a 5-year pact worth $27.5 million.  Zucker’s obviously got the smaller steak but it is still a consolation prize that will pay him $5.5 million annually after he comes off a career-best 33-goal, 64-point season.  The Las Vegas, Nevada-native was the Wild’s last restricted free agent left to be re-signed and leaves the team with about $1.7 million left in cap space according to CapFriendly.com.  The deal is a little less than what has been speculated that he was looking for a bit more than $6 million per season but no doubt the stability of a 5-year deal helped make it more palatable.  I would not be surprised if there is some sort of modified no-trade agreement for at least part of the 5-year pact as well as much as Wild fans loathe their inclusion.

With his arbitration date approaching soon, many expected the Wild to reach some kind of deal today.  You can hear Wild General Manager Paul Fenton‘s comments on the signing here.  Otherwise, with a 48-hour filing period for arbitration the outcome would likely have been pretty ugly for both parties.  It would’ve probably meant Zucker would’ve signed a 1-year deal that the team could not attempt to extend until January 1st which probably would have had him testing unrestricted free agency instead.  An arbitration hearing at this point would’ve been about as comfortable as a case in family court where parents are arguing about the custody of their children as they lob damning reasons back and forth at one another.  Luckily, that situation was averted.

Zucker has stated emphatically his want to stay in Minnesota and as a player whom the team drafted and developed he’s arguably one of the franchise’s best home-grown successes.  After starring at the University of Denver, Wild fans were tantalized with his scoring ability and speed and almost instantly he became a fan favorite.

As you can see from the video of his first NHL goal, you can see why.  A player who is creative, fast and celebrates with genuine enthusiasm on a team that at times can be accused of being a bit bland.  It took a while for Zucker to earn a permanent spot (perhaps longer than it really should) but once he did he’s been one of the Wild’s best scoring threats despite not logging much in the way of power play time.  Hopefully with a bigger contract, he’ll get more opportunity on the man advantage.

The other win is for local charities where Jason and his wife Carly Aplin are super visible community members.  Even though there are players with more name recognition than Zucker, he seems to be the most active and that is a PR win for the organization.  He has been an outstanding citizen for the team and it is good to see him rewarded.  The term and cap number seems sensible given his age and potential for future production.  Even some kind of modified no trade / no movement clause doesn’t bother me because he’s not an old player on the decline.

I know Vegas Golden Knights’ fans were hoping for Zucker to return to Sin City, but that will be put on hold for the foreseeable future with this deal.  Wild fans are certainly happy to hear the news of his deal as well as the tweets below indicate.

Had the chance to meet and interview @Jason_Zucker16 a few years ago when he spoke to area athletes at the Mayo Clinic Sports Medicine Center. Genuinely nice guy, glad to see him in a Wild sweater for a few more years https://t.co/n2ucBlW2Nf

Playoff scoring has been a struggle for the Las Vegas-native, scoring just 4 goals in his last 31 playoff games.  No doubt the Wild need more offense not just from Zucker but almost everyone if they expect to be more than a one-and-done team in the post-season.  As far as we can tell, Zucker hasn’t been injured or had other extemporaneous reasons as to why the playoff scoring hasn’t been there.  Yet as this clip below demonstrates, we know he has the ability to make some remarkable plays in clutch moments like this overtime playoff goal against Chicago.

So he will have time to fox this and as part of the team enters into its mid-30’s hopefully Zucker’s role will expand and thus reward the team with even more goals and points.  So relax Wild fans, the team appears to be set in the next month and a half before training camp opens.  What do you think of the Jason Zucker signing?  Tell us on Twitter @CreaseAndAssist or in the comment section below.