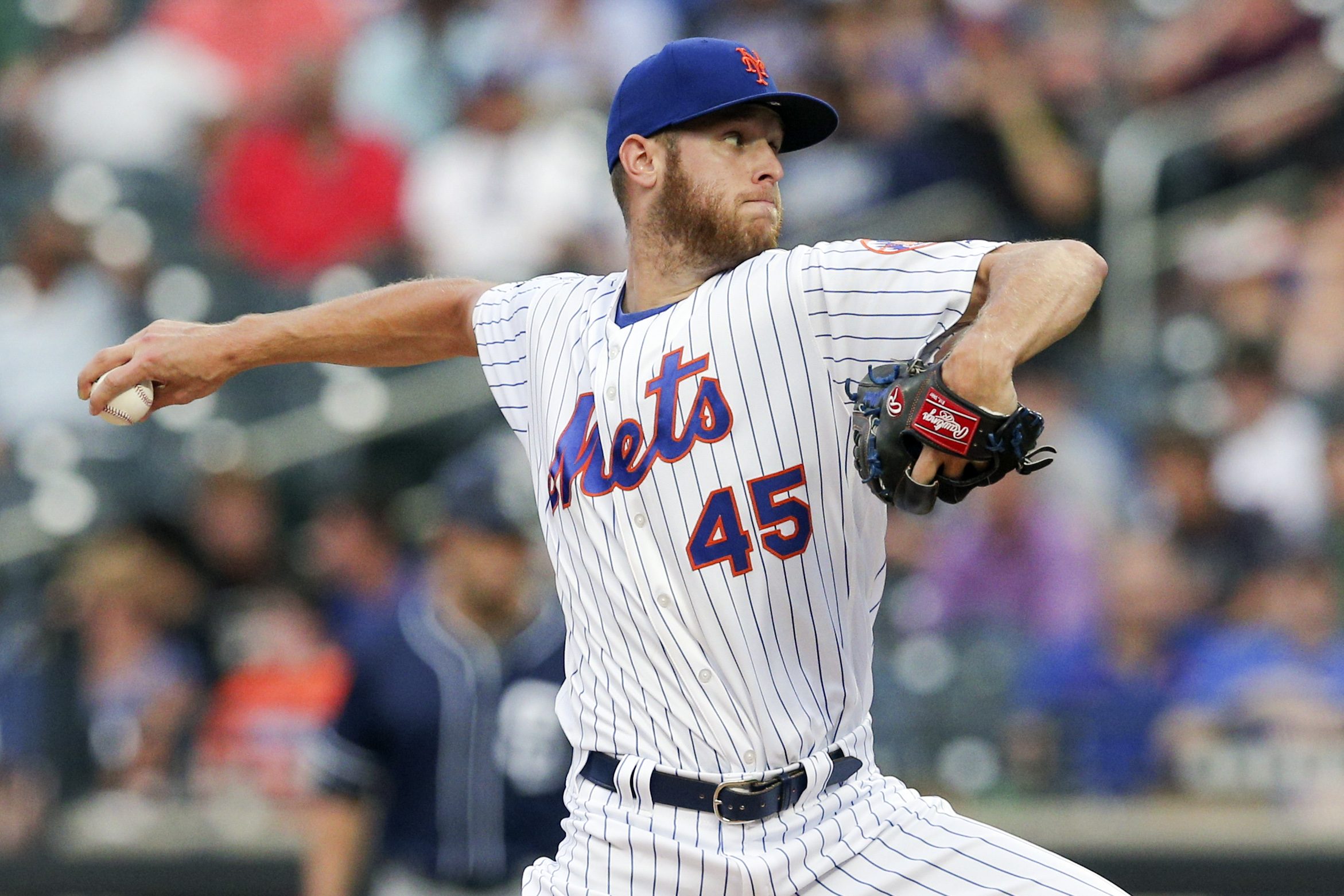 The starting pitching market is starting to move, with J.A. Happ on the verge of going to the New York Yankees and Cole Hamels being linked to the Chicago Cubs. There isn’t a lot of quality available on the trade market, so one of the big names left on the board should be New York Mets’ right hander Zack Wheeler. Wheeler has pitched very well of late, going 2-0 with a 3.03 ERA in his last five starts, making him a prime trade candidate. The Mets should also be able to take advantage of the fact that Wheeler has an extra year of team control left after this season, which should allow them to ask for more back than a pure rental.

Even though it makes all the sense in the world to move Wheeler as close to the July 31st deadline as possible to maximize a return, the Mets appear split on what to do. FanCred’s Jon Heyman reports that rival executives believe the Mets won’t trade Wheeler, even though he is being discussed in trade talks, because they believe they can win next year. If that is really how the Mets are thinking, that is 100% the wrong reason not to move Wheeler. The reason not to trade Wheeler is if a team doesn’t meet the Mets’ asking price, which should be a young position player who is close to big league ready and another minor leaguer with upside. If the Toronto Blue Jays were able to get Brandon Drury, a good player without a spot on the New York Yankees, and talented prospect Billy McKinney for two months of Happ the Mets should be able to do better than that for Wheeler.

The idea that holding on to Wheeler somehow improves the Mets’ chances to win in 2019 is a foolish one that the front office needs to move past. Wheeler has a checkered injury history, missing two full seasons with Tommy John surgery and the majority of last year with more arm problems. Even with a solid run of starts under his belt since June 1st, Wheeler is still just 4-6 with a 4.33 ERA on the season. There has definitely been some bad luck on Wheeler’s ledger, but that kind of production is replaceable in a starting rotation. The Mets could probably get similar results from using Seth Lugo in the rotation full time since Lugo is 13-8 with a 4.06 ERA in his career as a starter. Even if the Mets opt to leave Lugo in the bullpen for the rest of the season, Corey Oswalt has shown enough to warrant an extended run in the back of the rotation to try and earn a job in 2019.

One team that makes a lot of sense for Wheeler is the Milwaukee Brewers, and MLB Network’s Jon Paul Morosi reports that the two sides have discussed a deal. The Brewers are in desperate need of starting pitching and have hit the skids over the past few weeks, having gone just 5-11 over their past 16 games to fall out of first place in the National League Central. One guy who could fit the Mets’ needs is outfielder Corey Ray, who is the Brewers’ fourth best prospect according to MLB.com. Ray is playing for the Brewers’ AA team in Biloxi, batting .261 with 20 homers, 58 RBI’s, and 32 stolen bases in 99 games this season. The Brewers selected Ray in the first round of the 2016 draft, and he has the ability to be a starter in center field in the majors, something the Mets really don’t have right now. The Mets may need to toss in another player to land a guy like Ray, so a guy like Wilmer Flores could also be included to help Milwaukee try to win now. The two teams did reach a deal last summer, when the Mets sent Neil Walker to Milwaukee in August for minor league reliever Eric Hanhold.

There have been reports that up to a dozen teams have checked in on Wheeler, whose stock will never be higher. Unlike Jacob deGrom and Noah Syndergaard, waiting to trade Wheeler until the winter would be a poor choice since there will be a lot more pitchers like Wheeler available in trades or free agency. The Mets need to strike while the iron is hot, and while deGrom and Syndergaard could be essential pieces if they hope to win in 2019, Wheeler is not. If teams are willing to give fair value for Wheeler or overpay, the Mets need to make the deal.