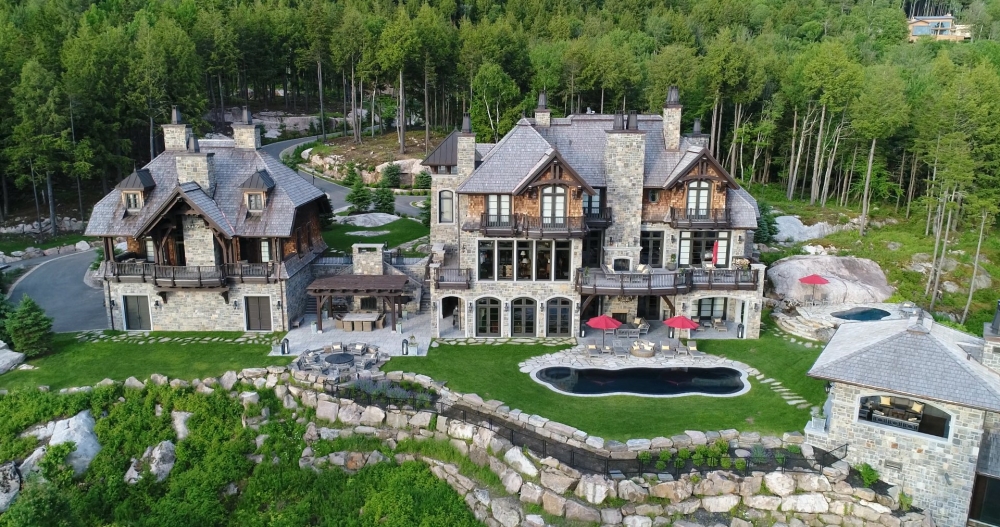 All significant news related to the Penguins and hockey in general has dried up. All the action right now is off the ice with contract signings and roster tweaking. Goaltender Tristan Jarry signed a 2-year minimum wage deal on Wednesday while other teams and players are working their way through arbitration hearings.

… his massive chateau in Quebec.

If you’re suddenly enraged, shredded your clothes and just cursed the Pensblog because you thought this was an article about Lemieux selling his stake in the hockey club, you need to urgently seek professional help for unresolved anger management issues. Then do some cursory research on average professional sports franchise values.

But seriously, in addition to his palace near Pittsburgh – site of many Stanley Cup parties, Lemieux personally purchased land in his birth province of Quebec and oversaw the five-year erection of his summer home in the famed ski resort town of Mont Tremblant. The building was completed in 2012. After the team’s performance against Philadelphia that spring, who wouldn’t want a far-away manor to flee to?

Now, Lemieux, via his real estate agent, has publicly listed the house for sale at the auspicious price of $21,999,066 (all figures in Canadian dollars). His agent has emphasized that Lemieux is not in any rush to sell. The two-storey house and land were assessed at a combined value of approximately $9.2-million, so Lemieux is seeking more than twice book value.

While everyone is focusing on the obvious reason for the last two digits of the price, I wonder if the first two digits are to honor the Penguins’ first Quebec-born star, Michel Briere. Like Lemieux, Briere was a wonderfully-gifted hockey player and like Lemieux, he was the only other Penguin to have his jersey number retired.

Lemieux’s Mont Tremblant house, officially named “Chateau Fleur de Lys“, is truly fascinating. When a house has a classy-sounding French title and is named for the symbols on the Quebec flag, then you know this is an elite property. It sits on nearly 17,000 square feet of land and has eight bedrooms and nine bathrooms. Each bedroom has panoramic views of the mountains and Lake Tremblant. The roof is partially made of copper much like the famous Chateau Frontenac in Quebec City that Lemieux’s house is modeled after. There are even antique columns imported from a 19th century Indian castle.

As you browse through the pictures below (note the pizza oven) and see how unreal the design and furnishings are, one’s first reaction might be to dismiss it as the flashy opulence of the extremely wealthy. But then you realize Lemieux has earned every penny of his net worth.

He had a God-given gift to play hockey and arrived in Pittsburgh at the crucial, exact moment to use that gift to rescue the joke of a franchise the Penguins used to be. Later, when the club nearly went bankrupt again, he took his deferred salary in team equity and saved the team once more. Eight years later, yet again, he saved the club from relocating by securing the new arena deal and his shrewd business sense was rewarded with the Penguins’ value quintupling under the watch of him and Ron Burkle.

However, everyone has their limits. Despite owning a house like Chateau Fleur de Lys, one can understand his true rationale for potentially selling it and leaving Quebec.

Who would want to be stuck in the same province as Marc Bergevin?