More Eagles TC practice notes--- where it's good to be the (GK) King... 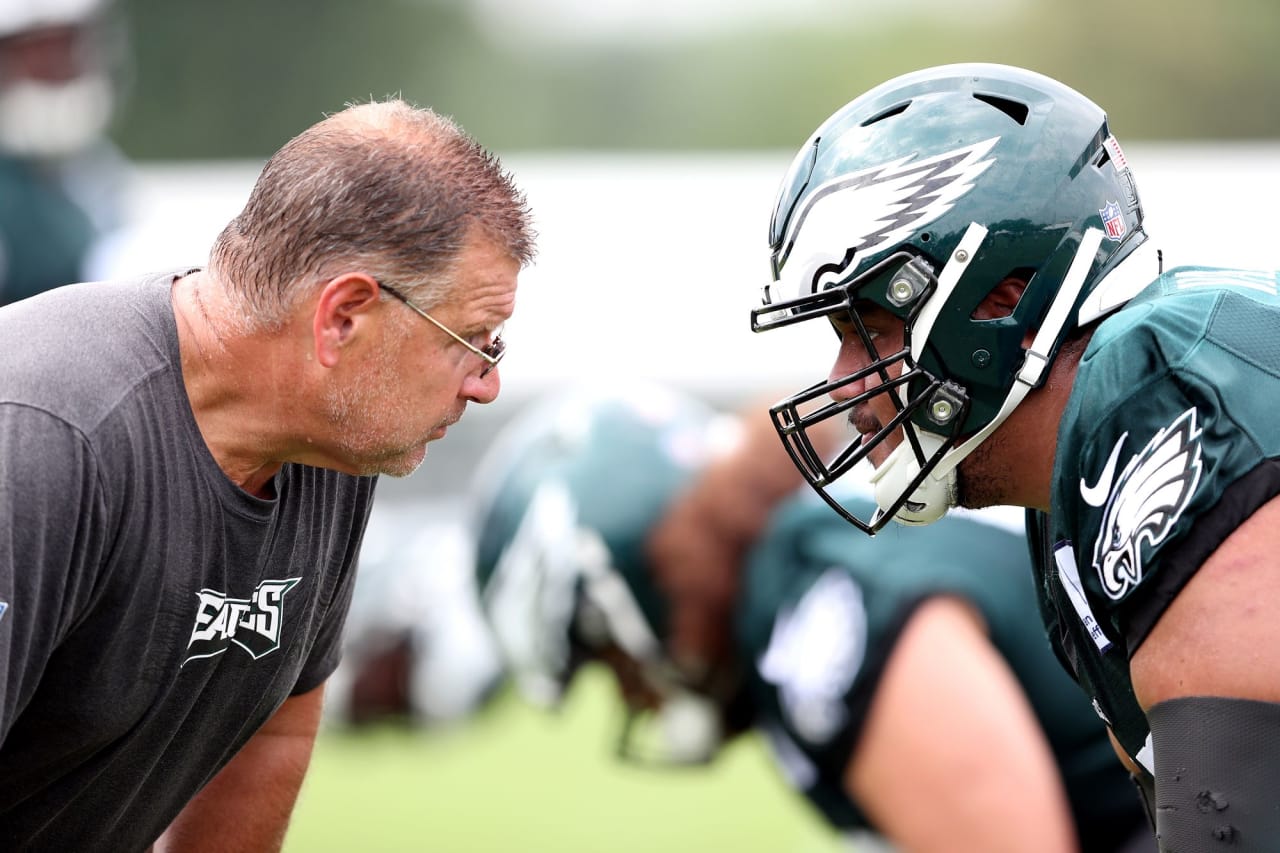 More Eagles TC practice notes--- where it's good to be the (GK) King...

Imagine you are GK Brizer, the legendary Moses of our tribe of Eagles followers for the past two decades. He finally led us to the Land of Milk and Honey after years of wandering in the desert of underachievement. He was and is the Gatekeeper of Evergreen dreams. He deserves a Super Bowl Ring as much as Merrill Reese, if you ask me.

The GK kept us on the straight and narrow with his critical empiricism. He was never a Fan Boy…he demanded critical thinking and posts from us to match. He brought down the tablets from the mountain containing the Ten Commandments of Eagles fandom, and challenged us to live up to the tenets of serious football knowledge in every comment we made. “Hope” was a forbidden word; “Deceptive quarterback mannerism” was a sacred command.

Now I wonder with the rest of you how the GK must be digesting all the gushing reports coming out of Eagles Training Camp in the wake of a championship season.

No wonder he has so far issued a cautionary tale of sorts— Beware the moors, don’t succumb to overconfidence, 9-7 could possibly be in the cards.

So it is I, John the Baptist, who make way for the GK, whose sandal I am unworthy to tie, but lo I tell you this— his message is one of vigilance, and take little comfort from these TC practice updates I am about to give ye…

Fran Duffy was at Friday’s practice, and here is a synopsis of the action he observed:

“Watching the secondary go through individual drills, I couldn’t help but watch the two young corners, Sidney Jones and Rasul Douglas. I found myself wondering, ‘What would this defense look like this Fall if Jones can reach his potential?’ I think the ceiling is sky-high, and with his ability to potentially play both inside and out, I’m excited with how he fits in this group of corners as the year progresses.”

“Individual drills ended and after an extensive walk-through the team got together for some 7-on-7 action, and from the jump I thought the defense had the upper hand. On the very first play, Nick Foles dropped back and looked to hit Mack Hollins on a double move down the field, but the second-year receiver was blanketed by Ronald Darby in coverage. This was a consistent theme that stuck throughout the morning.”

[From what I heard, Darby actually slipped on the double-move but recovered big-time to catch up with the play and broke it up anyway. Problem is, if you’re in real time in an actual game, you’re likely to get obstructed from getting back into that coverage in time to make up for the slip. That’s what GK would say.—TJ]

“Defensive back De’Vante Bausby saw significant action as the nickel cornerback with the first-team defense on Friday. This was a change up from Thursday’s practice where we saw Sidney Jones in that spot. Jones primarily played outside cornerback today with the second-team unit today. Expect to see a steady rotation at the nickel spot throughout camp.”

[Steady rotation, the GK might question? How’s about sticking to a well-defined depth chart where guys know who’s in the lead and how much they have to show to move up the ladder?—TJ]

“Second-year receiver Greg Ward was active in this period. First, he caught a pass from Foles on a deep crossing route near the left sideline. A few plays later, Carson Wentz drove a pass to the same part of the field, where Ward climbed the ladder and came down with the catch just out of bounds. It was a great catch by Ward, but the referees in attendance didn’t give the former Houston quarterback the benefit of the doubt.”

[Channeling my inner GK, I ask what is the purpose of this post pattern? Greg Ward has basically as much chance to make this team as a WR as TGJB99 has to replace Greeg Dobbs as the penultimate power hitter for the Phillies.—TJ]

“The secondary’s strong performance continued, as Foles dropped back and tried to hit Zach Ertz on a corner route on the right side. Malcolm Jenkins was having none of it, as he slid over to that side of the field and pulled in a leaping interception. Cornerback Jalen Mills followed that play up with a pass breakup of his own, as he jarred the ball loose from receiver Mack Hollins on a curl route.”

[Again with the GK impression, what’s the big deal? Our veteran DB’s know the Foles playbook better than  Foles does. They know what’s coming without anything in the way of downfield blocking or strategic picks to stop them.—TJ]

“Aggressiveness at the catch point got the best of Sidney Jones a couple of plays later, as he drew multiple penalty flags on a quick throw to Mike Wallace. The second-year corner broke on the pass but got there early, making contact with the veteran speedster and bringing him briefly to the ground.”

[The GK would say it’s great that the Eagles have professional referees at these practices. It adds a level of reality to the proceedings, and puts the proper fear of the flag into the young’uns.—TJ]

“A couple of plays later, Wentz was mad at himself after he didn’t pull the trigger on a vertical route. He appeared to have both Markus Wheaton and Dallas Goedert open down the field, hesitated briefly, and checked the ball down instead. He clapped his hands immediately and pointed at Wheaton after the play, knowing he should have thrown the ball quicker.”

[This is a classic teaching moment from the GK. You can’t take successful playmaking for granted, even if you are Carson Wentz, arguably the best playmaking QB in the league last season.—TJ]

“Second-year cornerback Rasul Douglas was tested with consecutive double moves in the team session and handled the coverage flawlessly. Douglas stayed perfectly in-phase with receiver Nelson Agholor on a stutter-go and then didn’t bite on the very next play when veteran Kamar Aiken attempted a slant-and-go route. Douglas displayed good discipline on both plays.”

[GK was consistently high on Rasul Douglas early last season when the kid got his big chance to fill in…we who criticized the truth of Rasul’s emerging development were humbled by the GK’s confidence in the kid.—TJ]

“During both sequences where the third-team offense and defense were on the field, tight end Billy Brown came up with impressive grabs down the field. Earlier, Nate Sudfeld hit Brown near the sideline on a diving catch. To close the 7-on-7 period, Joe Callahan hit Brown on a deep corner route for a touchdown.”

[This is where GK calls BS…Spiffo  could come up with an impressive grab in this phase of drills on a pass from Don Pardo, if you know what I mean…—TJ]

“The entire team got together for the first, and only, 11-on-11 action of the morning. The defense got the best of the offense on the first play, as the pressure got home for what would have been a sack of Foles, but the ball got out after the whistle and was nearly picked off by Darby in the middle of the field.”

[This is where GK would point out that his boy Shittu is actually making a strong bid to stick on the 53…He is disrupting stuff.—TJ]

“The defense definitely appeared to be mixing in different blitzes in this session, which can unveil some unusual matchups with some players blitzing and linemen dropping into coverage. One particular rep featured veteran defensive end Michael Bennett dropping to cover Donnel Pumphrey in the flat.”

[This is where GK rolls his EYES and mutters, “yeah, Bennett in coverage…” Don’t try to fool GK with funny stuff. You will never see Bennett in coverage in a real game. Are we just putting stuff on tape to confuse Eli Manning?—TJ]

“Inside at defensive tackle, Destiny Vaeao continued to be the starter alongside Fletcher Cox, with Haloti Ngata and Elijah Qualls playing with the second unit. Linebacker Corey Nelson appeared to play the majority of first-team snaps as the third linebacker in the Eagles base defense. Kamu Grugier-Hill also saw some reps with the first-team as well. The defense will often line up in that package against multiple tight end sets from the offense.”

[Again, GK will point out, Shittu was the real standout on the defensive line in Friday’s drills. We’ll see how good he looks when the actual hitting begins.—TJ]

“Perhaps the best throw of the day came late in the session as Nate Sudfeld dropped back and hit Rashard Davis on a deep corner route down the field. It was a beautifully thrown pass from the third-year quarterback who figures to be a big part of the Eagles’ plans in the future.”

[Oh please, says GK, spare us the hype. As talented as Sudfeld may be, he has no discernible future in Philadelphia. He’s another Kafka, maybe at best another Kolb. One thing the GK demands is to tell it like it is.—TJ]