Your Morning Dump… Where someone defended Gordon Hayward’s honor 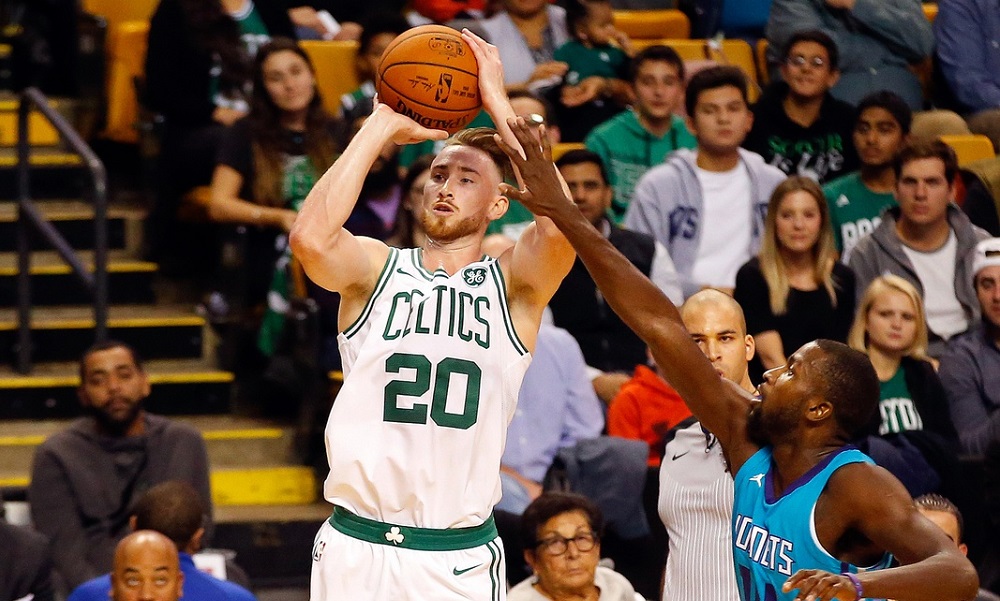 Your Morning Dump… Where someone defended Gordon Hayward’s honor

You probably saw this a few days ago, where basketball non-expert Cris Carter drove his hot-take wagon right over Gordon Hayward.

You don’t see many calling them role players. In fact, almost all of those players (sorry, Blake) were All-Stars this past season.

Not only has Hayward been criminally underrated in comparison to his peers — Hayward registered 10.4 Win Shares in 2016, that would have tied him with Kevin Durant for ninth this season — but the growth of Jayson Tatum and Jaylen Brown, expedited in Hayward’s season-long absence, has led some fans and analysts alike to see Hayward as expendable, an unnecessary piece to the Celtics’ championship puzzle.

Hayward may not be himself at the beginning of next season, but that is okay. The absurd notion that he will be a “role player,” however, is not. Regardless of the emergence of Tatum and Brown, it was and has always been the plan of Danny Ainge and the Celtics’ brain trust to play Hayward with Tatum and Brown, not over them. As multipositional wings, all three players can share the floor, and the depth they represent should allow for all three of them to be fresh come the postseason, another benefit.

Hayward was also, in fact, an all-star in 2017, and he raised his scoring average every year for his first seven seasons in the league. If that’s a role player, give me 12 of them.

It’s wild that many people – not just Carter – have forgotten just how good Gordon is, but maybe we shouldn’t be surprised. Although the photo above proves otherwise, I myself have trouble comprehending that Hayward is actually a Celtic. All we’ve done is wait for him. Remember a year ago, he announced he was choosing Boston, then there was a retraction, and excruciating hours of doubt before his final decision. Then the infamous five minutes of real playing time before disaster, followed by months of speculation about when he would return. At this point, I almost have to see him on the court just to prove he’s a Celtic.

Even so, he’s not a friggin’ role player.

Yesterday was a sad anniversary for Celtics fans, and for humanity.

We lost Reggie Lewis 25 years ago today. Reggie is remembered for his contributions to the Celtics and the city of Boston, both on and off the court. pic.twitter.com/rcZfbzHVmp

In remembrance, the Boston Globe republished an August 3, 1993, column about Reggie’s funeral by the great Bob Ryan.

Reggie Lewis touched a lot of lives, far more than he could ever have imagined. It’s also far more than Charles Barkley, Michael Jordan, Joe Montana, Barry Bonds or Wayne Gretzky could ever imagine. The proof was standing before us on St. Botolph Street yesterday.

These weren’t consumers standing in line to get a chance to pay their respects to Reggie Lewis. These weren’t get-a-lifers hounding players in hotel lobbies for autographs they can peddle. These were sincere, honest, grief-stricken people to whom Reggie Lewis obviously meant a great deal. It was hot out there, and it would have been very easy for someone to take a pass, head to some AC somewhere and watch the funeral service on TV. These people chose to get in that line and swelter. The unofficial estimates indicate that we are talking about more than 15,000 people.

This wasn’t just a case of a generic Athlete Dying Young. This was case of a Very Special Athlete Dying Young. Reggie Lewis was acclaimed and admired not solely because he was obviously very good at what he did, but because of the way he did it. In an age of frightful hype, Reggie was an unintrusive personality who made people like him because he was straightforward and without guile, both on and off the court.

Globe: From the archives: Reggie Lewis touched the lives of thousands, and it came to him naturally

Let’s get the basketball part out of the way: Reggie was a dynamic young player, who had made one all-star team and was on his way to many more. After riding the bench his rookie year, he had five seasons averaging between 17.0 and 20.8 points per game. He shot 48.8% from the field for his career. And he could play defense.

Reggie was named captain of the Celtics, a rare honor, and was going to lead the franchise though the 1990s. His death, coming just seven years after the Len Bias tragedy, was incomprehensible. It devastated the Celtics on the court.

But it wasn’t just that. Although Reggie grew up in Baltimore, he went to Northeastern University and therefore was considered a local kid in Boston. Celtics fans didn’t have to ask “who’s this guy the Cs drafted?” We already knew him – we’d watched him play for four years with the Huskies.

Reggie was a community leader, too, best-known for his annual Thanksgiving turkey giveaways to those in need. He was beloved by everyone.

It was a shock, obviously, when Reggie collapsed on the parquet during a playoff game. It was more shocking when he was later diagnosed with a heart condition that a team of doctors said would prevent him from ever playing again. And then it was inexplicable when yet another doctor said, no, he’ll be okay, he can play.

But no one was ready for what happened next, the news that he had died while shooting hoops. It was crushing. I literally felt like I’d lost a family member. I had accepted that Reggie might never wear the Celtics uniform again, but that didn’t matter as long as he could live life with his wife and family. And suddenly, that was gone. It was a loss that will never be made right.

Here’s one more thought from Bob Ryan about Reggie’s impact.

Athletes become a very real part of peoples’ lives, and a rare few have so distinguished themselves that people embrace them as family…Reggie Lewis, who seldom said boo in public, but who had a sound sense of self and a legitimate moral compass, made the most of his chance.

And, finally… Dunk of the Year

We all remember that Tatum dunk on LeBron’s dome in the fourth quarter of Game 7 – punctuated by  the rook chest-bumping the King. It was a moment that will be on this young man’s highlight reel for his entire career.

Although the NBA ranked this only third best for the season, it’s worth noting that numbers two (LeBron) and one (Giannis) both happened in regular season games. So Tatum’s slam was the Dunk of the Year, Playoff Category.