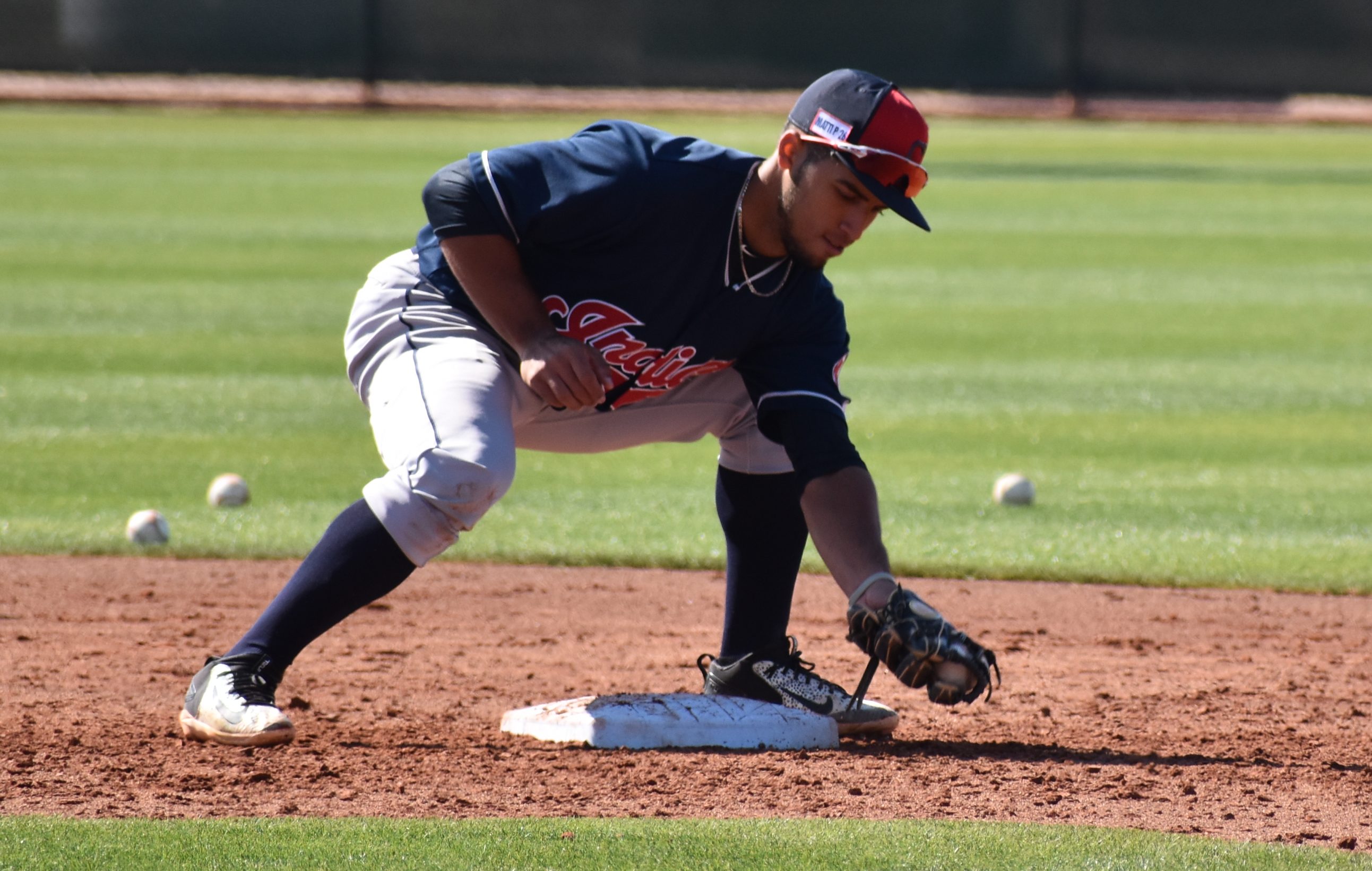 It’s well known that the best players in little league, high school and college play up the middle, and so the majority of infielders drafted play short stop. As players head up in the system, however, these players often drift to the sides and by the time they hit high A, those who have stuck at short will probably continue to stick. This list will attempt to look at those who are playing short stop at a high level or probably will, so some players listed at short like Gionti Turner, Dan Schneemann and Richard Palacios who are actually playing second, will be excluded.

Of those ranked last year, none have become ineligible through trade or Major League call-up, so all three players who were bumped off, Luke Wakamatsu, Alexis Pantoja and Makesiondon Kelkboom, were bumped by higher caliber athletes, two of which were not with the team last year.

A player who went unranked last year and probably could have been this year as well, Fermin deserves credit from turning into a light hitting utility man in AZL last year to a decent offensive player during extended spring and short season this year. While he still hits for no power, his increased walk and line drive rate has severely increased his OBP and his stolen base numbers have risen accordingly. A stellar defender at second, he also plays fine at short and has had a little experience at third. He definitely projects as a utility man at best, but his increased offense has likely granted him a few more years in the minors at the least.

Last year, the Indians had two highly thought of short stops in the Dominican Summer League and both ranked among the top ten. Now that I’ve had a chance to see much more of both of them in person, Makesiondon Kelkboom has been removed (although he still wins the best name competition) as Gonzalez is both the superior hitter and fielder. Gonzalez has missed significant time this year due to injury, but is a high energy defender and base runner who has a great eye at the plate.

Currently on the DL after a poor start to his first full season with the Indians, Berardi has been a flex player between short and second. Unlike his draft classmate that is next on this list, Berardi is a power hitter, who will likely continue his career with a high strike out rate and low average. Like most infielders, he appears to be a better defender at second and his offensive profile is more expected at that position as well. While that shouldn’t matter, the amount of talented short stops at the low levels for Cleveland could keep him off his primary position.

In just his second professional season, Clement has done nothing but hit all the way up to advanced A. Clement’s most notable attribute is his contact rate as he has struck out just 39 times in 577 MiLB plate appearances. In his first season, he split time between second and short, but since he’s become a full time short stop and looks like he could stay there, at least through his minor league career.

When the Indians picked up Stamets, he was considered a potential Gold Glove defender at short who could hit at least well enough to be a utility man. In 2017, he completely changed that outlook with a slugging percent about .100 points higher than his career average. He seemed a good option for a 2017 September call-up or to be the MLB utility man heading into 2018, but a lack of options for both Erik Gonzalez and Giovanny Urshela pushed him to the back of the line, then injuries wrecked his 2018 season in AAA. Now, he’s pretty old for a prospect and behind at least Gonzalez and Yandy Diaz in the depth chart.

He’s burning his first option by sitting in AAA right now, so he could stick around for two more years there, but chances of a bright future are severely dimmed. His best chance now is a trade to another franchise for himself or one of the two major roadblocks ahead of him. In any situation, he likely pans out as a utility man since he can play short, third or second.

I generally don’t even rank the best of the best DSL players, let alone ones who haven’t played a single professional game, but Bracho has so much hype he has to be the exception. He injured his arm at some point between spring training practices (where I saw him play defense and hit batting practice) and extended spring training games, where I never saw him without a cast.

What we know is what we knew before he was signed. He’s a switch hitter with good speed, good range and a solid arm. Hopefully next year we can talk about Bracho realistically based on reality instead of this super player fairy tale.

Delgado stands in the box during a 2018 AZL Indians2 game. – Joseph Coblitz, BurningRiverBaseball

The Indians drafted and signed five players this year that were either listed at short stop or have played it since and the best of those who look like they could stick there is Delgado. He has played the vast majority of his innings at short despite being drafted at third and has been one of the biggest offensive forces on the best offensive team in the AZL.

He doesn’t really elevate the ball, but hits hard line drives and has the speed to turn those into extra bases. His .500 BABIP isn’t going to last, but there is no luck involved in his 17/20 BB/K rate.

Freeman was the Indians top hitter in the AZL last year, but that was nothing compared to the show he’s put on this year in Mahoning Valley. He hits for a high average and doesn’t strike out much, so his lack of walks hasn’t hurt him to this point. While he doesn’t have much fly ball power, he has a tendency towards line drives in the gaps which has lead to a lot of doubles and a couple triples thanks to his speed.

In the field, he has almost exclusively played short, where he has a great glove, but weak arm. In extended spring, he would often switch spots with Jose Fermin during games, playing some second base and this could be where his future will lie.

The biggest mystery surrounding Chang is how he is still on the Indians. He has had power since day one (6 home runs in AZL) and that really showed last year when he blasted 24 for Akron. He’s increased his OBP and average in AAA while playing third for the first time since the AZL and second for the first time ever.

Prior to 2017, there was some question of whether or not Chang could stick at short and if he would be able to continue being a proficient hitter at the higher levels, and both those questions have been answered positively. However, there is no room in Cleveland at third or short stop and he has only just begun at second. With Francisco Mejia gone, Chang now becomes the Indians most valuable trade piece that they essentially have no reason to keep.

Called the next Jose Ramirez much too early in his career, Castro has been known as a slick fielder and a good base stealer since he was signed at 16. While he began his career as a second baseman, he has played exclusively short stop ever since his first season. Last year was a breakout season as he hit 24 doubles, 11 home runs and stole 19 bases for Lynchburg, but he has taken a step back since reaching Akron.

Given the Indians current situation and Castro’s high tendency for miscues, moving Castro back to second could make a lot of sense, although the Indians could be looking at the real long term future with Castro as he doesn’t need to be added to the 40 man roster for another two years. At this point, it seems safe to remove that Ramirez comp and set Castro with a ceiling closer to a low level MLB starter with a floor as a utility man. Of course, there are plenty of players who had the ability, but not the numbers in the minors, who ended up becoming All-Stars.