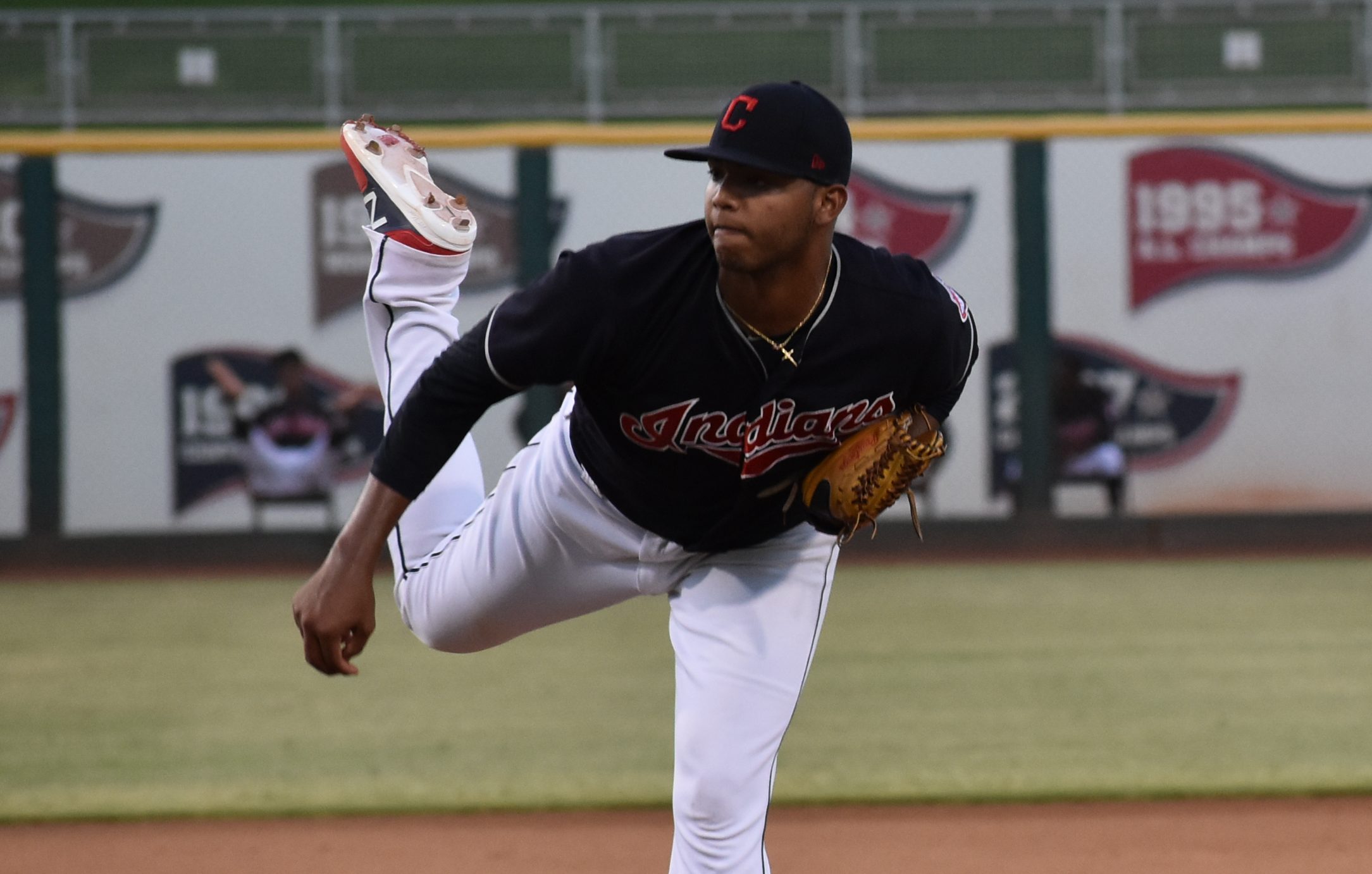 At the end of every minor league season I put together a little report noting the best and worst performers as well as any other topics of interest. This is what I wrote about Luis Oviedo after the 2017 AZL season:

There was little to get excited about in this crop of pitchers as they could easily be blamed for the AZL Tribe’s record, but numbers don’t tell the whole story. Freeman excepted, the infield defense was the worst I’ve seen in years and that particularly effected ground ball specialists like Luis Oviedo. Oviedo finished the year with an ERA near 7.14, but 70 strike outs in 51.2 innings compared to just 22 walks.

I knew Oviedo was better than his numbers in 2017 suggested, but no one expected him to put a season like he has this year. In his first start, he allowed one run in four innings, which wouldn’t be considered a spectacular start except that he struck out eight and allowed just two hits and two walks. Over his next four starts, he wouldn’t allow another earned run, but would strike out 32 to three walks and 13 hits in 24 innings, giving him a 0.32 ERA and some notice within the system for the first time.

Since then, things have come back to earth a bit as he’s allowed seven earned runs in his last three starts with his ERA ballooning to 1.71. With the exception of his July 14th start, however, he has struck out at least a batter per inning in every start this year and including all starts, has not walked more than two batters in a game. The question now remains, which is the real Oviedo?

To start, here are some base stats for the last three years:

Stats like these are why we need more stats. It’s supposed to get harder as you advance through the system, which you could say was what happened from 2016 to 2017, but then it’s impossible to explain his jump this year.

Looking at his controllable rate stats, Oviedo’s career walk rate is now 2.8, so it was a little high last year and a little low this year, but hasn’t been the biggest factor in his change. His K-rate has lowered, which is to be expected as in AZL he faced mostly high school players where short season is largely college players and high schoolers who have completed a year of AZL. In addition, he was 17 in 2016, so his velocity and command should have improved over the last two years as he matured.

His most extreme change over the year has been his hits allowed, the one aspect I predicted may drop thanks to a change in league/infield defense. The chart below featuring his BABIP over the last three years highlights that:

For those who don’t know, league average batting average on balls in play tends to be around .300. While variances of +/- .020 are normal and potentially talent based, anything far beyond that often has to do with poor luck. Pitching in Arizona is the definition of poor luck. First, the vast majority of AZL games are played on back fields, or MLB spring training practice fields. These fields aren’t as well maintained as the MLB stadiums and have very poor lighting. Even when they do play at the full sized big league parks lighting can be an issue as games begin at 7 PM when the sun is setting, temporarily blinding many first and second basemen as well as right fielders. If you’ve seen many spring training games, you know that the Arizona sky is something beyond “wear sunglasses” as many high flies to the edge of the infield have turned into Arizona singles.

Oviedo pitches against the Reds in the first game of the 2017 AZL season. – Joseph Coblitz, BurningRiverBaseball

In addition, you have fielders who are between 17 and 22 and have never played with each other before. This leads to a pile of errors, particularly on the infield. While errors don’t directly effect ERA, they make a pitcher throw more pitches and many plays that should be considered errors are not called as such.

As a ground ball pitcher, Oviedo heavily relies on his defense. It is my observation only, but there were many games last year when he could have been out of an inning had an infielder been able to range just a little further or been able to make a throw on a ball he reached, but just held onto. Many of these plays were not called errors and likely added to that BABIP over .400 last year. As a ground ball pitcher, a .293 isn’t out of the question, although would have more to do with his defense and their range than anything extra he would be doing as a pitcher.

While his decreasing line drive rate likely has some to do with the decrease in BABIP, there have been obvious changes to his infield defense despite most of the 2017 AZL team being brought up with him. The most important of which is the decrease in playing time in the field for Henry Pujols.

While not all behind Oviedo, Pujols had 19 errors last year and the part time short stop Jose Fermin had 16 at short and five at second. This year, Pujols has played just 22 games in the field and has limited himself to 9 errors. Fermin has been moved from primarily short to primarily second and has just two errors at each of his three positions. Errors only tell part of the story, but having seen Fermin play second in extended spring, I can say that he is consistently better there than at short. Fixing those two players and utilizing more of Tyler Freeman at short and the newly added (and since promoted) Richie Palacios at second, has done wonders for the defense behind Oviedo.

Of course, he will not be able to continue his hot start forever and it has already started to cool.

In his last three starts, his walk rate has risen closer to his career average while his K rate has fallen and his BABIP has jumped closer to last season’s. Looking closer at his most recent start in Brooklyn, we can see some of the reason why. In the second, he allowed an infield single that Freeman was unable to turn into an out. In the third, first baseman Mitch Reeves dropped a sure out to begin the inning, then Jose Fermin turned another ground out into a hit.

Oviedo finished the inning with one of the runs being earned, and one unearned although they both could have been unearned. Other than a first inning home run, the rest of his four earned runs and six runs total allowed came off Randy Valladares after he left the game with two runners on. Valladares wasn’t immune to poor defense either though as Fermin committed an error that allowed a run to score during his inning as well.

No infield is perfect, but there is no question that the Indians gets better higher up in the system. Willi Castro, Bobby Bradley and Eric Stamets are all known for their gloves as are current Major Leaguers Francisco Lindor and Jose Ramirez, although their paths may never cross with Oviedo’s. No matter who he pitches in front of, however, his walk and strike out rates are elite (for his career, Triston McKenzie has a 2.7 BB/9 and 11.0 K/9, very similar numbers to Oviedo so far) and no defense can take that away from him.

Oviedo joined BurningRiverBaseball’s minor league rankings last year at #65 in the Indians system and jumped into MLB Pipeline’s top 25 this year as well. People are starting to take notice and Oviedo has to already be considered one of the highest ceiling pitching prospects even if he is still a few years away from the big leagues.